#YesAllMen Should Care About #YesAllWomen 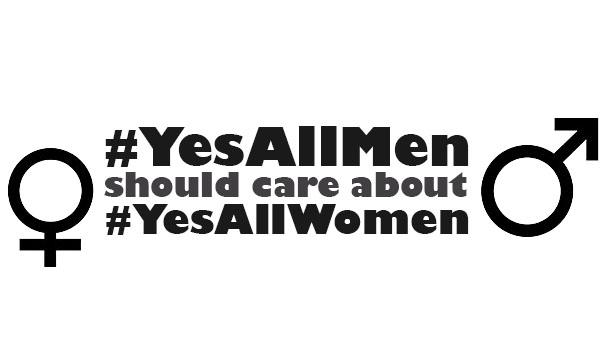 I had no idea when I wrote my last post, in which I declared it was cool to be a feminist, did I realize that within a couple of days we were going to get such a brutal reminder that it's also incredibly important to be a feminist. And incredibly frustrating. And sometimes incredibly dangerous.

Nope. When I wrote that post I had no idea that within a couple of days a misogynist was going to go on a killing spree. I had no idea that women the world over would react by sharing their own stories of everyday sexism that show #YesAllWomen can be (and usually are) victimized at some point in their lives.

And I sure has hell had no idea that these acts of bravery and solidarity would be met by hostility, threats, and anger. But here we are.

#YesAllWomen, but not only women

Now, I understand that the majority of people who read this site are women. But many of you have a man in your life—be it your partner, your child's father, or even your child himself. So, please, have this conversation with them. It's important.

Why should guys care about the #YesAllWomen campaign? Because it shows us that the problems of misogyny and sexism are far more pervasive than most of us probably realized. It shows us that violence against women—actual and threatened—is a daily occurrence for too many. It shows us that a lot of guys actually think women owe them sexual attention just because they're nice guys, among other eye-opening realities.

Go look at the hashtag. Look at how wide ranging and diverse the people using it are. This isn't a small problem. It's not a problem limited to one location, age, race, or social class. This shit is everywhere. Which means it's not just a small percentage of men who perpetrate these acts.

Guys, this is bigger than we want to admit.

And so it is not enough to say you aren't part of the problem. We're supposed to be a civilized, modern society. This is everyone's problem. We have to be an active part of the solution.

All is not lost

By now you'd be forgiven if pessimism and despair have taken root, but there actually is reason for optimism. Because unlike disease or poverty or hunger, this isn't an overly complicated problem to solve. It just requires education and compassion. It takes a willingness to admit that the women who've been shouting about these problems from the rooftops aren't speaking for the minority, but that there is a fundamental problem with gender inequality in our society.

We can't be passive anymore. We can't assume that things will get better on their own. They won't.

So, where do we start? Well, as parents and role models, it starts with us. It starts with raising a generation of allies and advocates. The White Ribbon Campaign has launched a campaign called "It Starts With You," which offers some great resources so start. But don't stop there.

#YesAllWomen isn't about women, it's about all of us who believe that everyone has a right to be free from discrimination, abuse, and violence. And #YesAllMen have a role to play in keeping that message alive.

If you liked this, you might also like: "5 Important Things I've Learned While Raising A Girl" and "I Am A Beautiful Princess: When My Daughter Asks Me To Wear The Tiara, I Wear The Tiara."

Joe Boughner: The Naked Dad That Narrowly-Averted Crisis You Probably Didn't Hear About