Two Men Are Kissing On ESPN! What Do I Tell My Kids?

An NFL prospect celebrated his being drafted by kissing his boyfriend. The sun came up the next day. 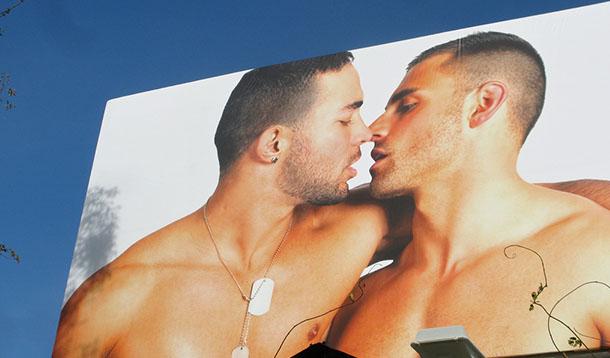 I am a sports fan. I'm not a huge NFL fan, per se, but I generally keep an eye on major sports stories no matter what sport or league. And, as I've written about previously, I'm a major fan of role models in "non traditional areas" (gawd what an ugly term)—women in science, gays in sports, and other such abominations and blights on family values.

So I was well aware that, heading into this weekend, there was a good chance history was going to be made. A few months ago, a college football player named Michael Sam came out to the world (he'd already come out to his teammates, just before going on to his best-ever season as a college player). This weekend was the NFL draft, when he'd have a chance to make the jump to the professional ranks.

Early on things seemed bleak. He wasn't drafted in the first round, but that wasn't a major surprise. But then he wasn't drafted in the second round either. Or the third. Or fourth. Or fifth. At some point, as teams called more and more names that weren't "Michael Sam," things started to get uncomfortable for those of us who'd like to believe society had progressed to the point that someone's sexual orientation wouldn't matter as much as their performance on the field.

This post isn't intended to be an analysis of the reaction. Anecdotally, I saw a lot more positive reception than negative, but that could easily be a by product of the sort of people I surround myself with online.

No, this post instead intends to answer one question in particular that seemed as pervasive as it was perplexing—at least to me.

"ESPN just showed two men kissing, what am I supposed to tell my kid?"

Before I get into this, I should say, I'm not an expert on parenting, human sexuality, or any related areas. But I do have experience in this matter. See, long before ESPN beamed a man-on-man kiss into the living rooms of the nation, for the first time in many cases, apparently, I faced my own Michael Sam Moment (TM).

It was a hot day in August. Or possibly a cold day in November. Honestly, I don't remember.

KID: "My toys are getting married, Daddy."

ME: "Oh cool, who's getting married?"

At this point, I should point out that—quotation marks notwithstanding—this is a paraphrasing of the exchange, not a direct quote. So I don't remember exactly which toys she named.

ME: "Oh, why are they getting married?"

ME: "Sure, sometimes. But sometimes boys marry boys and girls marry girls. And sometimes people don't get married"

And that was that. Now, again, I'm no expert. And, admittedly, I haven't been able to undertake a long-term analysis of the impacts of this dramatic and difficult conversation on my daughter. But, at four years old, she doesn't seem to be rattled by the idea that gender and love are somehow NOT fundamentally linked.

In the aftermath of the MichaelSamGate (TM), I've given this conversation some thought—certainly more than I'd given it at the time or at any time since. Could it really be that simple? Can kids really come to terms that easily with the idea that sometimes a man falls in love with a man? And in my non-expert opinion, I'm inclined to say...

Kids don't come saddled with the baggage of bias or stereotype. Kids have a simpler understanding of love, the lucky bastards. Tell a kid that sometimes boys love boys, and they're just as likely to look at you blankly and ask for more goldfish crackers than they are to have a follow-up question.

So, ESPN showed Michael Sam kiss another man. What do you tell your kids? You tell them that Sam's going to have trouble finding a good fit in the Rams' 4-3 defensive scheme, but maybe his tackling ability will make him valuable on special teams. Then you fill up their goldfish cracker bowl.

It really is that easy. And if it isn't, look back at what you've taught them to date. You made this difficult, not ESPN.

If you liked this, you might also like: "How To Stop Your Kid From Being An Online Asshat," and "It's a Miracle I've Never Raped Anyone."