Alternate title: The fifty-third most awkward onion metaphor on the internet 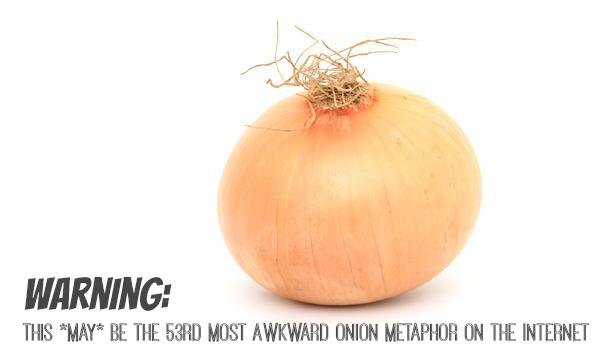 The game is a simple one. Often, when we're out at a restaurant that offers crayons as a pre-meal distraction, my kid will grow bored of colouring and instruct me to cover my eyes. She'll arrange a few crayons into the shape of a letter or a number or some other random thing and ask me to guess what it is.

"Nope it's a W. You're looking at it upside down."

The other day we were at our preferred restaurant for our Daddy-Daughter Dinner Dates and the familiar order came again. I covered and uncovered my eyes as she presented an array of triangles, arrows, Ns, Ms and even a balance beam ("no it's not a line, Daddy, it's a beam like in my gymanstics!"). Then she stumped me.

"Is it two balance beams running into each other?"

"Where did you learn about guns?"

And there we have it. My four year old knows what guns are. She has a rough idea of their shape and she knows that they can kill people.

Granted, I'm not an idiot. I know it would be naive to believe that she could get through life not knowing what guns are. I guess I just thought I had more time... Or something? I mean, where did she even hear about guns? Or see a picture of one? Why does she know that people kill people with guns?

But this sort of thing happens. A few weeks ago we were marvelling that she even knew people killed people sometimes (that one came up when my wife was listening to the news). I don't know if she really understands death, to be honest, or that everyone dies eventually, but she heard a news report about violence in Syria and she knew that somewhere out there someone was killing someone else.

It's like little by little, layers of her innocence are being peeled away. Little bits of reality grab at her and she's exposed to more of the realities of life. Like an onion, each layer is barely noticable (at least to her) but taken in aggregate they start to add up. I know it has to happen. I know she can't be sheltered. She's ready to take on the world more every day and this is the price of admission.

But it still makes me cry a little.

Joe Boughner: The Naked Dad 4 Books All Children Should Have On Their Shelves