There Hasn't Been Enough 'I' in Team

No more excuses. I have to do more. 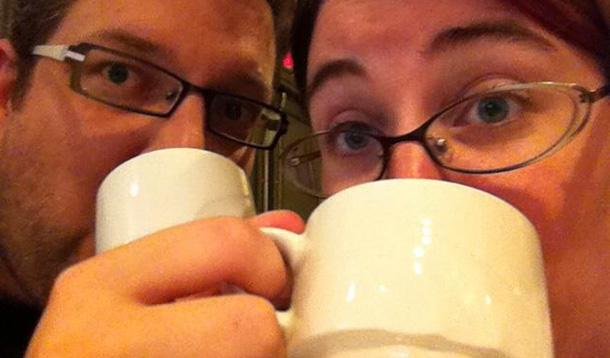 We worked together at a campus newspaper; I was editor-in-chief, she was production manager. We became friends and trusted colleagues over many a late night working together in the office, getting the paper ready for publication. We both joke that after one marathon of all-night staff meetings and computer malfunctions that saw us spend almost fifty consecutive waking hours together without coming to blows we figured there was something special between us. We started dating a few weeks later.

In the early years of our relationship, we often felt like it was the two of us against the world. We both had some false starts getting our careers off the ground and the usual money challenges that so often accompany couples in their mid-to-late 20s but through it all we found comfort and strength in Team Joe and Amy. Together we could conquer the fucking world.

It's coming up on nine years since we met; we just passed six years since we got married. And while that's a small fraction of the time we intend to spend together, it's been long enough to log a lot of miles together and to face down a whole whack of challenges and threats to our relationship. It's also, unfortunately, more than enough time to take each other for granted from time to time.

One of the hardest things we've had to adapt to as a couple is this little person that's inserted herself in our lives, particularly since Amy left the traditional workforce to work part time from home and serve as primary caregiver to the kiddo a little more than a year ago. The team dynamic has changed—dramatically. As Amy herself wrote on her blog last week, "Here’s my husband, who has given up his time for us. He goes to work and we get to have fun. He watches her life from the sidelines so often, and still I choose her. She is my heart. He owns only part of it." Our duo has become a trio.

And here's the thing: I wouldn't have it any other way. I adore watching my wife be a mother. I love that she and my daughter are so close. But it has caused tension. We both see it. We both know it's there. And we're both worried about what it might do to the kid. And to each other.

The fact is, though, that I've let myself use it as an excuse to be bitter and angry too often. I've let it drive the wedge between us. Not consciously, mind you, but looking back over a few tense weeks it's easy for me to see that I've been the asshole, for the most part. I'm the one that's been grumpy and mean and bitter.

My wife and I are unstoppable when we work together. It's time for me to be a better team player again.

Joe Boughner: The Naked Dad I Don't Hate Winter But I Might Hate You