Give your kids independence with these on-the-go snacks 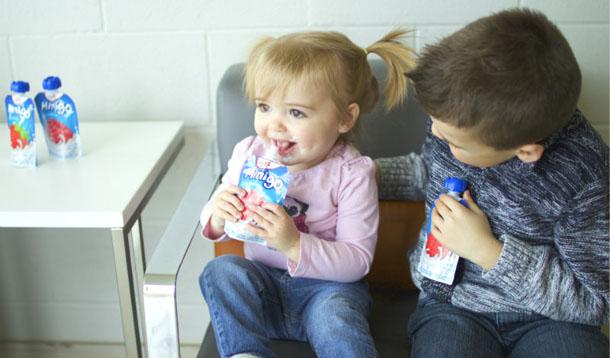 When I became a mother, I quickly learned many new survival skills that make life with kids a lot easier: how to swaddle a baby like a pro, how to transfer a sleeping child from the car to their crib (without waking them), and how to make life on-the-go as easy as possible. There are a lot of amazing gadgets coming out each day that are meant to occupy your little one while in the car, or in their stroller. But when it comes to my kids, having snacks packed and ready to dole out is the key to a successful outing. With babies, snack time is pretty simple. Either breastfeed on-the-go, or pack a couple of bottles.

Tip: With my twins, I used a Blender Bottle and portable bottle cooler to tote around their extra formula. As my kids got older, I had to get more creative with snacks that weren't only convenient, but heathy too.

Today, I have four kids, ages six, five and 20-month-old twins. Between school drop-offs and extra curricular activities, I am always on the go with my little clan. It often ends up being my twin toddlers and I watching the older kids at swimming lessons, or my son's new passion: taekwondo. As my two youngest grow, so does their interest in being independent. This has changed the type of snacks I pack. Gone are the days that I try to spoon-feed applesauce, or yogurt into their mouths. I have had one too many spoons get whacked out of my hand, sending a mess flying and leaving me feeling frustrated.

What are some of my must-have on-the-go snacks? I don't have a lot of time to whip up homemade granola bars, or muffins, so I rely on nutritious ready-to-go snacks. One of my newest favorites is Yoplait’s Minigo Pouches. Our twins not only love the taste, but also the independence the clever packaging gives them.

Oh, and it takes them a while to eat the whole thing, keeping them occupied, which is a huge plus for me! 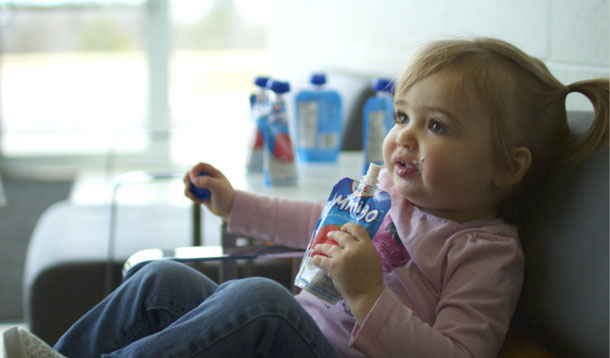 What else do I pack in my bag of snack-arsenal? Here are my go-to healthy on-the-go snack-hacks... 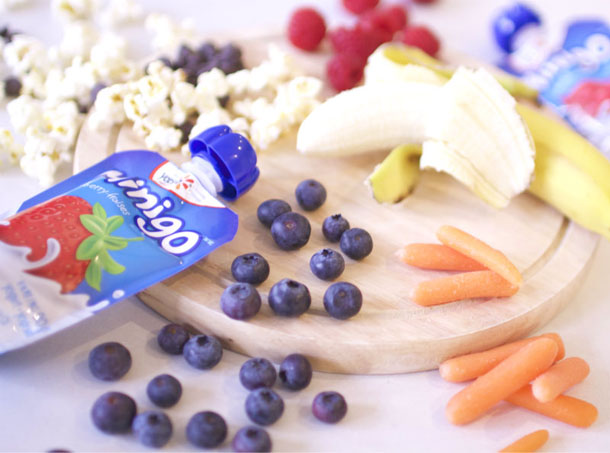 Tip: These travel best in small tupperware containers, especially in Rubbermaid's LunchBlox kits that come with the click-in freezer pack. Adding some hummus, or yogurt to dip is also a great idea, keeps your kids busy and give them some independence. - See more at: 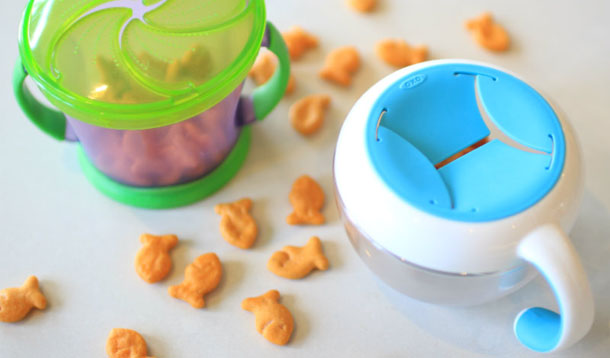 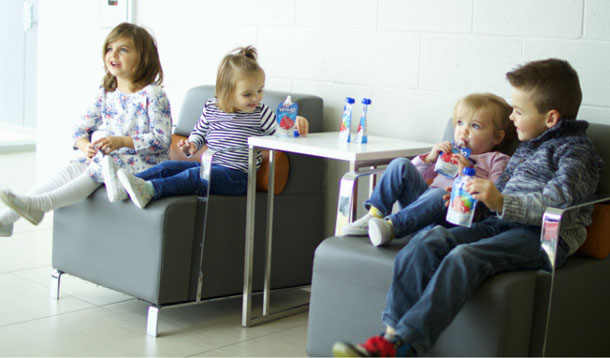 I must admit, these snacks aren't only limited to when we are out and about. Because they're nutritious and convenient, I serve the exact same snacks at home. Let's face it, four kids are active all of the time, regardless of where we are, and need constant refuelling. 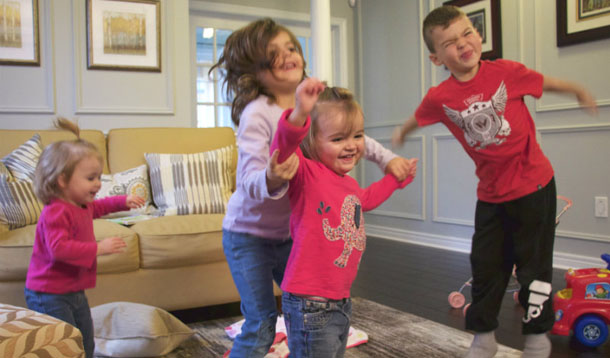 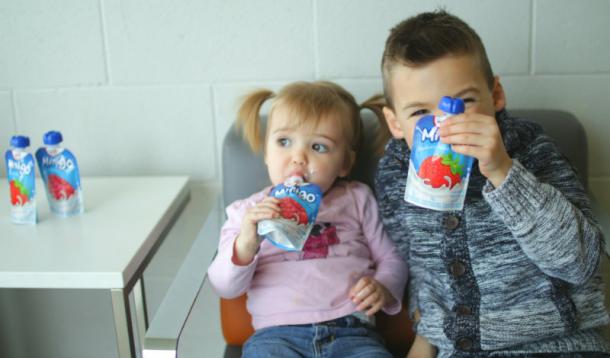 Each new age and stage will present new challenges that I'll need to problem solve and find life hacks to make easier. But I am pretty sure my arsenol of ready-to-go snacks will be sticking around for a long time.

This is proudly sponsored by our friends at Yoplait.
www.lifemadedelicious.ca

7 Un-boring Ways to Decorate Your Walls

Including your kids' rooms

7 Un-boring Ways to Decorate Your Walls 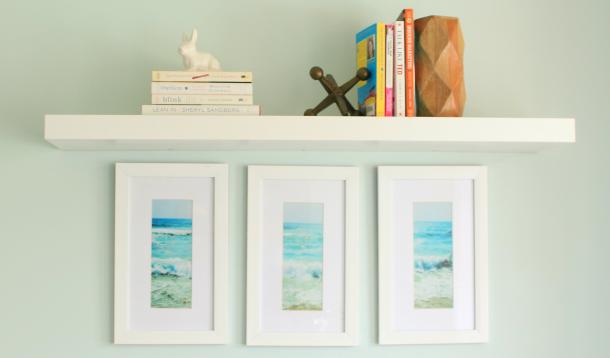 In a past life, before becoming a parenting blogger, I was an Interior Designer. During that time I learned a few tricks. I would spend my days creatively problem solving other people’s décor dilemmas. One area that presented a challenge in every home I worked on was the walls, and how to take them from boring to beautiful.

One of my favorite ways to tackle a boring wall is to create a gallery. But I have added my own spin on gallery walls that take them to the next level.

Here are 7 un-boring ways to decorate the walls in your home, (including your kids’ rooms)…

This is the first step to creating your gallery wall. Whether you are using a series of prints you found at HomeSense, or a collection of black and white photography you’ve taken yourself. You can either hang them portrait-style in a row above a sideboard, or go a little crazy with different sized frames and hang them at random. The number one rule for creating a gallery wall: break all the rules.

2. Don’t leave too much blank space.

Nothing bugs me more, than when I enter someone’s home and they have simply hung a large print on a really large wall. Okay, maybe crooked art bugs me more. But nine times out of ten, your print is not big enough to stand alone, (unless you can find a spectacular oversized art piece). Try pairing a couple other art pieces together beside your focal art. This look will be much more visually pleasing. 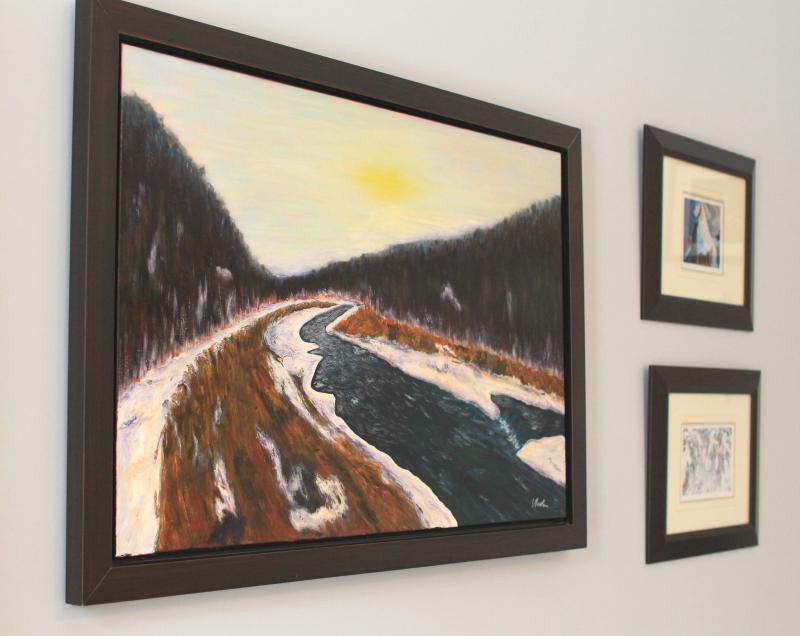 One trick I have used multiple times in my own home is adding a shelf to a gallery wall. This gives more depth and dimension to your wall, and provide a space to showcase special items. What is my favorite go-to shelf? The Ikea Lack wall shelf of course.

4. Show off your favorite books.

Adding books to a gallery wall is a great way to not only store them, but add a bit of your personality. For example, in my office you will find The Tipping Point by Malcolm Gladwell, Lean In by Sheryl Sandberg, and The Happiness Project by Gretchen Rubin. Now you know a little more about me. I always encourage adding your personality to your home’s décor whenever possible, instead of opting for generic items. Tip: don’t always vertically place your books on a shelf, every once and a while pile a few to create interest. 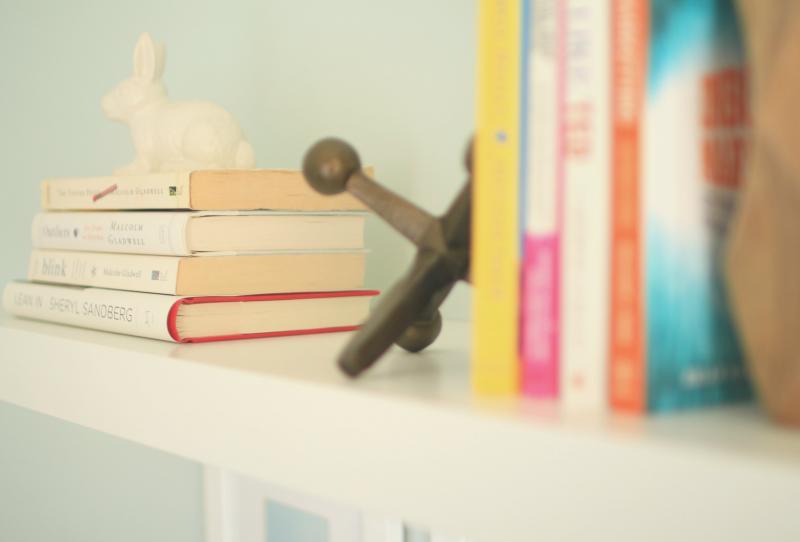 Today we are seeing a trend when it comes to the color palette in homes: white walls. I think this is because white is the perfect backdrop for a great Instagram photo. But try rethinking white, and add a touch of grey, or turquoise to it. The rooms that I love to go a little crazy with colour is in my kids’ bedrooms. There you’ll find teals, yellows and even pinks. 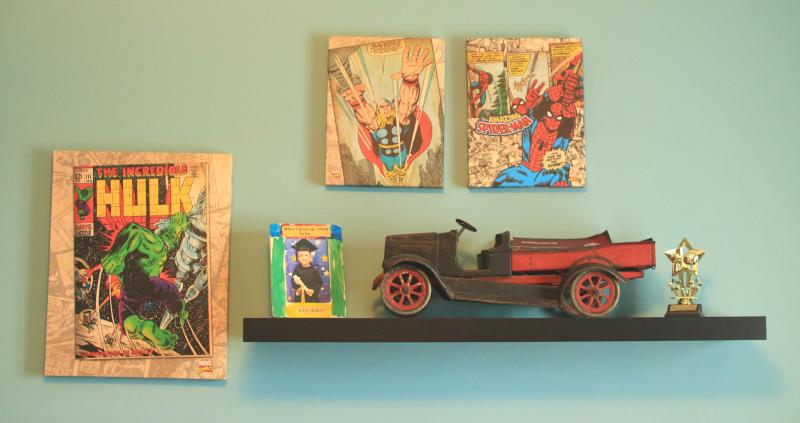 I always try to mix up the materials whenever I am decorating an area in my home, this also goes for my walls. Whether it’s incorporating a yarn wreath, or a metal sculptural item on your shelf, it will add a little warmth and character to your wall. 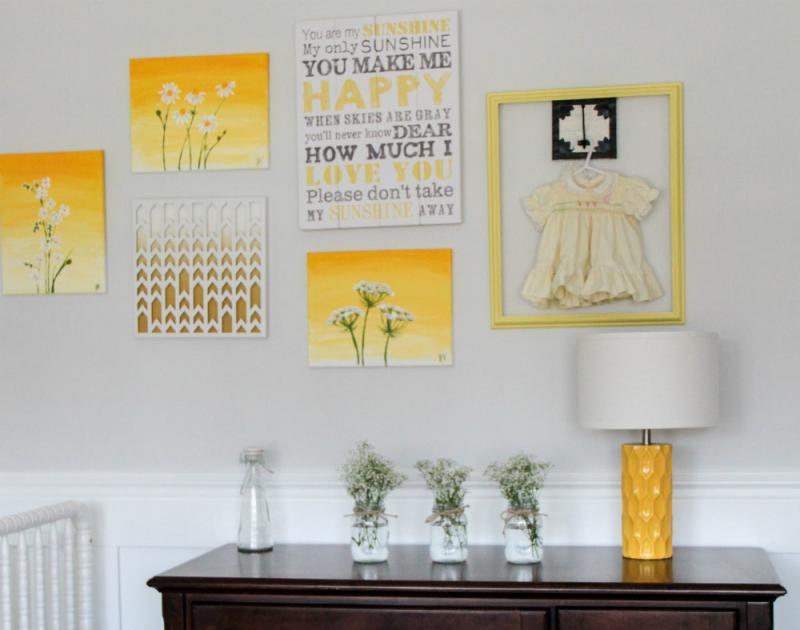 7. Include your antiques and collectables.

In my kids’ rooms, I have found ways to add special items from years passed. In my twins’ room, I found a way to add a dress from when I was a baby to the wall, by finding a decorative hook and frame. In my son’s room, I found the perfect spot for his great-grandfather’s childhood toy truck. Something this special needed to be the focal point in his room. 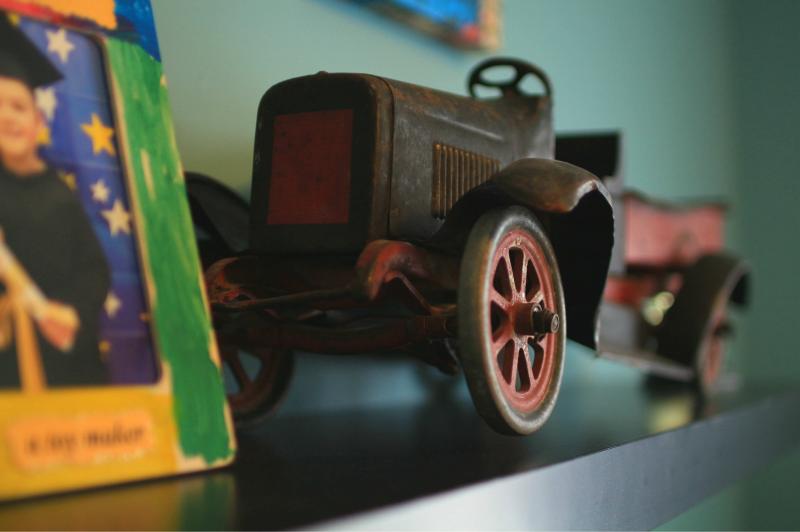 Whether it's your family room, or your kids' room, try to think out of the box when it comes to your walls. Also, getting a lot of those items a little higher is a great way to baby proof but still have nice things.

For more tips on how to decorate and add special touches to your home, head to my personal blog, Nesting Story.

It's called the winter vomiting virus for a reason 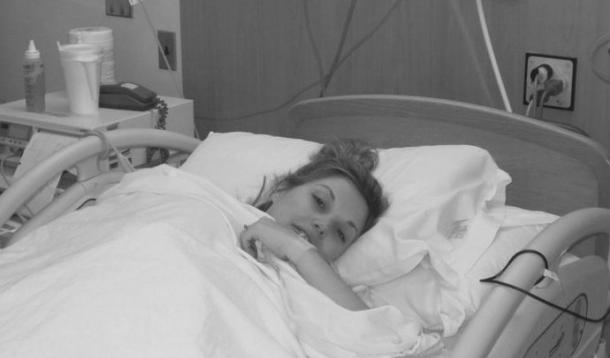 One fateful February night, when I was 8 months pregnant with our second baby, a violent virus ripped through our home, and we didn’t see it coming. 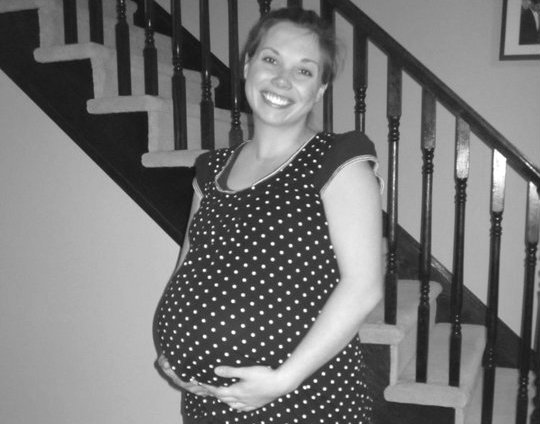 Although I felt huge, I knew that our little girl was still comfortable in my tummy. Friends of ours were over visiting, and my husband was late getting home from work. After putting my 19 month-old son to bed, I felt a terrible pain across my midsection.

I had experienced labor before. This was different. I excused myself for a minute and went upstairs to hang my belly, while I stretched my body over a yoga ball.

It felt as though someone had tied a searing hot belt around the bottom section of my ribs, and kept pulling it tighter and tighter.

Was I mistaken? Was I in labor?

My husband soon arrived home from work and raced upstairs. Our friends were alarmed at this point, as I had been upstairs for a while. We both agreed that I needed to go to labor and delivery, just to be sure. Our friends agreed to stay, while our 19 month-old son slept in his bed.

Once arriving at L & D, there was a flurry of activity. Every nurse I encountered insisted I was in labour.  But I knew that I wasn’t. The pain was unbearable, but located much higher than labour pains.

I was examined, and like I had predicted, I wasn’t in labor. That’s when it happened…

After assessing my symptoms, now knowing I wasn’t in labor, I was diagnosed with the Norwalk virus, also accurately know as the winter vomiting virus.

I was admitted for the night, given an IV for dehydration and anti-nauseants for the vomiting. Mike said goodbye and headed home to relieve our babysitters and care for our son.

“At least the worst is over,” I foolishly thought to myself as I began to drift off to sleep.

Suddenly a nurse, who had an urgent look on her face, woke me saying, “your husband has been trying to call you, but I guess you don’t have any cellular reception in here. So he called the hospital.”

I was wide-awake now. What was wrong?

“Your son, he’s sick, too. So bad in fact that your husband took him to a different (nearby) hospital.”

What was I supposed to do with this information? I felt helpless. I wanted nothing more than to hold my baby. I was finally able to reach my husband, and he filled me in that our son had also been violently ill. He was given medication and sent home from the ER.

As soon as the sun came up, I convinced the doctor on call to discharge me. I had a family member pick me up, and raced home.

Just as I walked in the door, and could see that although there was a path of destruction from the night before, that I had missed the worst with my son, and that’s when my husband fell ill.

I had to kick back into mom-mode and take over with my sick child, while my husband went down the all-too-familiar Norwalk virus from hell journey.

After a day-or-so, each of us bounced back. But the Norwalk virus took a lot out of each of us.

Three weeks later and over the Norwalk virus, I was 39 weeks pregnant. Those same friends were over visiting and although I had sore hips and some cramping, I made it very clear that after being so sick, I needed that final week before our daughter arrived.

Our daughter was born before 10 A.M. the next morning. It was a nice thought though. 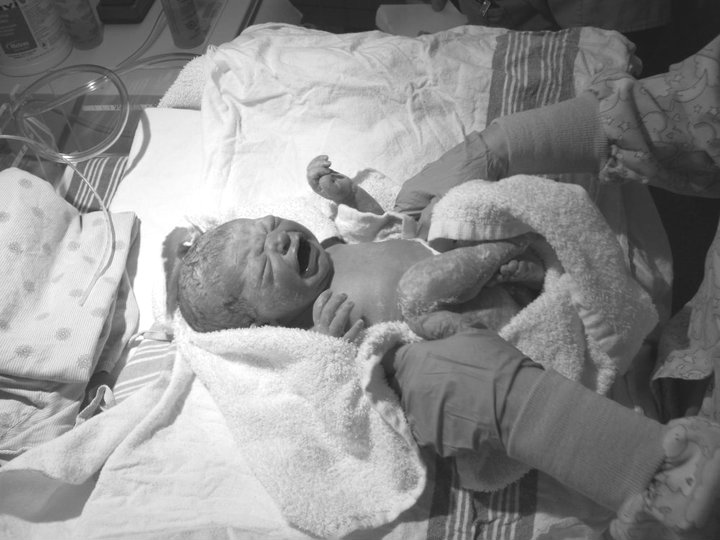 RELATED: Hand, Foot, and Mouth Disease - The Illness from HELL