Hand, Foot and Mouth Disease: The Illness From HELL 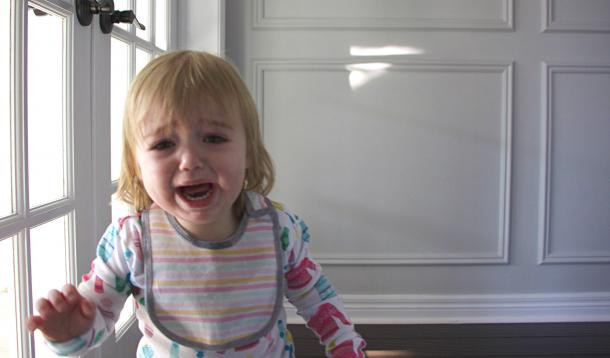 I stared at my inbox, and my heart sank. The ominous “confirmed cases” email from my kids’ daycare. I froze for a minute before clicking. We had just finished having the stomach flu from hell. All six of us had it. I couldn’t handle another wave of illness hitting our family.

I finally brought myself to open the email and in it, it explained that there had been two confirmed cases of Hand, Foot and Mouth Disease (HFM) in their infant room. “Okay,” I told myself, “my twins are in the toddler room, I may have a chance of dodging this bullet.” But something in me knew that we had a bullseye on our backs.

After a couple of days of irritability and wincing when trying to drink, Everly, one of my 18 month-old twins, spiked a fever. This is typically the first sign of HFM. “No, no, it’s happening!” My husband and I said to each other.

That night was spent awake trying to console Everly while she screamed. We tried everything, from Advil to cuddles. By the morning we were wrecked. I continued on with my day, dropping my other three kids off at school and daycare, while keeping Everly home. But the misery continued. She would cry whenever she tried to eat or drink, and would only be content when she sat in her highchair colouring.

By that night the wailing began again, coupled by some diarrhea and vomiting. We were baffled because she didn’t have any of the trademark HFM blisters on her body. Were we misdiagnosing her? Could she be in some other kind of distress? I finally packed her up and headed to the Emergency room.

After a thorough check by the doctor and some doubtful looks from the nurses, I insisted that she search Everly’s mouth for clues. Sure enough, blisters were sprinkled across the roof of her mouth and down her throat. Ouch! What could we do for her? Nothing, other than to keep giving her painkillers, offer cold drinks and popsicles, and wait it out.

After a couple of days, Everly had turned the corner. In fact, both of my girls were happily back in daycare. I tried to ignore the sign indicating the ever-growing count of children infected. 13 confirmed cases. 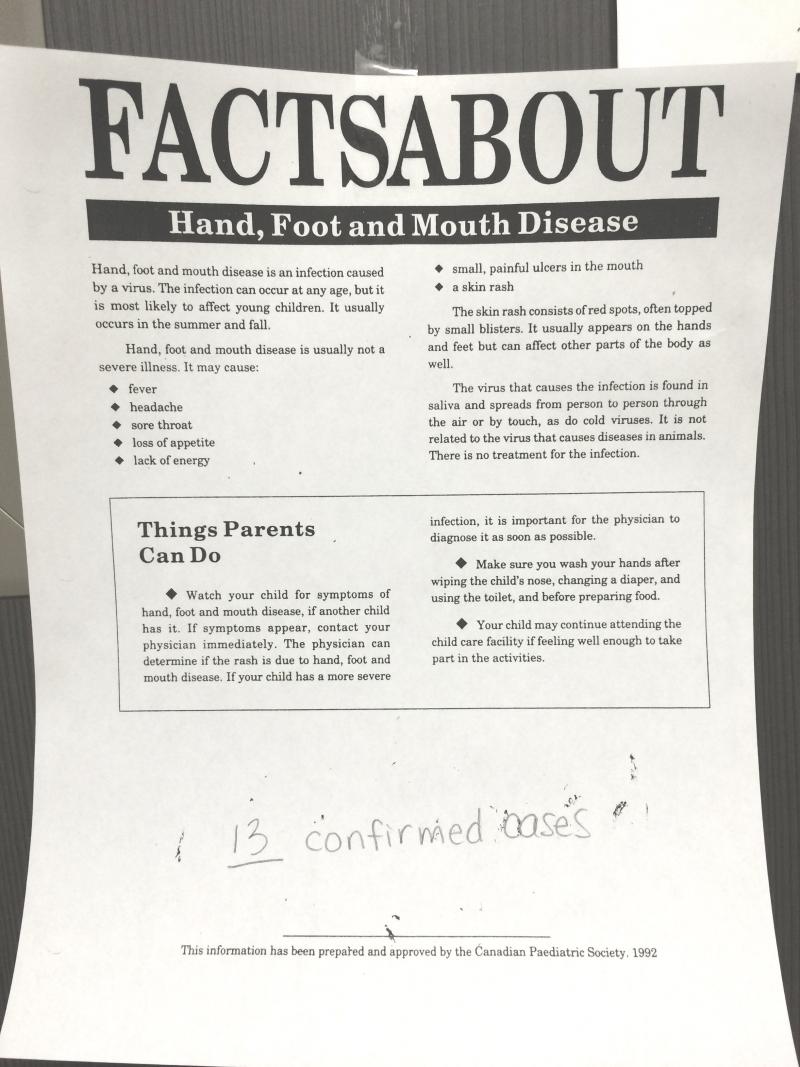 That Friday night, I listened over the baby monitor, as Everly’s twin, Mia, would randomly cry and then go back to sleep. This was not like her. Mia is one of those mystical babies (and now toddler) who LOVES her sleep.

As I waited for the thermometer to process while I pressed it into Mia’s ear that morning, my husband and I exchanged desperate looks with each other. Beep… 39.1 degrees Celsius.  Sh*t! 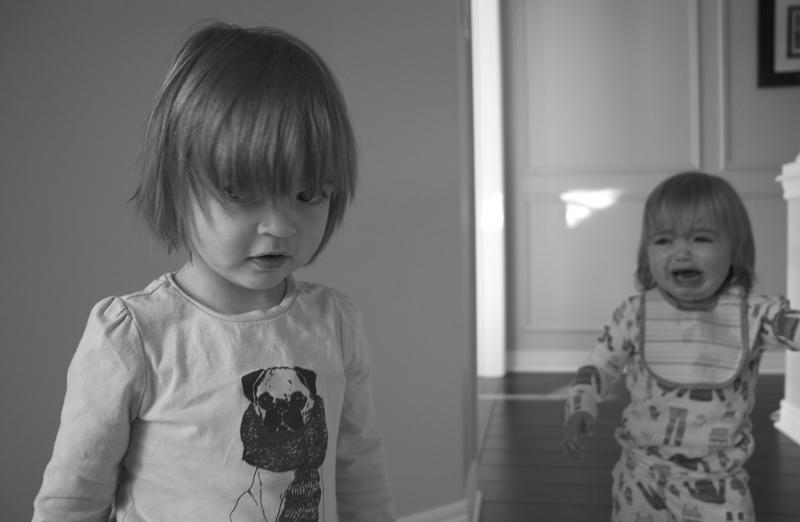 Mia’s HFM experience was a little different and much worse (if you can believe it), than Everly’s. Mia skin exploded the next day with the kind of horrifying HFM blisters you would find on Google. Her mouth was surrounded, and her hands, arms, torso, feet, thighs and bum were covered. 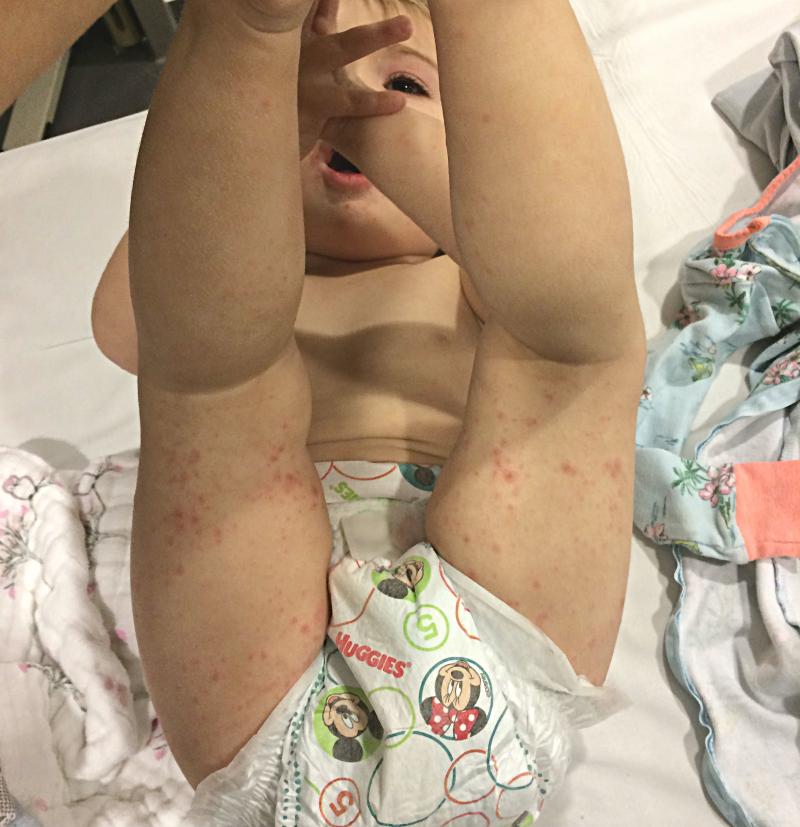 I spent the next three days carrying Mia everywhere, because that was all she wanted. She beat her sister out in the crying category, both by quantity and volume. But the biggest stress was that Mia decided to stop drinking all together. It was too painful. After over 10 hours passing of Mia not drinking, we started to plan another trip to the Emergency room.

Just before leaving, Mia started drinking again. I still took her as a precaution, but while waiting for the doctor she gobbled up a bagel and drank a lot of water. After the doctor examined Mia and confirmed that she was on the other side, and not dehydrated anymore, he suggested putting Calamine lotion on her rash as well as giving her Advil.

Dabbing the Calamine lotion on Mia’s skin gave her the much-needed relief that she needed. She stretched out and lay still, as I dabbed on the lotion.

Both girls are now back in their daycare. Mia’s rash is dry, but she is loving life again and SLEEPING. Despite the daycare's best efforts of sterilizing, the HFM count is up to 18. That only includes the kids in the daycare. If you were to tally up the siblings, parents and staff that caught HFM, it has been estimated to be around 40 people.

I sterilized our home from top to bottom yesterday, and we are praying that our family is clear.

So, as far as the variety of illnesses our family has had the pleasure to experience over the last six years with kids, I would have to say that HFM has been the worst… dare I say, biblical.

Note: Hand, Foot and Mouth Disease can vary in severity. I have asked some adults who have experienced HFM to articulate exactly what I feels like. Here’s what they have to say:

“It feels like a burning sensation on your hands and feet; I couldn’t walk, and if I did I had to crawl on my hands and knees.”

“As the blisters begin to heal, there is a constant pins-and-needles sensation. Adding pressure like a blanket, or wearing gloves helped. The rash eventually becomes very itchy.”

“My toenails fell off.”

“My throat hurt so much (because blisters were in my mouth and down my throat) I was prescribed codeine.”

“This is the worst illness I have ever had.”

Here is a photo of my friend's husband's hands. Out kids go to the same daycare, and he was hit HARD: 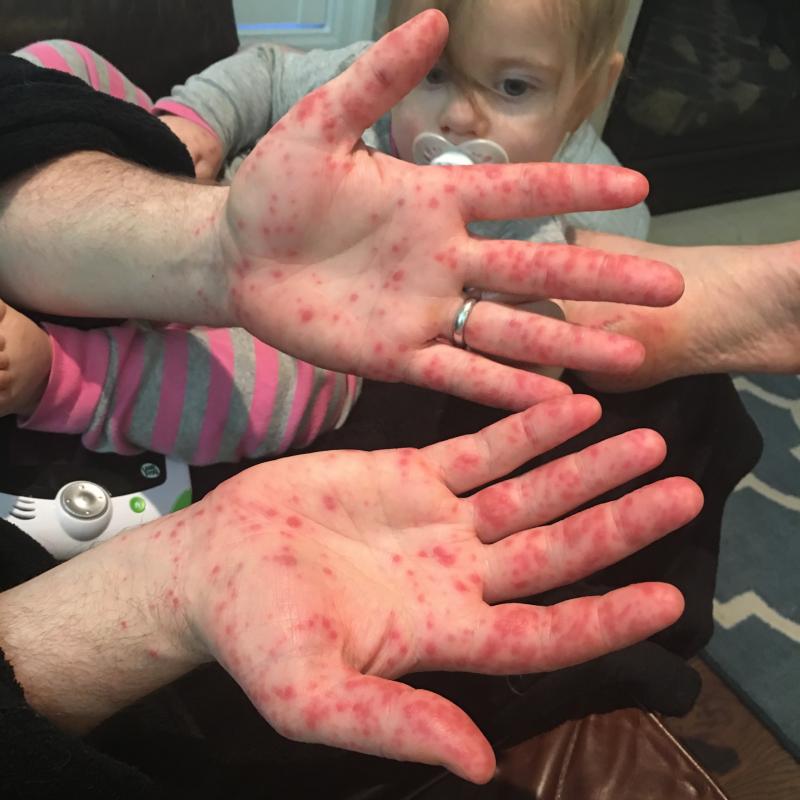 Here are some remedies you can try for HMF:

RELATED: The Perfect Number of Children - Plus Two