Will You Watch "The Interview?"

Are Rogan and Franco able to pull it off? 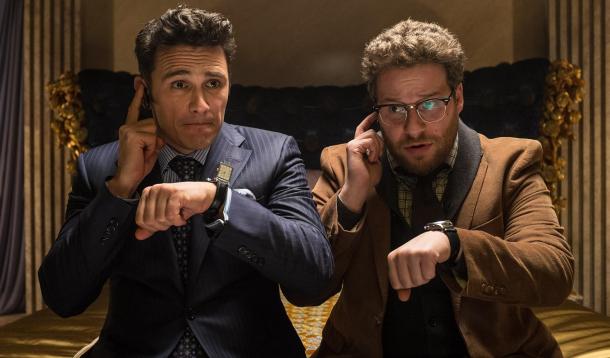 After much swearing, debate, and attempts to remember our Google passwords, my husband and I successfully rented The Interview - the movie North Korea (allegedly) didn’t want any of us to see.

So far, two days past our rental, our internet (and personal freedoms) are still intact.

I was going to see it anyway. I have a great, big soft spot for Seth Rogen (not so much for Squinty Franco but he’s not hurting anything, I guess) and that wonderful Rogen laugh that simply carries mirth upon it, whether anything else is funny or not.

This Is A Seth Rogen Movie You Definitely Want to Rent

The whole mess with the theatrical release not happening, of course, made me want to see it all the more (didn’t that work on you?) and it was interesting to imagine this could be the new release movie of the future, streamed directly into my living room where I could watch in my PJs and gnaw on leftover gingerbread.

But - and I am paraphrasing The Grinch here - Movie theatres "will always be, just as long as we have we." The group experience, the loud talkers, “I know what’s going to happen” guys and sticky floors all mixed in with about 100 people laughing (or crying) at the same thing, at the same time, is part of the joy of seeing movies.

When viewed in the sterility of my own living room, I find that most comedies, no matter how great, end up with the air let out of them a little. Not that The Interview has a ton of air to start with.

Centred around Franco’s faux-journalist TV host (he makes a passable “bad” entertainment news host, but no danger of mistaking him for a real journalist, even of the "puff piece" variety) who lands the interview of a lifetime because North Korea’s Supreme Leader is a huge fan. Nearly the entire film is the lead-up to the actual interview. I enjoyed a few J-school and journalism jokes but I don’t know if they’re as funny to people who haven’t worked in a newsroom.

Don't Say We Didn't Warn You: The Most Addictive Popcorn You Will Ever Eat

It’s a fish-out-of-water/incompetents on the loose type of comedy that follows the basic formula. When did our action-comedy heroes become so tepid? Is it truly only funny when the only way our protagonists can succeed is in spite of themselves?

There were a couple of very funny lines, a handful of funny scenes, and a lot of not-so-subtle gay jokes. Boobs are in there, even in North Korea. And cartoonish, improbable violence. There’s a fair amount of Vancouver & area standing in for the world’s most dangerous nation. The portrayal of Kim Jong Un is not nearly as vicious and goofy as the puppet portrayal of his late father, Kim Jong Il, in Team America (which is also a lot funnier overall).

There was even an attempt to illustrate some of the known atrocities from the country - not funny, but at least Rogen, Sterling & Goldberg didn’t completely skirt the issues, and quite a bit of the comedy is derived from the Ugly American stereotype, and not at the expense of the North Korean people.

At the movie’s end, hubs was just about asleep, and all I thought was: it’s just a movie.

If you want to check it out yourself, for $6.99, it streams in Canada via YouTube. You'll need a Google account to rent or purchase it, and possibly an A/V guy to get it on your TV. Unless you're better at things than me, which you probably are.