To get you — and the kids — in the mood to return 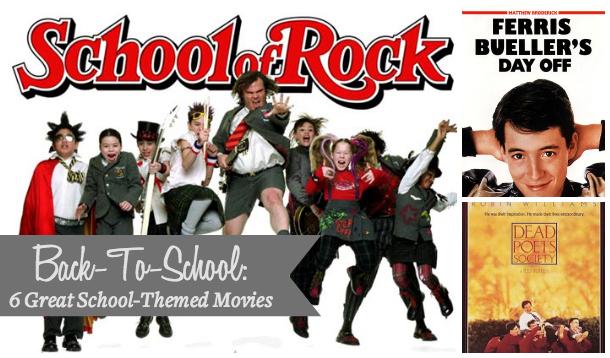 While most parents can’t wait to get the kids out the door in September (until you remember you have to pack lunches…300 days of lunches!), the kids’ reactions can vary. I’ve got one school enthusiast and one who can be charitably described as indifferent.

Here are 6 school movies to suit your BTS mood: 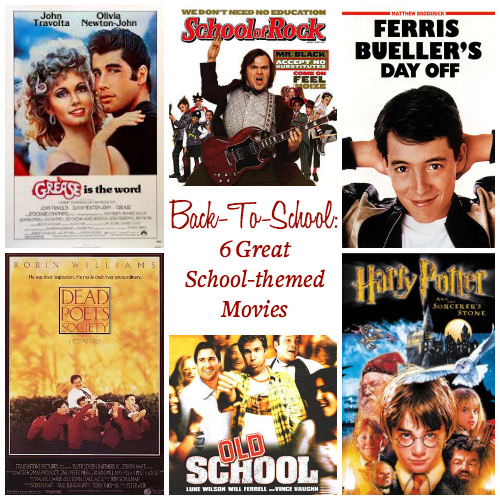 What’s better than finding the right group to hang with who really gets you? Plus, “Beauty School Drop Out” carries the very important message of staying in school, as sung by Frankie Avalon. And don’t forget a totally bitchin’ makeover for Sandy! It’s what I thought high school would be like, until I actually got there.

Rated PG-13; some suggestive language that I didn’t really figure out until I was a grown-up.

Oh Captain, My Captain! This one has messages about being your own person, going against the grain, PLUS super-adorable students (Robert Sean Leonard, Josh Charles, and some guy named Ethan Hawke) driven to make a difference in their own lives by their English teacher, played to perfection by the one and only Robin Williams.

Jack Black’s cash-starved musician accidentally cons his way into teaching prep school kids, creating an adorable, pint-sized rock band in the process. Some legit rock n’ roll education and some lessons about taking a chance round out the plot. Warning: heavy on the Jack Black—this is a contentious issue in some (at least my) households.

Rated PG-13, but most of the rude stuff and drug references should be over little viewers’ heads.

Harry and his friends go to Hogwarts School of Witchcraft and Wizardry, which is 100 per cent cooler than anywhere any of us went to school. But as our young wizards get older, the secrets and dangers of Hogwarts get bigger. Harry Potter and the Sorcerer’s Stone is the most friendly for those with younger viewers.

Rated PG. Later outings in Harry’s adventure are PG-13. There are EIGHT films in the Harry canon—plan a marathon or screen one a week to get you through family movie night until Thanksgiving.

The most epic day of skipping school ever committed to film, which inspired a deep desire to visit Chicago (and when I finally did, doing nothing except pointing out Ferris Bueller locations was a real hit with my group). Matthew Broderick invests Ferris with such effortless charisma, you are drawn helplessly along for the ride, just like his best friend, the tightly-wound Cameron.

This one’s more for when the lunches are made and the kids are tucked in. Grown men try to recapture the glory days of college by starting a fraternity, only to face the same situations they did at college the first time, but with much less hair and rebound capacity after a night with a keg. Best-known for Will Ferrell’s streaking scene, you won’t have to study hard to enjoy it.

Rated R; teens might enjoy it, but there is the disturbing theme of adults…having fun…without their children.

Didn't get past the part about school lunches? You might like this: "How to Pack a Healthy Lunch Your Kids Will Love."