Road Trip Win: 5 Great Listens When You Travel with Kids 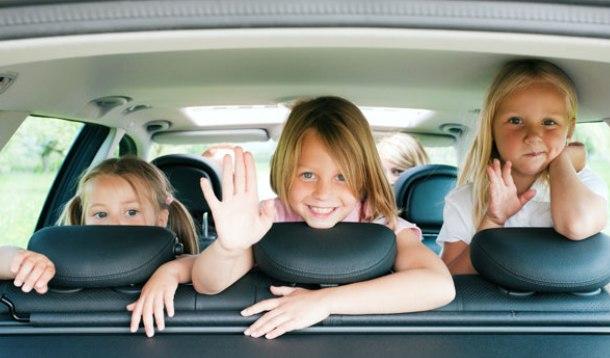 Around this time every year for a decade, my husband and I would throw our kids into the back of the car and commence the 18 hour drive to my parents' timeshare in South Carolina. For us, the actual road trip was as much a part of the vacation as was the destination, so we'd look for ways to make it enjoyable and memorable...and for ways to keep the kids entertained in those bygone days before laptops, iPads, and personal DVD players.

My kids were never big on "children's music" (thanks in no small part to the fact that we didn't actually play children's music for them on these road trips), but they were normal kids, and would often ask to hear their favourite song played over, and over, and over again. You really haven't road tripped through the Blue Ridge Mountains of West Virginia until you've road tripped listening to the "O Brother, Where Art Thou?" soundtrack on repeat. Or driven the entire states of North and South Carolina listening to nothing but Dixie Chicks.

Eventually we moved beyond music and found ways to entertain an entire carload of family members with stories.

I have some friends who insist that their ears start to bleed as soon as they hear that slow drawl of Stuart McLean's on his Vinyl Cafe, but "Dave and Morley" stories are entertaining and accessible to everyone from pensioners to kindergardeners. We didn't think my eldest son was actually listening to them on an early trip until he asked us what size his jock was after we'd played The Jock Strap.

16 Books You Need On Your Nightstand Right Now

Any NPR fan will know all about audible.com, and their free trial policy is da bomb. Consider "Eleanor & Park" if you're traveling with tweens, or for younger kids, how about Roald Dahl's Matilda read by Kate Winslet? The entire family will enjoy Anne Hathaway reading "The Wonderful World of Oz", or for a longer trip start the Harry Potter series and see how far you get.

Are you feeling guilty about pulling the kids out of class to get a head start on your road trip? You won't if you spend that time listening to Stuff You Missed in History Class. Learn about everything from the Salem witch trials to Chinese foot binding...find a topic that relates to your destination for bonus marks!

Once my kids got a little older, they started to enjoy This American Life podcasts as much as my husband and I do. The American public radio show picks a different theme each week. Some weeks will incorporate fiction, journalism or entertainment. It's mostly true stories of everyday people, and the show is good about warning up front if the topic's not suitable for all listeners. Teenagers and parents alike enjoyed the podcast on Middle School...and we all learned a little from that one.

Make your kid a fan of fiction with this strategy to pass the time.

Last year This American Life spawned Serial, the hottest podcast of 2014. The twelve episodes are now complete, but if you missed it, start from the start to follow the story of Adnan Syed, a Baltimore teen convicted of the murder of his ex-girlfriend in 1999. This one's suitable for mature teenagers.

The other day in the car, my hip hop lovin’ teen reached for the radio controls as the Dixie Chicks started to sing “Landslide.” Miffed, I screeched at him not to turn the station, and instead he smiled and turned the song up. “This reminds me of our road trip to South Carolina,” he said. Come to think of it, those soundtracks were pretty sweet.