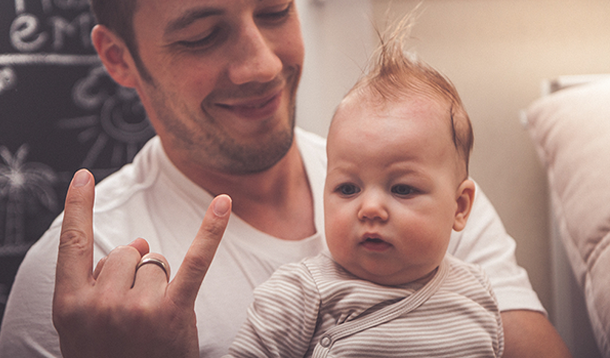 Finding a suitable name for your baby can be an overwhelming task, and one that may come in second only to "push human infant from soft parts" in the pain factor. Everyone wants to weigh in, and you may even have pressure from family members to choose a traditional family favourite, like Ralph or Bumstead. (Sorry; NOPE.)

Instead, why not start your new baby out with some edge? There are no pablum-flavoured names here in this list.

How about some good old fashioned kick-ass rock inspired baby names for the new addition to your family? Whether taken from a song lyric or after the musician themselves, these names are sure to set your kids apart in a room full of Aidans and Avas.

No matter your baby's given name, follow standard naming protocol when it comes to assigning a moniker: Make sure it's something you feel comfortable shouting through a crowded space at a surly teenager.

The list isn't divided along gender lines because rock 'n roll is about defying convention. Rock on!

Is there a stronger name than this? Only "Meathead McIron Shoulders" sounds stronger in my book. This name evokes a rock history starting with Angus Young, the quintessential rock guitarist and co-founder of AC/DC.

From The Police song of the same name, this ballad to a sex worker...wait. Maybe move along, now.

Lola is at once both soft and feminine and also hard-core. Lola is the prettiest girl in school who also secretly practices martial arts and has her fourth degree black belt. She smells like Noxema and Love's Baby Soft, but could rip your goddamn head off if you grab her ass in the hallway. Good on ya, Lola.

Any child name Johnny — not John, not Jonathan, but JOHNNY — is either going to be a rock idol, or wake up in pools of vomit until his roadie friends stage an intervention. So while you're taking your chances with this name, there's still a 50% chance he's going to be a shooting star.

Every single Jimmy I have known in real life will bring a tent to your BBQ party, where he will essentially live shirtless for a week following the festivities. In a word, Jimmy is awesome.

Is there a cooler name? No. Will this child grow up to be a fierce rock 'n roll god? Maybe. Will an "Onyx" eventually start a small church/cult in an abandoned Baltimore factory where they will be worshipped for their vodka and Red Bull induced ramblings? Yes.

As in "shine on you crazy."

Sweet and simple. The one 'L' spelling takes this not uncommon name a tinge off centre, and sets it apart from being too ordinary. It also dooms your child to a life of saying, "No. One L. Only ONE L, like in "like." ONE... Oh fuck it," to every Starbucks barista they ever encounter.

I triple DOG dare you. COME ON; LIVE A LITTLE.

Bowie or Marley - both awesome.

The 1972 album Slider by T.Rex is a definite desert island album list, and deserves to have children named for it. Plus, Rex is short for a dinosaurs name and names ending in 'X' are strong and denote leadership.

Plenty of names come from the cultural arts, like Story, Poem, etc. Clef is unusual but cool, and will likely be the only one in a kindergarten class. And, any child named Clef will grow up to thank his lucky stars his parents weren't math geeks like his buddy "Polygon's" parents.

Mystical and alluring. Rubies are said to be the most precious of all 12 stones in some creation stories, this gemstone makes a fitting name for the beautiful gift of a child. (It's also said that rubies, when dropped into a pot of water, will cause it to boil instantly, so you know, the name is sweet for many reasons.)

Queen is regal and strong and everything you want your child to be. The world should know how awesome they are and this name leaves little to the imagination. Imagine a resume with "Queen" at the top. That's a kid who's getting the job.

Say this one out loud. Isn't it beautiful? It's... what's the word? Lyrical. A great name for a musical family or a child you'll live your musical hopes vicariously through.

RELATED: Is This the Most Ludicrous Baby Name Yet?