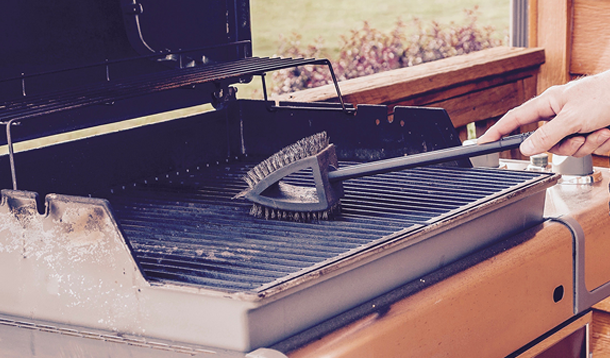 How do you like your steak or burger? Medium rare, well-done, or with a sharp jabby death spike hidden in the centre?

If you are using one of these bristle style BBQ cleaners to clean your grill, BBQ, or smoker, it's a very real possibility your next patio party will wrap up in an operating room, and no wine pairs well with that.

CBC.com reports that Canadian surgeons have long been saying they see too many cases of BBQ brush bristle injuries in emergency rooms every grilling season. The thin wires of the BBQ bristle-style cleaners easily appear almost translucent and all but disappear on a dark grill, making it virtually impossible to detect one should it become attached or embedded in cooking food. From CBC:

Canadian surgeons are urging people to throw out wire-bristled barbecue brushes, because none of them have figured out a surefire way of removing the wires when they get stuck in people's throats.

The thin, sharp wires can come off the brushes, attach to barbecue grills and cling to food without being noticed. If it's swallowed it can cause damage to the throat and epiglottis, which is the flap of cartilage that covers the opening of the windpipe when swallowing.

Canadian surgeons at this year's annual meeting of the Canadian Society of Otolaryngology spent time on this specific issue, and the CBC reports Dr. Ian Dempsey outlining the difficulty in removing the bristles. (Otolaryngology is the field of medicine relating to the head and neck. They are not bird-watchers (that's ornithology) which I was relieved to learn because it seemed strange bird-lovers would be giving BBQ advice since they're supposed to be devoted to the preservation of birds, not the cooking of them.)

Dr. Dempsey says: "None of us have figured out a surefire way to get rid of them, so we'd prefer just to prevent it from happening in the first place. We're hoping that if enough people raise this issue, hopefully we'll just eliminate those types of brushes from the market and use a safer alternative."

The meeting also cited the frequency in which these injuries occur, and many major outlets see several cases per month. Also mentioned are cases where the needles become ingested and become lodged in intestinal walls, which sounds about negative a kabillion on the summer fun to-do chart.

I just bought a new grill brush, and while it does a great job removing residue and charred food, the bulk of its allure was lost after the bit about causing damage to "the flap of cartilage yadda yadda windpipe." NOPE. Turf it.