Olympian Shows Heart of Gold & Sells Silver Medal for This Cause 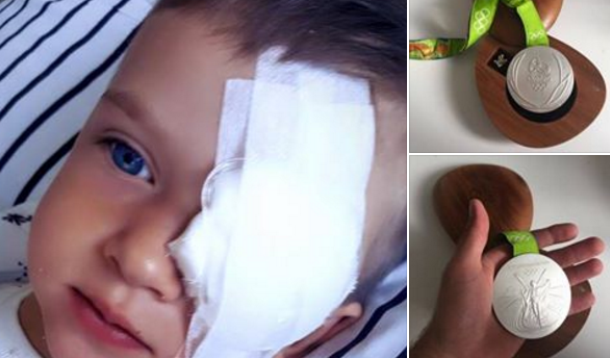 The Rio Olympics may not go down as the best or most thrilling in history, but at least now they don't need to be remembered as "Funky Water shit-a-thon" or as the stage for Ryan Lochte's blatant fibbery about his "robbery," and it's all thanks to a Polish athlete you probably haven't heard of this side of the Atlantic.

Piotr Malachowski has received two Olympic medals, with this year seeing him take home the Silver in Discus. Being a non-athletic type means that the only disc I've thrown was the Titanic soundtrack disc, when I found it in the CD player of my then-boyfriend's truck. (One of two things had to have occurred - he was either seeing another woman, or, you know, he listens to the Titanic soundtrack. Either way, he had to go.) But even without knowing exactly what discus throw is all about, I can understand that it is an incredibly challenging sport, requiring great strength and - like all Olympic endeavours - a serious commitment to your craft. It's probably something that if you won a medal for, you'd at least keep it in your bedroom for a while.

But not Malachowski. He didn't even keep it long enough to use it for it's obvious best uses, like impressing people at pubs and wearing to the supermarket for extra free samples. Instead, he sold it, and not for a new car or kick-ass leather boots or even a bucket-list vacation.

A Polish mother, Goshia Malachowski wrote to congratulate Malachowski, but with a request: Would he be able to help her? She was looking to save the sight and possibly life of her 3-year-old son, Olek, who has a form of cancer known as retinoblastoma, or, in horrible layman's terms, "maybe-gonna-lose-your-eyeball-cancer."

The family has been fundraising but the expensive treatment was still beyond their reach. From Upworthy:

"Though the disease is treatable, Goshia wrote to Malachowski that the only way to save her son's eyesight was to take him to New York City for treatment by a top ophthalmologist. Needless to say, that would be far too expensive for her family to afford on its own."

The athlete (and all-around amazing guy, it seems) offered up his medal for auction, and through Facebook promotion and the wonders of social media and most people not being assholes, was able to secure the remainder of funding for the family to travel to the U.S. for treatment.

So while some athletes were busy vandalizing gas station bathrooms, strengthening incorrect racial stereotypes, and lying to authorities, this athlete deserves accolades for not only a winning physical performance, but a kind and generous one as well.