I don't give a f*ck if I have to move, I WILL WIN this fight 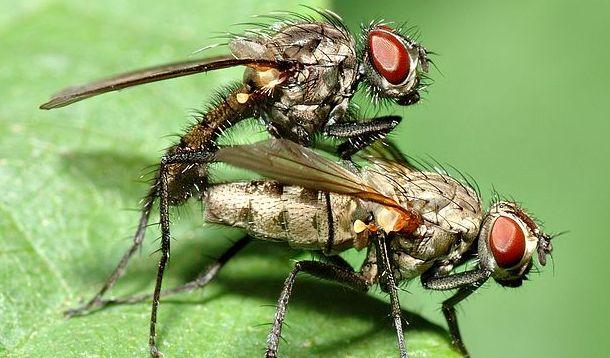 I have spent the last three days engaged in a battle which has left me limp and broken.

My house has not seen the remains of war like this since the great "Shit, the Internet is Down" meltdown of ’13. It’s bad here, but I am hell-bent on winning. My enemy is a worthy opponent; small but steady. I’m taking them down quickly, but they have the advantage of a rapid reproductive system whereas I have two kids, a broken dishwasher, and I am tired.

Fruit flies. Swarms of them.

We Canadians love our summers and it's no wonder. We wait patiently through months and months of snow and ice until finally, one day, the smell of thawing dog shit fills the air and we smile, knowing warmer weather is upon us. Snow gives way to blossoms, which gives way to delicious seasonal fruit that will fill long vacant bowls on kitchen tables across the land. And with the bountiful harvest come the scourge of a nation: Drosophila Melanogaster, the common fruit fly. Sounds like someone in Voldemort's army of darkness.

At first I was catching them with the vacuum. They clustered outside of my food cupboard like desperate teenage club-goers bribing the bouncer, so I thought they were an easy target. I snuck up on them, stealth-like, and did manage to catch a few. But flies fly, so they move quicker than an 17-year-old girl when someone says, “Hey! Have you seen the pictures of Justin Bieber nude on Hawaiian beach?”

Then I tried the red wine in a glass thing but forgot to put a funnel in the glass so the flies couldn’t get out after they drank. Now I just have intoxicated fruit flies leaving purple vomit spots all over my kitchen. Since their life cycle is only 24 hours, by 2pm my kitchen was full of drunken teenage flies fornicating on my good plates. It’s crazy here, like a Cancun-are Senor Frogs in mid-February. Someone started a wet T-shirt contest and I slipped on a puddle and hit my head on the counter.

Just before I blacked out, I heard them giggling and talking about putting my bra in the freezer.

I get invaded by fruit flies every year. I'm not sure why they seem to target me specifically, but they do and I now I have to deal with it. I don't like to think too hard about where they come from, and all I know is that they weren't here before the fruit came in so clearly they came in on the fruit. While I almost always wash the fruit before I eat it, sometim...oh sweet Jesus. I'm eating larvae, aren't I?

The fruit fly issue isn't an isolated one. It's a long, drawn out annual battle of wits and power and I am NOT GOING TO LOSE THIS YEAR. I've tried all the Pinterest tricks, from the paper funnel in sugar water (my son drank it and used the cone as a spit-ball cannon), to the small glass of "decoy" wine (made the flies drunk and copulate more aggressively) to stern lectures (they have incredibly short attention spans for something with such a short life cycle).

Fruit flies aren't exciting bugs like lice or centipedes. At least with those creatures you get a nod of sympathy from the pharmacist or the fireman you called to destroy them. With fruit flies all you get is a "This is not an appropriate 911 emergency call."  But those people - those people - they don't quite understand what you're dealing with. This is SERIOUS BUSINESS.

Here's my updated strategy for Summer 2016 to eradicate these flying assholes while maintaining my sanity:

1. Show These Fruit Flies Who's Boss

I'll stop eating fruit. This may be harsh, but I am sick of having tiny brown bugs cover every inch of counter-top real estate. I may lose out on vitamins and fiber, but a little bit of scurvy and some constipation never killed anyone. I am an adult and sometimes adults need to make tough decisions, like opting for no balanced nutrition.

2. Remove All Food from the Home

Failing the above, I will remove all food and foodstuffs from the home. We will eat entirely at restaurants, taking no meal inside the confines of our home but rather only accepting food handed to us in our car through sliding windows. I don't care if it takes until October; I will dine out every single meal until the fruit flies understand I am not fooling around.

Desperate times often call for cans of aerosol poison and drunken phone calls to realtors. If things persist beyond a reasonable amount of time, we'll probably need to move.