Zap those "in the crack" spaces on your patio or walkways 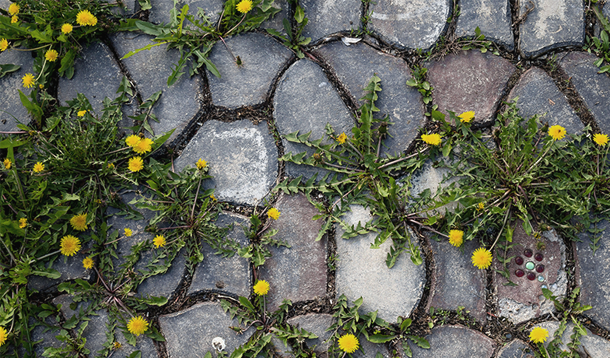 The snow has finally melted! We are saved! Spring hath not forsaken us, having kicked winter in the soft baby making part. The warmer weather and sunshine is bringing everything back to life, including weeds. Okay, maybe the snow wasn't so bad after all because it's only been warm for three days and somehow my patio and gardens are full of hard to control weeds already.

It's time to arm yourself. I don't like spraying chemicals where my kids and dog play, and enjoying a BBQ'd hamburger next to a chemical dumping ground isn't high on my summer to-do list, either. Most counties have banned hardcore pesticide weaponry from residential use anyway, and since my two tomato plants don't qualify as "agricultural farming" (I tried) I'm stuck either plucking weeds or living with them. Trying to convince myself they were decorative lawn cover didn't work.

A friend's mom told me about her magical safe weed control formula and while the cynical side of me was all "you crazy, lady," the other, kinder-to-friends'-moms part of me thought I'd give it a try and woo hoo because it WORKS.

Behold, patio weeds; or, as referred to by its proper botanical name "The Devil's Pubic Hair": 10 seconds after 24 hours after spray, it's plucked out and GONE.

Combine until salt is dissolved. You can use right away but letting formula "brew" in a sunny spot to infuse with lemon is even better.

While not technically "poison," you'd be ill-advised to put this stuff near your eating or peeing places. Or your eyes, or a cut on broken skin. You know what? Just be careful, okay? This shizz is acid, pure and simple and that's gonna sting, whether you're a dandelion or not.

You can easily increase the amounts to double or triple recipe. I mixed in a glass bowl and then poured into a new spray trigger bottle on stream setting so I could blast them (it's cathartic; trust me) but I also set my older kids to work with an old paintbrush to dip and "paint" the cracks of our walkway. Leave the lemon halves in the liquid as long as possible, removing only if they don't allow you to squirt the liquid easily. It's the oils you want from the lemon, so the longer they can stay in the better.

Bonus: your backyard is going to smell like a Salt and Vinegar chips factory and there's not one single drawback I can imagine to that scenario.

Just be careful of overspray on plants you want to hang around - this stuff is potent and non-selective — and, just like Tequila, it won't care who it causes to dance on an all-inclusive resort bar topless, errr...I mean, eradicate.

RELATED: Super Six: Why You'll Want to Eat These 6 Nutrients During Your Pregnancy