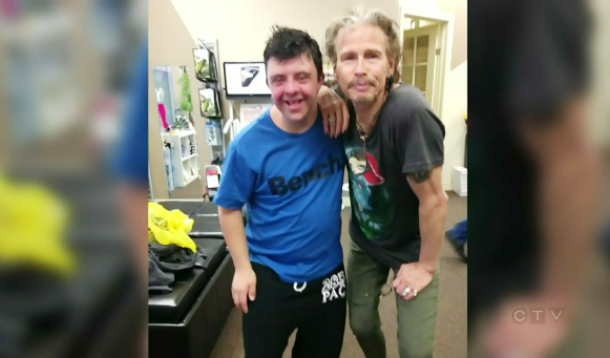 There's an old adage advising you to never meet your heroes. The reason they say that is because quite often your heroes turn out to be complete assholes.

And then where does that leave you? I'll tell you: It leaves you in the parking lot of an abandoned tire factory burning entire CD collections and boxes of novels.

It's a good thing that Anthony Yorfido didn't heed this piece of advice last week, because he would've missed out on a chance of a lifetime opportunity to meet his hero Steven Tyler, of the Aerosmith variety, henceforth to be referred to as Mr. Awesome-in-tight-pants.

Anthony has been a huge fan of Steven Tyler for many years but was unable to get tickets to the rocker's sold out show at nearby Fallsview casino in Niagara Falls. The Welland man – who has Down syndrome – was simply visiting a health supply store with his mother Diane on the fateful day. Anthony says he first noticed a "big big big big big limo" pull up to the store, and then in walked Steven Tyler. After a few moments Anthony gathered himself and made an introduction to the singer. When Tyler asked if he would be at his show that evening Anthony said he was not able to attend because he could not secure a ticket before they sold out.

Well Steven Tyler would have none of this bullshit, no sir. He said he was going to "make it happen,"  and promptly invited Anthony to that evening's show, complete with a backstage pass, thus securing for himself Ultimate Superstar Status for eternity.

Plenty of celebrities would go that far - there are many kind souls out there, even in Hollywoodland. But hold on. Shit is about to get all CRAY-ZEE up in here now with the surprise Tyler had in store for his superfan:

Yep; that's Anthony rocking it out on the maracas to Sweet Emotion, basically living out my Grade 11 fantasy dream life.

What makes this even better is that chance meeting between the two was totally genuine, totally organic, and totally serendipitous. There was no PR efforts, no contacting the Ellen Show or Facebook campaign. It was - and is, as we can see - simply a dream come true.

Jeni Marinucci: Panic Button Years How to Get Your Sh*t Together