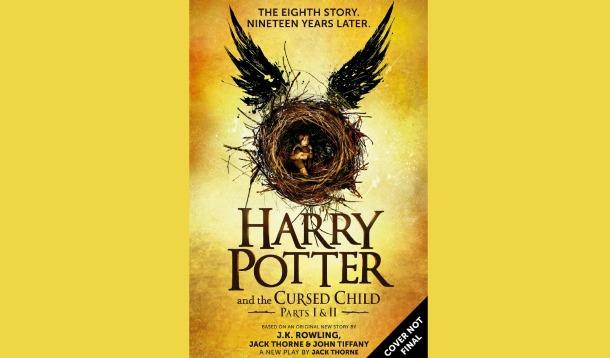 Have you made plans this summer? Rented a cottage? Booked an RV for a cross-country tour? CANCEL. Call right now and get that security deposit back because you'll want to spend a few warm days lounging around reading the brand new Harry Potter book coming July 31, 2016.

We knew a play was coming — a play based on an original and unreleased script — but the play opens in London England and I don't fly and I'm sorta poor so I can't attend. Also I wasn't invited.

But now I can read the tale and you all can as well, because immediately following the first show in July of this year the script will be released as Book # 8 in the Harry Potter series as Harry Potter and the Cursed Child Parts I & II. From Pottermore.com: "Print and digital editions will publish simultaneously after the play’s world premiere this summer, and will comprise of the version of the play script at the time of the play’s preview performances."

Let's look at this with a critical mindset. Wait! I'm freaking out! I can't be critical! It's a new Harry Potter story and it's about Harry's kids! Maybe one of them slashes Draco's tires and puts farting potion in his briefcase! Plus, look at the "Parts I & II" of the title. Is this a clue? Are there more parts coming? Why even reference this aspect if not? No one called the first Godfather "Part One" until after Part Two. The First World War? "The Great War" until we had another one! I'm happy enough we're getting a new installment at all but if anyone has pull with Rowling, I think it'd be great to make this an annual thing. I have no other plans.

Scholastic Canada will publish the book here in Canada and offers this glimpse at the storyline:

It was always difficult being Harry Potter and it isn’t much easier now that he is an overworked employee of the Ministry of Magic, a husband, and father of three school-age children. While Harry grapples with a past that refuses to stay where it belongs, his youngest son Albus must struggle with the weight of a family legacy he never wanted. As past and present fuse ominously, both father and son learn the uncomfortable truth: sometimes darkness comes from unexpected places.

Pottermore says the new book picks up "19 years after the Battle of Hogwarts, in the epilogue to Harry Potter and the Deathly Hallows" and will be "staged in two parts, due to the ‘epic nature of the story’."

Epic? EPIC? How about "my-kids-are-gonna-crap-their-pants-and-okay-so-am-I?

I need to go cancel a campground reservation since my end-of-July plans now include standing in line at a bookstore and peeing in a paper cup because I am not losing my spot.