It's her coat of many colours and it's here! 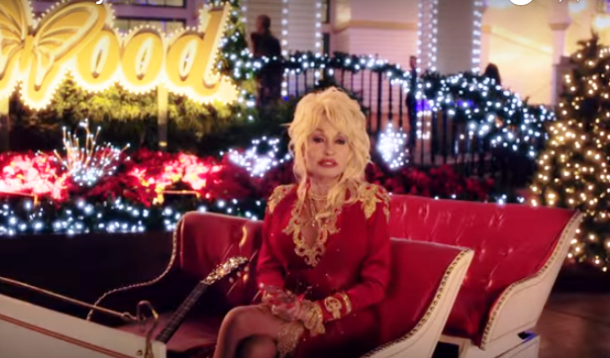 December 2015 may very well be remembered as a time of darkness - political candidates spewing hatred and vitriol, unexplainable violent acts, and Justin Bieber's new album at the top of the charts. Who can bring us hope? Who can take the pain away, if only for a few hours?

Dolly - or a reasonable facsimile of - is here to take our woes away, this Thursday at 8pm on NBC. (That's a "station" on "television" for the Netflix and Apple TV faithful. Call your local "cable company" if you want to watch the show on a "television set." Otherwise, stream it or view through a neighbours window, but whatever you do, watch this movie.

"Dolly Parton's Coat of Many Colors" is based on the inspiring true story of living legend Dolly Parton's remarkable upbringing. This once-in-a-lifetime movie special takes place inside the tight-knit Parton family as they struggle to overcome devastating tragedy and discover the healing power of love, faith and a raggedy patchwork coat that helped make Parton who she is today."

The movie recounts Dolly's 9th year and circumstances that led to her famous song/story "coat of many colours." I'm not a religious person, but the message is a good one regardless and the production has Dolly's seal of approval and input as one of the producers. The story has roots in the circumstances surrounding the death of Dolly's brother Larry, who was only four days old when he died. Larry was to be "Dolly's baby,' as the large Parton family paired siblings to each other to help out when extra hands were needed.

This family had nearly nothing except for one another (her mother once literally sewed Dolly's foot back together after an injury, I read in her autobiography. Ask for this book for Christmas and you will never bitch about having "less than" again). Although her beginnings stem from being quite literally born into a dirt floor shack, here is a woman who has started countless charities, shown exceptional grace under fire, and been kinder than a saint to many who did not deserve it. (Check out the Dolly Parton episode of Drunk History for evidence of her innate goodness. It's worth the $2.99 on iTunes.)

What is it about Parton that people love so much? It goes beyond the fact that she has the voice of an angel. Is it her progressive and liberal attitude wrapped up in a skin-tight bedazzled, hair-sprayed package? I've never met Parton but I will bet you $100 that she smells like Pine Sol, new shoes, and sugar cookies. I would spray my house with that, Febreze people. Get on it.

I'll be watching "Coat of Many Colours" on Thursday night because not only because the movie promises to be a glimmer of light in a foggy time, but because my "good feels" tank is running low and I need a Dolly fix.