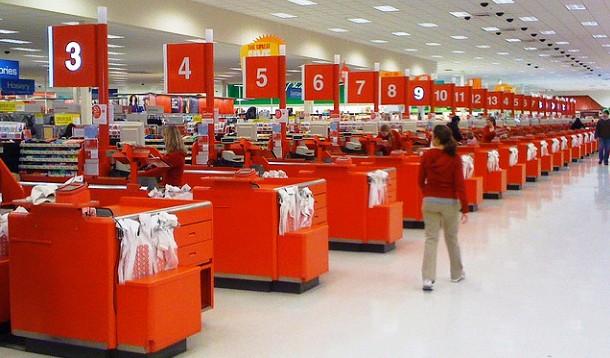 The retailing giant Target has been gone from Canada for almost a year - the signs have been removed, the last returns long settled, and vast expanses of malls now sit empty and unused. But do we miss them? Would we welcome Target back with open arms like a boyfriend we weren't really "so omg over already?" Just like with an old love, while we may miss wearing their sweaters, we need to ask if that alone is worth the bullshit parts of the relationship. (In this case: high shipping costs, fewer choices in selection than American market, long wait times.) You better ponder that quickly, because Target is back - sort of. Target announced this week that they will now ship to Canada, allowing all Canadians - not just those within border trip driving distance - to get their hands on cheap toilet paper and durable children's clothing.

But I don't know that I'll be so quick to forgive. We were jilted, Canada. Target left us in the middle of the night after some great - albeit short - foreplay, with no hint as to a pending break-up. We were looking for condoms when it packed its bags and stole away. It was here one day and pretty much gone the next, no longer answering our calls. IT BROKE UP WITH US ON A POST-IT.

And now it wants us back. Target will ship to Canada, but it's not without strings attached. The CBC reports that some commenters from online discussions are not so pleased with the chain, noting would-be shoppers discussing exorbitantly high shipping costs:

"I just looked and the pricing is absurd," wrote one disgruntled shopper on an online discussion thread titled, "OMG — Target shipping to Canada!"

"I was super excited about this yesterday," posted another shopper. But that excitement quickly died down when the person apparently tried to buy something on the Canadian Target site: "My $30 purchase was almost $70 with shipping and duty. Absolutely ridiculous."

"$29 to ship a T-shirt, no thanks!" wrote another unhappy customer.

Nope - no thanks, Target. Despite your new international website proclaiming "Target Loves Canada," I feel like we need to make a clean break here and see other people. We had a good run, and if I feel the need for a quick fix home decorating booty-call sometime, I know where to find you.