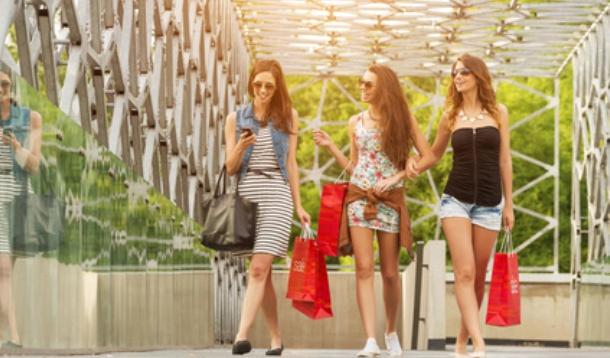 Yesterday came news of Target closing its 133 Canadian locations.  Then, only a few hours later, SONY announced it would be yet another retailer clearing its shelves. While SONY stores may not have had the same mass appeal Target did, the news is no less important, as more Canadian workers will now head to the unemployment lines with weeks of a potentially soul crushing job-hunt ahead of them. The news is grim, and as more and more retailers shut their doors – for whatever reason – it is safe to say the face of shopping in Canada - and the world- is changing.

If you are a Canadian old enough to drink, you are old enough to remember shopping at Zellers. Perhaps you even bought your first pair of jeans there, or your first box of “Flirt” purple hair rinse, or fancy new maxi pads with something called "wings." Maybe you ate French fries with gravy inside a Zellers at "The Skillet" restaurant with your girlfriends on Saturday afternoons, where the waitresses hated you openly but you didn't care. Why would you? You had a new box of purple hair rinse and a basket of greasy French fries, and some wings were keeping you confident. You were with your people, flawed as you all were, and this here - this cracked brown vinyl booth in the heart of a discount department store- was the Mothership.

Things change, and people with it. We now prefer to do a large percentage of our shopping online, where we don’t have to compete with crowds or tired salesclerks or low-inventory levels. Anything from new cars to tubes of toothpaste are available 24 hours a day with delivery options ranging from seven-day ground to instant cannon fire. Price comparisons are made at the touch of a button or the flick of an app, no longer from chatting with neighbours about what they saw marked down the last time they were out.

My memories of the mall consist more of who I was with than what I bought. There is no better place for "people watching" than at the mall, and some of the strongest characters in my life are people whose names I'll never know. There was "Mutton-chop Guy" who ran the shoe repair kiosk. He never made eye contact, even with those patronizing his booth. In my book, his back-story contains a long-dead wife and children who never phone. And there was "Crazy Annie," because as a teenager raised in the glorious pre-PC 80s, we said such things amongst ourselves without hesitation. Annie stood at the lotto booth inside the Zellers entrance six days a week - there was no Sunday shopping then; we were forced to spend time with something called "family" - despite having a stool where she could perch.

I live in the same town where I was born and I saw her years ago. She walked with a white cane and then not at all; and while I have always had a heavy feeling at the names we whispered, they came to surface in a great lump when I saw her pushed in a wheelchair. This was the reward for trading scratch-off tickets to too-young teenagers she was too milky-eyed to ID as such. Wrinkled paper dollars, handed to her, one at a time for hours every Saturday, and she never sat down. Now she sat in a wheelchair. And I feel like shit and feeling like shit makes me feel even shittier, because whose story is this? It only partially belongs to me. The rest of the story is hers and that of a long-dead discount department store.

I don't think "Brian" in Online Customer Support Services will ever be a memory or a lesson about judging others for my teenager.

Soon Target will go, and the loss of the big red dot means more than a smaller market in cheap paper towels and affordable kids shoes. It marks the beginning of the end for brick-and-mortar retailers, and by extension the loss of a meeting place for suburban teenagers looking for an afternoon of window shopping and greasy French fries. There will be no conspiring in the aisles. No perfume testing with a gaggle of friends. No smoking in the bathroom.  All the goods will be marked down and sold, and while the loss of Target may not have the cultural implications the loss of a Canadian retailer like Zellers did, it means loss of jobs and income and a history that will never happen. We'll rush in at the first sign of liquidation mark-downs and fight, first over unmatched bedding sets and then over industrial shelving and store lighting in the last fading days of a retailer. We'll root through forgotten cans of soup and bottles of nail polish like we're picking the last bits of meat from a dead dinosaur.

Target will go back the U.S. and maybe someone else will try. Or, perhaps retailers will be leery of outrageous lease costs and supply chain issues and "plan-o-gram" bullshit and everything will conflate in a giant bubble of "fuck it" and we'll all just stay home and click-here-to-add-to-cart instead.