The screaming will stop, I promise 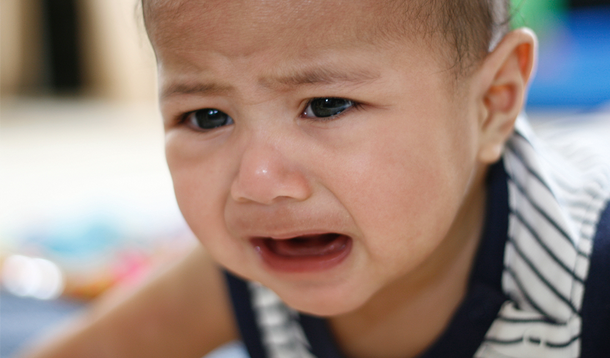 Got a baby? I bet they cry. I know they do, because that's their job.

Sometimes they cry a lot, and sometimes for seemingly no reason. You'd think that most people would understand this, but even I wasn't aware until I had my second baby. Because Baby Number 1?  She didn't cry. Like ever. One time, she made a sound that I thought was a cry, but no. It was a squeaky toy under the couch cushion. That baby was awesome and glorious and so easy! But she was a curse, also, because being spoiled by her temperament was a huge slap in the face come time for Baby Number 2 - or, as we called him affectionately- "Scream in a Diaper."

This baby cried long and loud and the noise didn't stop until the minute he turned 85 (this is a projected date). When he cried, we did what we could, which was comfort him however he wanted, because my ex and I aren't assholes. But some people don't pick their babies up when they cry and if you don't believe that, come with me to Walmart on a Saturday morning. We can hang out in the yogurt aisle where it is apparently more important to choose between Vanilla Greek Non-Fat and Lime Coconut Sugar-Free than prevent hearing loss in perfect strangers innocently looking for canned cinnamon buns.

I understand that you can't always get to your baby immediately and there's nothing wrong with seeing if whatever the problem is will work itself out in a few minutes. But when it escalates to ear-splitting levels, do something. DO SOMETHING NOW. Because if there's anything worse than the sound of my own baby crying, it's the sound of your baby crying.

People don't always know what the crying is about, but since 1998 - and the meteoric rise of the internet - Western civilization needs to know the answer for every problem - real or received - right now. Nothing is off-limits to scientists or savvy entrepreneurs, who've invented everything from battery operated marshmallow roasting sticks to diapers that analyze a baby's urine.

Baby cry analyzers are surely on their way to market, but we don't need this, and here's why: they sound complicated and stupid and almost entirety pointless, as well as expensive. I'm going to save science a whole lot of money here, and supply you with your own printable list of why your baby is probably crying. I call it:

Why Youse So Sad, Baybeez?

Step One: This is the most important step, and the one that will end most crying - PICK THE BABY UP.

Do not rock his carseat with your foot, do not say "shhhh...shhhh" while shaking his stroller, do not ignore baby while everyone else in the canned foods aisle plots your death, do not ignore the baby. Babies cry because they can't talk and if they could they'd be saying "Pick me up, you lazy bastard!" Picking up the baby will automatically alert you as to whether or not the baby feels too warm, or too cool, or if their tiny arm was stuck inside their onesie in a twisted configuration. It also enables you to look closely for teething issues or other discomforts. Attend to discomfort accordingly.

Step One solved almost all of my son's tears. It still does, although at a decade in and 75 pounds in, it's getting a bit harder to do a hip-carry.

Step Three: Still crying? It's okay; it happens. Try offering baby food of some sort. A boob, a bottle, a Philly Cheese Steak if that's what they're into. Whatever. Give nourishment. Continue rocking movement while administering food and love.

Step Four: Secure baby in approved car seat and get in the fucking car. Drive around for a bit. If after a hundred miles the baby is still crying, re-route GPS to a.) your Mom's house; b.) the doctor; c.) Tijuana, where they have really good tequila.

So there you have it. Call me a Luddite if you will, but I think that science sometimes makes life more complicated with its crazy inventions and "progress." (Except for blenders; if you think I'm smashing my ice for a frozen blueberry vodka lemonade manually, you're sniffing glue.) If scientists insist on putting time and resources into machinery which will help to explain the great mysteries of parenting, I would ask them to consider creating a machine which would actually serve some purpose. How about a special pair of glasses that can decipher why my teenager rolls her eyes?