And she looks different, too. 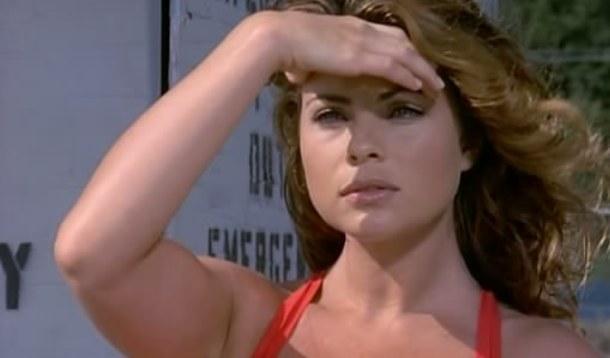 Yasmine Bleeth, formerly of Baywatch, now of Who? Wait, What Was She In Again?, was seen on a beach last week.

Can you believe the balls on this woman? A beach? Come on. Sure; you starred in a beach show, but, you're like, what? 46 years-old now? GET BACK IN THE HOUSE.

Bleeth appearing on the sand is not news because she is an international fugitive, nor is she a mythical sea creature come to surface. No, Bleeth has been MIA from the public eye for the better part of the last decade. I don't know why; perhaps she was busy. I once innocently put on the first SopranosDVD and no one saw me for three weeks; these things happen. But then last week a friend of hers - fellow actress Eileen Davidson - posted a group shot to Twitter which included Bleeth. And oh my god you guys, she has the nerve to look different than she did when she appeared in her trademark orange lifeguard suit! Because apparently she should be immune to stuff like stress and chocolate and time and gravity.

So it seems like here’s where we’re at with life rules:

1. Don’t marry someone who won’t buy you French fries when you’re pregnant and on bed rest;

2. Your debit card will be declined only when you’re buying lube and a package of deli ham and your high school nemesis is in line behind you;

3. Your body and appearance are not static and will change as you age.

It is this third point which causes many of us the most problem – but not in a self-reflective way. I don’t really notice how I change every year, because I live in this body and the sag has happened so gradually that it’s immeasurable. After two kids in five years I have lumps where I used to be lump-less and my ass melted into my legs rendering me essentially ass-less. My stretch marks resemble the Colombian River system and despite my young daughter proclaiming they resemble  “awesome silver flames shooting up from your vagina,” I could live without them. I am not as tight, thin, smooth, or friendly as I was at 25. And I still go to the beach.

But when celebrities age and change? Well that shit needs to stop immediately. We need to shut this whole thing down, STAT. If you appear on my television set in a bathing suit and your thighs are remarkable dimple-free and your boobs still float anywhere above your elbows, you had better stay that way for time evermore. Because if you’re changing and getting older – and I’m no physics expert, but I’m pretty sure the way time works is this: Then that means I am getting older too. DISLIKE.

How Thigh-Gap Has Become Latest Accessory for Young Women

The focus on appearance (for women and men) correlating to worth is bullshit and it needs to stop. I’ll do my part in the process by offering this handy chart to help you determine whether a person has intrinsic value:

So when the ten-years-post Baywatch Yasmine Bleeth spends an afternoon on the beach looking decidedly different, and yes, I’ll say it – larger  - people react, and not always kindly because unfortunately some people are assholes of the finest order (but they still have value. I think? I'm open to discussion on those jerks.)

Grab yer suits, everyone; it's time for a Mom-body beach takeover!