Not a parent of a teen just yet? Prepare yourself... 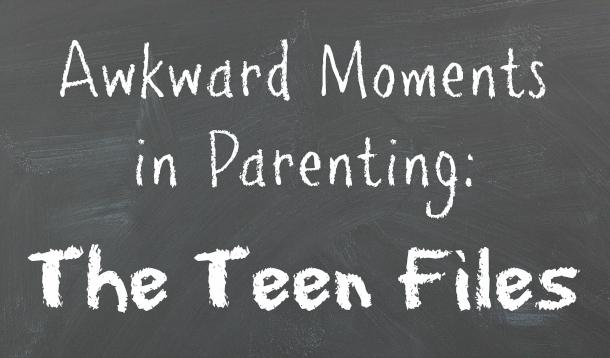 Life is full of awkward moments. I’ve spent 41 years stringing them together, and there’s been no shortage of material since my oldest child became a teenager. It’s a regular grimace-fest here on a regular basis because anything I do embarrasses and mortifies this teenage child. You too can expect to encounter several awkward moments before your youngest heads off to University or runs away to marry the drummer in a Coldplay cover band.

Meeting your son or daughter’s first romantic interest can be pretty awkward. No one is comfortable. Understand that there is no way you can make this better for anyone involved, so let any allusion of dignity go by the wayside. You can be wearing the newest fashion trends, have current music playing, and serve a delicious tried and true meal, but none of this will matter. You may as well pick them up after their movie date wearing fisherman hip waders and a crocheted beer can hat because you are not cool. Do you hear me? Of course you don’t; you’re like 100 years old.

I tried to play it cool when I met my daughter’s boyfriend for the first time. By the time he left (early, go figure) I had explained that our fireplace was actually a magic portal to another dimension and told him the story of how when I was a teenager I once peed on my boyfriends couch, necessitating an abrupt morning break-up lest he discover the stain before I had a chance to leave. (In the end I just flipped the cushion over and told him “I think we’re better as friends.”)

Disciplining Them in Front of Their Friends

Sometimes we need to correct and reprimand our kids in the moment. They’re like dogs during housebreaking in the way that you must correct the behaviour when it occurs because — just like dogs — teenagers have very short memories. The typical teenager is bombarded with information during their waking hours but lack a fully matured cerebral cortex to process the input. Simply put: dumb it down. Teens aren’t stupid but they don’t listen for long so your goal here is to be fast and effective. For example: When I need to get my daughter’s attention, say, at the mall when she’s with a group of peers, I go for the big guns. Yep; birth story. If she doesn’t answer me or respond to texts within a reasonable amount of time, I locate her and gather her and friends 'round for the haunting tale. “Hey, Daughter,” I start. “Remember that time I squeezed you out of my vagina?”

That’s as far as I’ve ever got. She’s usually in the car by the first beat on “vagina.”

When They “Catch” You

Lots of parents get caught "in the act" while their children are young, so what’s the big deal about getting found out when your children are teenagers? SO MUCH IS WRONG. First of all, little kids will believe that you and Daddy were simply practicing for Leap Frog League try-out, but your teenager isn’t buying that. Additionally, they may even know how what you’re doing feels and could possibly be aware it feels sort of pretty good. Sex is something you want to put a lockdown on immediately. Do what an enterprising friend of mine did — put a few tennis balls in the dryer and shift laundry to every night at 9PM to buffer out Parental Sexy Time.

When You Catch Them

So your child — the one who bathed a grand total of twice from ages 11 to 14 — has started taking 45-minute showers every night. Your hot water bill is through the roof and no one can flush a toilet at night without causing third degree burns. Things are getting ridiculous and you think you need to put your foot down. Don’t. It doesn’t matter that no one else can shower until midnight and that your son’s hands are permanently water-logged and resemble dried apricots. You do not want to know what’s going on in there and unless you want to haul a 50lb laundry basket down to the laundry room every week, you’re best to just keep on keepin’ on. Trust me.

It can all seem like a bit much sometimes, having to watch and monitor everything we say and do to avoid awkward moments. My daughter won’t acknowledge my presence if I run into her in a public setting, yet she once shit all over my leg at a wedding. I plan on spending my retirement years evening the score.

Is Your Teenager Ready for the Workplace Trenches?