(Because We Were Idiots Once, Too) 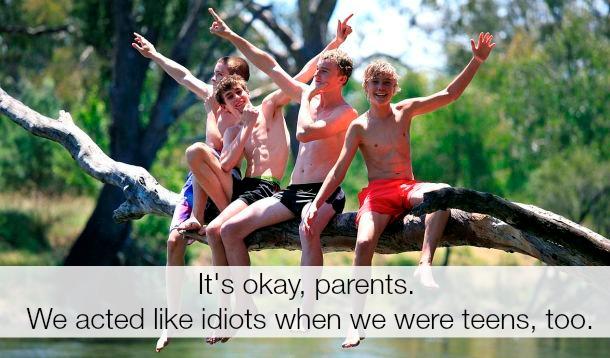 Remember all the stuff we did when we were teenagers? Sometimes I’m amazed I’d made it through those years, and while I was never a kid who actively bought into invincibility clause, my past behaviour certainly indicates that on some level I believed this was true. It’s funny to look back through the lens which is maturity and realize that, yep; I was sort of an asshole.

My daughter often asks me to tell her stories of when I was a teenager. I’m a storyteller by trade and by hobby and it’s hard to gloss over or withhold several details crucial to the plot, especially when someone is clamouring for them. So far I’ve told her only benign tales of my youth, with minor escapades thrown in for good measure and to maintain my street cred. I doubt she’d believe I spent my downtime at 16 reading to the blind or crocheting shawls for Worldwide Abandoned Grandmothers Fund.

The teenage memories I am alternately proud and ashamed of remain in the vault. Those stories are only for me and the other players. When my daughter presses hard for more,  I simply report that I can say no more; that I am bound by court orders or pinkie swear to never reveal details of such events. Then I look off into the distance and act melancholy for a few hours for good measure.

At 17 it would have been unheard of to tell our parents we were off to drink contraband wine behind the Mill Pond with a 20 year-old sophomore from second period French class. We blanketed our parents is snugly warm swaths of fleecy lies, so that while they thought we were collecting school supplies for underprivileged children, we were actually rearranging the letters in local advertising signs from “Excited to Our Welcome New Patients “to “Sex Parties Held Nightly.” And as hard as it would have been to come clean to our parents, it’s nearly impossible to do so now to our kids. We know we were stupid. We all did stupid things. But we’re grown-ups now and our stupid is a different kind. It’s “forget to add fabric softener to the rinse cycle” and “left milk out on counter overnight.”

It’s not the same pattern of dumb decision making that happens in teenage brains. They can’t help it; it’s biology. Don't think for a minute that idiocy and short-sightedness are a condition of the current generation. That shit is a genetic flaw and it affects almost the entire first world population. Basically, if you were not helping to support a family or milking goats or panning for gold at 17, you were probably an asshole sometimes, too.

I want for my teenager the same things most people want for their children: security, safety, education, agency, and respect. But I also want her to have the freedom to sometimes act like an idiot, albeit a reasonably safe one. I’m starting to realize that I can’t be Mama Bear Buzzkill forever, and so I am loosening the reigns, using my own teenage experiences as a yardstick. Ultimately I believe she is entitled to make mistakes and create memories and this privilege cannot always be denied simply on the basis of my discomfort.

It is my hope that my daughter will emerge her teens with a few battle scars, some secrets, and an overflowing handful of memories — some of which she should never tell her children.

Bridging the Generation Gap: 6 Tips for Parents of Teens