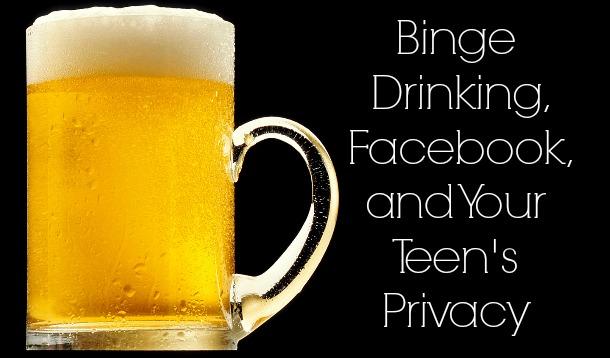 I drink. I guess that makes me a “drinker” but not in the “cannot function without it” way, rather the “I enjoy the flavour and it goes well with meals and okay, sometimes it helps me function” way. There is alcohol in this home. Alcohol not currently under lock and key, but out of the way with the exception of what is in my wine glass after 5pm. So far my teenager has shown no desire to drink. I know that by her age — 15 — I had been drunk several times, primarily on homemade Italian wine which flowed like a river in my town. That river system also connected beer lakes and a vodka ocean. It was never a problem to get our underage hands on it. If our home supply ran dry, it was easy to swing a six-pack from a stranger in the Beer Store parking lot.

I imagine my daughter will one day get drunk. I’d prefer she does it legally and she’s mature enough to know her limits, arrange for a proper ride or accommodations, and to stay away from any neon-coloured vodka coolers spelt with a “K.” But that’s not likely.

Most of us got drunk a time or two before maturity. I have some pretty good blackmail material should any one of my high school circle decide to run for office, but no one ever drank to the point of needing medical care and no one died from alcohol poisoning. And thankfully the only cameras available to us took film and money to develop and no one had any, having spent it on beer and cigarettes. Looking back, it was (mostly) harmless fun.

Binge drinking is an entirely different matter because consuming massive amounts of alcohol in a short period of time can cause serious health risks and often results in death.  When you’re young and you’re drunk, well, you’re double stupid.  Your brain is swimming uphill many days, and while intoxicated it’s swimming uphill with rubber boots on. Making rational choices after a few drinks is hard enough as an adult, as evidence by my recent failed wine pairing of “Shiraz” and “home haircut."

Yesterday I saw a post on Facebook — a post shared by 307, 000 people at the time I write this.  A mom posted a picture of her daughter lying in a hospital bed with tubes and ventilator hoses which were necessary as a result of the daughter’s binge drinking. She and a cousin raided a liquor cabinet and shit got real very quickly. This girl almost died and her mother was frantic and there is absolutely nothing I give this woman and her daughter but my best wishes for a full recovery. The photo was not shared to shame her daughter, but rather as a warning for other parents to be aware and perhaps as a catalyst for discussion. Good points, all of them.

So while I absolutely agree with the message, I didn’t share the post because the daughter’s face and name are featured. We all make mistakes but we don't all have them shared with the world. This message could have posted without names or images and ask yourself if it could have been delivered without personal information. Yes; it could. Perhaps less dramatically, but how does it make sense that we teach our kids to be careful about posting intimate private moments online and then we do it? How do we rally against kids posting drunken neknomination photos and then turn around and do something similar? I only have access to one teenager, and here is her unfiltered reply to this situation: (I have her permission to post this.) 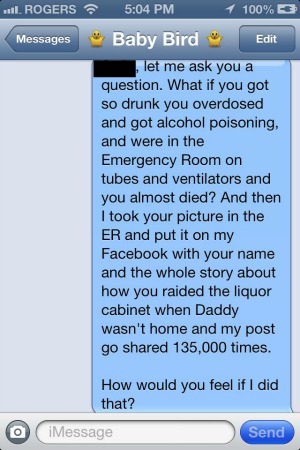 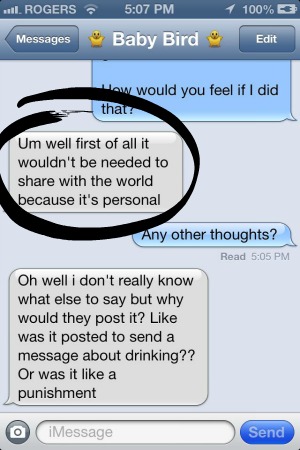 This will blow over. In the vast chasm of rage that is the internet, this will soon be forgotten and few people will recall this girl’s name or the details of her medical emergency. But when she recovers (and thankfully it appears she will) she will still be a 16 year-old girl who — with her 16-year-old brain — will believe the entire world knows what a stupid mistake her teenager brain allowed her to make. I was a teenager. And I have a teenager — a teenager who is now getting yet another talk about alcohol and privacy and I’ll probably need a glass of wine to get through it.

Unsupervised Parties and Teens: Do As I Say, Not As I Did

Your Teens and Their Friends - It's a Whole New Ballgame