Why Does This Job Get Harder the Longer You Have it? 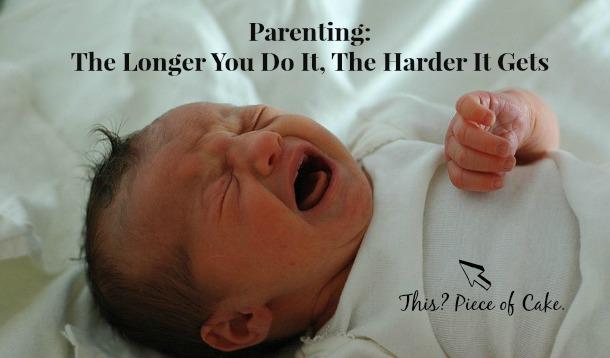 The other day I stumbled upon a parenting blog while doing a Google search. That blog’s blogroll led me to another blog and then to another blog and then to an afternoon of shaking my head and wondering when we all became so short-sighted. I shook my head for these parents because they have no idea what is coming. It’s not that the content of the blogs was harmful or ignorant — it was just incorrect. But it wasn’t “wearing white after Labour Day” incorrect; it was “striped knee socks with sandals and no pants” incorrect.

The blogs in question were written by parents of various ages and backgrounds, but they did have one thing in common: they were all parents of babies under two years old. The underlying theme of the posts was generally positive, and no worries; everyone loves their babies. There is — as you would expect — a lot of talk about how hard dealing with a baby is. And it is. I’ve been there — twice. My first baby was a happy, easy child who slept whenever, wherever. If you laid her down, her eyes closed just like those “real life” baby dolls. I remember thinking how I must be the best mom ever because this was so easy. As much as I wanted to believe it was my innate maternal skill, I was soon proved wrong, because when baby number two arrived, all bets were off.

Babies and toddlers are hard. They can be demanding and needy and forceful and sullen and dance around in underpants and rubber boots designed to look like frogs and they stick things up their nose and into sockets and they cry and make messes and…I’m exhausted reliving it. But imagine taking that toddler and her friend and dropping them off 50 kms away for a whole day at an amusement park where she could be stolen or maimed or fall off a roller coaster because Curtis the Carnie can’t read and faked his way through the entrance exam at Carnie school. That’s what I did recently. My daughter is 14, not a toddler at all, but in my eyes she will always be a small dimple-cheeked child whose warm presence on my hip was such a constant in my life that now, without a baby there, I feel weightless.

By all accounts I should have been an even better mother that second time around, because I had a few years of real life experience by then. My internship was over and I was ready for a senior position! Where was the key for the secret executive bathroom because I was now on the top floor of Parenting Incorporated!

If you’ve seen “Grease 2” you know that sometimes things aren’t as good the second time around. Baby 2.0 was just as healthy, just as cute, just as loved and wanted. But he never, ever slept, and he cried so loudly my hearing is partially damaged. Seriously, what? I should have realized his vocal power when as a 15lb infant he accomplished what several teen years of cranking Led Zeppelin cassettes could not. I thought this parenting gig was supposed to get easier with subsequent children and years under your belt, but it was much harder. I know it can go the other way – you can have a “difficult-to-handle” baby first, and then an “easy” baby later, but I think that phenomenon has statistically low occurrences due to sciencey evolutionary reasons, none of which I can explain except to say that if the hard baby came first there would be a whole lot of single child households in the world.

During his baby years, I looked forward to the good times ahead. The kids would be able to take of their own bathroom needs and fasten their own seat belts. They could make a sandwich for themselves. Or me. (Mostly me.) They’d practically raise themselves from age seven or eight!

There are teenagers in this house now and it’s just getting harder, and there is a decided lack of sandwiches being prepared in my honour. Some things about parenting do get better. For instance, I haven’t had to look at anyone’s behind in a business manner in a long, long time and don’t think I’m not thankful for that. Some things are harder; a lot of things are a lot harder. Balance is a word you’d do well to forget about once you have a child in your life, because Ying is usually stronger than Yang and Yang can be a real asshole sometimes. Teenager problems are harder to solve and most of time you shouldn’t be solving them anyway. I do not like this. I am a fixer. I do research and consult people and determine resources and… guess what? Nobody care. Some lessons have to be learned the hard way, and the hard way is harder for the parent than the child in all but 5% of cases.

I asked a mom I know whose kids are all grown — two are married and her youngest is away at University. “So,” I asked, “When you think about all your kids, and all the stages of development you’ve experienced, what would you say was the easiest age?”

“I’ll let you know when it happens,” she replied.

The Cost of Raising a Child: The Teenage Years