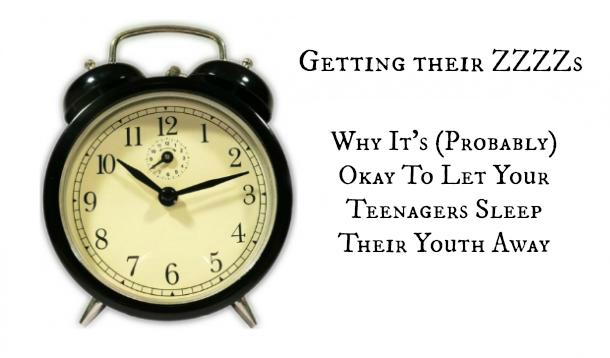 Your teenager is probably a morning person in the same way that Alec Baldwin is a people person.

Sure, there have been accounts of teens who rise with the sunshine, but I put those mythical creatures in the same category as I do things like “unicorns,” “self-cleaning oven,” and “successful NBC sitcom.” Real teenagers like to sleep — a lot. My 15 year-old daughter is a great kid, but the girl likes to sleep in. To me — someone who hasn’t slept in since September 25, 1995 — I find this infuriating, and I have no problem admitting it’s simple jealousy on my part.  Pre-pre-pre menopausal hormones coupled with my need to get shit done preclude me from sleeping past dawn most days of the week. Because I get up early, I also like to go to bed at a decent time. Last week I had eaten dinner, cleaned the kitchen, packed lunches and was winding down on the couch when I decided enough was enough and the time had come to turn in for the evening. It was 6:14pm.

At 6:14 pm most teenagers (mine included) are just getting started. I have no idea what time she actually turns in for the night because I am out like a light by then and so I’ve had to institute a few rules regarding bedtimes which apply in absentia. All tech (including iPhone) must be turned off by 10 pm and be charging in a location outside of the bedroom, and lights are off by 11pm on weekdays. “But I can’t sleep!” she complains. Well, I can’t dance or cook or do simple math and I’m not crying. Life sucks, my dear, and your body needs rest whether you understand that or not. High school starts at 8:20 in the morning and she’s on the road by 7:55, so limits during the week are necessary.

I’ve always been a “pick-your-battles” parent, and so I’m a more lenient on weekends, especially since she's often playing catch-up with slumber. But I don’t run an all-night underground rave club, so there had to be some concessions. I’ve read all the studies and I know that doctors and geeks in lab coats who study human brains conclude that the teenage brain is wired to stay up late and sleep in and that’s fine, as long as I’m not the one paying for it. I approach the need for sleep with my teen this way: Follow my rules from Monday to Friday, and on the weekend you can set your own level.

I’ve told her that I will not be held hostage to a bad mood when she chooses to watch all eleven seasons of the original Beverly Hills, 90210 in one weekend because “those clothes are goddamn hysterical.” And every single one of her responsibilities must be met before a decent hour and there will be no 10:30pm meltdowns over wrinkly uniform pants or lack of printer ink for an assignment started 15 minutes after Staples closed. The rest of the family will not cease regular activity so she can sleep through Sunday and yes, I expect kind treatment come morning. Holding firm with these rules works, and as does her making sure she has everything ready for school the night before. I can’t magically make her a morning person, but I can insist on respectful behaviour, or at least silence if she can’t muster even that. And I’m not rushing around to accommodate an oversight; if she misses the bus because she overslept, that’s her problem.

I can’t win against biology and if her brain is wired to spark to life at 8pm, we need to work with that limitation for now. Putting her in the bedroom farthest from mine and instituting no noise/tech works well, and I just relegate her to the basement on weekends. I remember the allure of staying up until all hours when I was her age and so I know it doesn’t last forever. Pretty soon she’ll be 40 years old and wishing someone could convince her to hit the sack by 7pm.