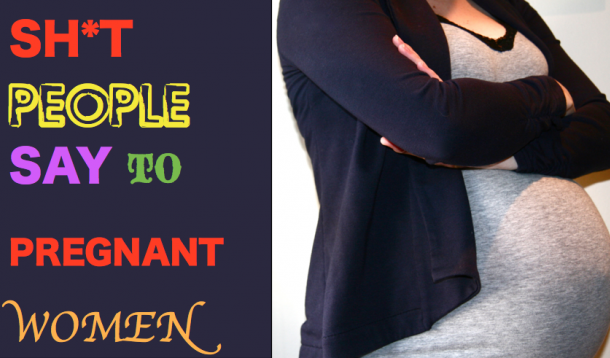 Well, it’s week 38 (eek!) and I’ll be honest with you: I’ve really enjoyed my pregnancy. Even with the aches and pains here and there, I’ve been really fortunate. I’ve even been fortunate enough to escape most of the heinous pregnancy-related comments that friends and random strangers alike are capable of dishing out.

Yes, it’s true. You don’t always get the sweet “ahhs” and congratulatory compliments you might expect. Once the world can see that you’re pregnant, it seems as though you become public property and people lose all sense of self control. Their eyes glaze over, and they start frothing at the mouth. They just can’t hold it back. They start asking you overly personal questions while groping your protruding belly.

After speaking with many pregnant women online and in day to day conversation, I’ve compiled a list of real comments made to real pregnant women.

This is the SH*T people say to pregnant women.

(along with my hormone induced retorts. I have two more weeks to play the pregnancy rage card, so I’m going to go for it!)

SH*T THEY SAY: Wow, you’re going to have a BIG baby!

WHAT YOU SHOULD SAY: Yes, yes I will. And I bet my baby could beat up your skinny-ass-ugly-baby in the playground. So suck it.

SH*T THEY SAY: Are you sure you’re not having twins?

WHAT YOU SHOULD SAY:  Well I wouldn’t be surprised if I was. Your husband is a very fertile man.

SH*T THEY SAY: Are you pregnant, or just fat?

SH*T THEY SAY: So how much weight have you gained anyway?

WHAT YOU SHOULD SAY: I’m not sure exactly, but while we’re on the subject of inappropriate questions—have you had a bowel movement today?

SH*T THEY SAY: Are you scared that labour will hurt?

WHAT YOU SHOULD SAY:  No I’m not scared it will hurt. I have a gaping vagina. I’ve just been hoping I could hold the baby IN this whole time!

SH*T THEY SAY: So, is your cervix dilated at all yet?

WHAT YOU SHOULD SAY:  Hmm. I’m not sure. Can you have a look at let me know?

WHAT YOU SHOULD SAY: Actually, I still have two months until my due date. But thank you for implying that I look like a whale. I have now added you to my hit list.

SH*T THEY SAY: You’re going to go past your due date for sure!

WHAT YOU SHOULD SAY: That’s like telling a child that Santa isn’t coming on Christmas day. You’re a horrible person (and then kick them in the shins and run away)

SH*T THEY SAY: (loaded with judgement) Are you planning on breastfeeding?

WHAT YOU SHOULD SAY: No, I’m actually not planning on feeding my baby. Period. I figure it’s survival of the fittest.

And, there you have it. It’s truly a wonder that you don’t hear daily News stories of pregnant women losing it and beating up random strangers. And as you can see, it would be totally justified!

In conclusion, I urge you to say one thing, and one thing only when you encounter a pregnant woman.