5 Strange Ways I Feel Connected to My Kids

WHO NEEDS LAB RATS WHEN YOU CAN OBSERVE YOUR OWN CHILDREN? 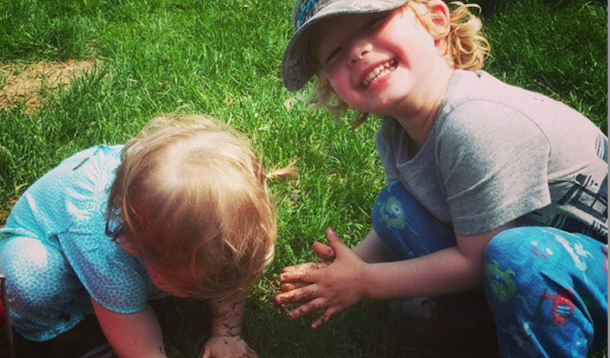 It probably comes as no surprise to you that I love my children. (I think most mothers love their children...most of the time).

I love hugging them (Elmira from Anamaniacs style) kissing them (obsessively) and making them laugh (they think I'm freaking hilarious! They're only three and one, but I'll take it!)

What I also love is observing their behaviours and watching their personalities develop. They're like my little lab rats, and it's awesome (but they're not rats so that makes it even more awesome).

As an only child, I always longed for a sibling so we could stare at each other all day long and compare our similarities and differences 'cuz that's what siblings do, right? So now that I have my own kids who share my DNA, it genuinely excites me to observe them and see what traits we share.

NOTE: No, I didn't just have children as part of a large science experiment (well, it wasn't the only reason...)

So far,  there are a few things that I've noticed that make me feel oddly connected to my children:

MY SON IS GOOD AT CHEWING GUM

As an avid pack-a-day gum chewer myself, I understand the allure of gum. But I wasn't about to let my three year-old son chew it. But then one day, he found a piece of gum on the floor of the van (un-chewed, thankfully) and promptly popped it in his mouth. I thought for sure he'd swallow it, or start playing with it and I'd have to take it away. But no. My son responsibly chewed the gum, and when he was done, he gave it to me to throw away. He's a fucking genius.

MY DAUGHTER IS AN AVID PICKER

If you've been reading my blogs over the last few years, you'll know that I have a sick obsession/fascination with picking things. I think this is predominantly a female trait that is somehow linked to estrogen levels (that's my very scientific hypothesis anyway). But my daughter, at the age of one, is already incredibly skilled at picking things like stickers and the wall decals on her brother's room - and she LOVES it. I can already tell she gets the same sense of satisfaction as I do out of a great pick. It makes me smile.

BOTH OF MY KIDS LOVE CEREAL

This one is pretty self explanatory, but I eat cereal 365 days a year, and I share this morning ritual with my kids as we snuggle on the couch and watch TV. Bite sized shredded wheat or All-Bran. Sometimes we throw some Cherrios or Shreddies into the mix, but that's only if we're feeling rebellious. My daughter is also incredibly skilled with a spoon. But that's probably because she is also a fucking genius.

MY SON HAS MY HUSBAND'S CROOKED PINKY

As soon as my son was born and placed on my chest, one of the first things we noticed was that he has the same crooked pinky finger as my husband. A sweet little trait that I'm happy they share. As long as he doesn't inherit my husband's stinky feet, I'm happy!

MY DAUGHTER HAS "HUMMINGBIRD TOE"

When my husband is sitting and relaxing, he'll be totally still except his big toe vibrates as fast as a hummingbird. It's quite funny to watch. He doesn't even know he's doing it. Well, lately, my daughter has started to lift and wiggle her big toe whenever she is sitting or concentrating. As long as she doesn't inherit my husband's farts, I'm happy.

NOTE: Whenever I mentioned my husband's endearing traits, I also added some of his less-than-endearing traits. I'm such an asshole. But it's my revenge for his loud chewing. *boo-yah* I did it again. I have a feeling I'm never going to with the "let's have another baby" debate if I keep writing blog posts like this...

So tell me, am I alone in these genetic observations, or have you also noticed weird similarities between yourself and your kids? What are they? I'd love to know!

RELATED: Are You A Picky Parent?