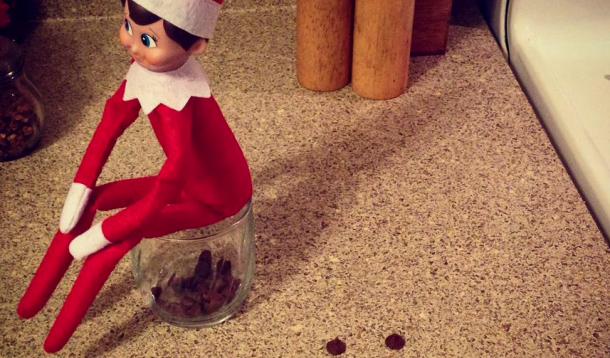 Last year, my Mom bought an Elf On The Shelf for Cole, and I made her return it.

I know. I'm such a Grinch. But I had my reasons, and they were good ones. I didn't like the idea of Santa having a "spy" in the house to keep an eye on Cole's behaviour. I didn't like the idea of a commercialized forced tradition. If there was going to be an elf in my house pulling pranks, I wanted him to be one that I created - not one I bought in a "kit." Truthfully, I thought it was trendy and stupid.

Well, much like the time I tried to avoid the trend of skinny jeans (why did I wear boot-cut for so long?!?), I have to give in and admit something (and I don't say this often, ask my husband, but...) I was wrong. I like Elf On The Shelf.

Did You Know Skinny Jeans Can Cause Nerve Damage?

BUT: I still don't like the idea of using him as a spy. Save that for James Bond. He's better at it, has cooler gadgets, and is much sexier. (Sorry Buddy; you have creepy eyes.)

What I do love about Buddy though, is how adults are using him to have fun with their kids. As someone who often refers to herself as a 12 year-old boy (mostly because I still laugh at words like "balls,") seeing parents get in touch with their inner-child and being creative in this way really makes me smile.

I really like the idea of parents tiptoeing around their homes at night, challenging themselves to come up with unique ways to hide a little toy elf. My husband is proabably reading this thinking "Are you kidding me? That sounds like torture! I'd much rather be watching Ray Donovan." (Which is an excellent show, by the way.)

But that's the thing. Elf On The Shelf forces people who are normally not that creative (my husband) to think outside the box, let loose, and have fun. I guarantee that once we got going with the whole charade, my husband would be totally into it. Okay, maybe we'd have to drink some wine first...but then he'd totally be into it. Remember that time I convinced him to wear a pair of antlers and dance on stage with me? Exactly.

So if you're like me and you're one of the last few remaining households on planet earth who don't have an Elf On The Shelf, maybe you'll reconsider it? Just for fun? Honestly though, it doesn't need to be Buddy. Make your own Elf. Make "Mr. Clementine Head" and shove an orange on a skewer. Boom. A unique family tradition.

The key is to have fun and be creative. Your kids will get such a kick out of it. And, if you're anything like my friend Megan, you might make some honest mistakes when posing your elf that will provide a lifetime of laughs (see her image below. And if you can't see what is funny about this picture, we cant' be friends). 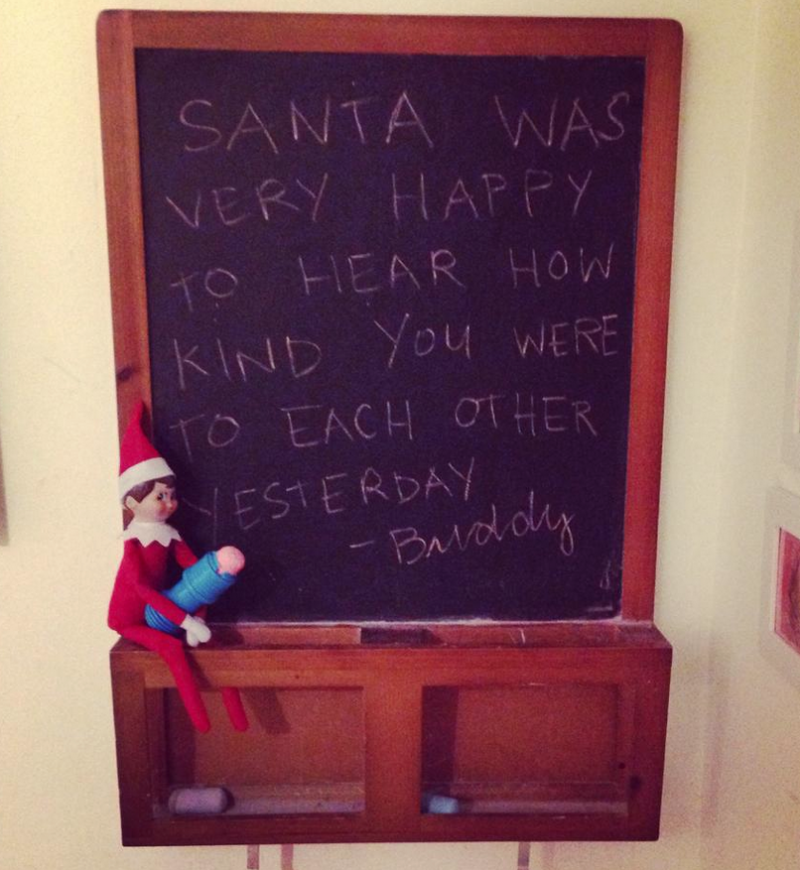