AN INTERVIEW WITH TODD KESSLER ABOUT HIS NEW CHILDREN'S BOOK 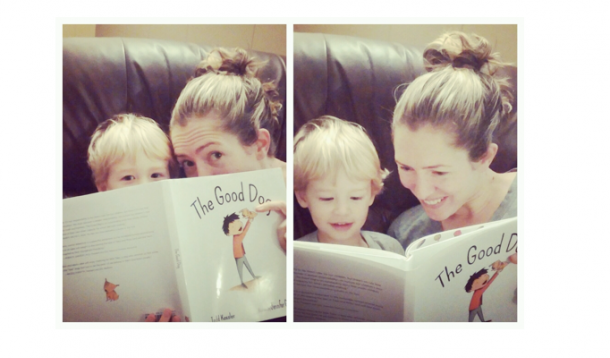 Well, folks, I’m moving up the echelons in the interview world, and I'm no longer just interviewing family members! 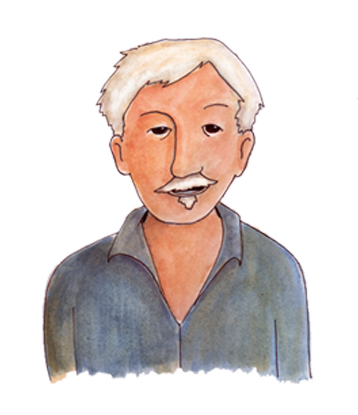 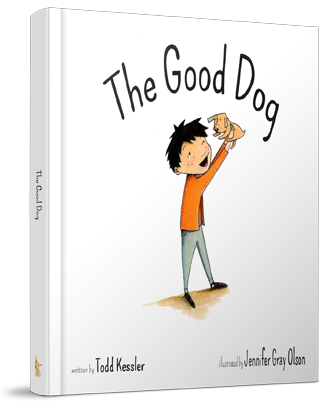 Today I had the pleasure of interviewing Todd Kessler, co-creator of the award-winning children’s show "Blue’s Clues," about his new book The Good Dog.

As someone who works in television and has aspirations of writing a children's book one day, this was even more exciting for me than meeting Brad Pitt (Yes Todd, you can use that as an official quote for your book review. And no, I've never actually met Brad Pitt.) Moving along...

Brad Pitt Talks About His Dark Side

I was sent a copy of the book last week, and I spent a good amount of time reading it with Cole. A lot of time, actually. Because it’s a long book. Really long. 100 pages long, to be exact. But guess what? At two and a half years old, Cole sat still the entire time and was completely captivated by both the story and the stunning illustrations. He had a ton of questions, "Why doesn't the doggy have a home? But why, Mommy? Why?" (Okay, maybe not a ton but a repeat of the same one.) Luckily, I was able to distract him because the characters were so compelling (or perhaps it's the delicious drawings of the treats in the bakery?) Either way, he was happy and excited every time we turned the page.

Toddlers & The "Why" Phase

What I loved most about this book, however,  is how Todd Kessler challenged convention with it's length. He had a story to tell, and he wanted to tell it. He didn’t worry about the word-count. He focused on telling a rich story with interesting characters. A story that would take his young readers on an adventure and challenge them with concepts of good vs. evil, morality, and ultimately ask them difficult questions: when is it okay to break the rules?

Well I was lucky enough to speak with this rule-breaking writer / director today, and here is what he had to say about his new book:

JW: I’m not sure if your publicist told you much about who I am...

TW: She told me you were very important.

JW: Ha! Yes. So important that I’m interviewing you while wearing my pajamas. (Probably shouldn't have said that). Anyway, I have some formal and some informal questions for you. Let’s get started.

JW: "Sesame Street" was a big influence for "Blue’s Clues," did you have any children’s authors influence you for The Good Dog?

TK: That’s a good question. Certainly, more than anyone, Dr. Seuss. Seuss’ books were unique, as many of them were long and a similar length to The Good Dog. Horton Hears a Who is actually the same word count as The Good Dog. I was excited that he tells stories with beginnings, middles, and ends, for the most part. Many of his books have quite a bit of adventure in them as well.

JW: Tako is main canine in The Good Dog. Why do you think children relate so well to animals?

TK: I think on a really basic level, dogs are great characters for pre-school and young audiences because dogs are like young children: they’re trusting and they want to please. They have a lot of qualities that are very kid-like. Children identify with those characters. Tako is like a pre-schooler. He wants to be good, but he has trouble sometimes.

JW: Before you published the book, you work-shopped it with groups of children. Did you make any changes to the story based on their feedback?

TK: There were some things that were emphasized more than others...I believe I added the toddler twins after hearing what kids had to say...Interestingly, they (the children in the workshops) did drawings too. Jennifer (the illustrator) wasn’t sure how to depict the town and the relationship of Pritchard’s store to the Happy Family Bakery and she was inspired by some of their drawings which were confidently two dimensional depicting that street. So some of her visual depictions of the street came from kids' drawings.

JW: The illustrations in the book are beautiful. What do you look for in an artist when choosing an illustrator to help your story come to life?

TK: I look for character work. Especially for this. I looked at various sources, hundreds of portfolios of artists, and finally I found Jennifer and I really liked her work. I sent her the story and she read it to her kids and they were excited about the villain, and they loved the concept so she called me back and said she wanted to work on it.

JW: What would your criticism be of some of the children’s books that line shelves today?

TK: Kids are really tuned into adventure and conflict...the world of publishing wants to be nice to children and coddle them a little bit, but villains are really missing. There are people in the world that do things that are not nice, and I think it’s exciting to kids to encounter those characters and see how a character like Tako deals with an imperfect character in the real world.

JW: On your book’s website you have some adorable “expert” reviews by the real experts: kids. In Mary’s review, she says she hopes for more stories about Tako. Is this something we can all look forward to?

TK: Oh absolutely. When I had created the story in my mind there was another character, a cat. But that part of the story didn’t really fit into this book. So Jennifer and I, as we speak, we are halfway through the sketches of illustrations for the second book. It’s called “The Good Dog and The Bad Cat.” It will come out in the spring of 2016.

JW: What do you hope The Good Dog readers will take away after reading your book?

TK: I hope that they’ll take away the idea that although there are rules in the world, you also have to apply your own knowledge and common sense in decision making.

JW: If you were to write a book about your life, what would it be called?

TK: I guess it would be... “One Thing Does Not Follow The Other.” (laughs) In my career I’ve done television shows, I’ve done a love story for teenagers, I’ve done work for very young kids so I think it drives the entertainment industry crazy. They like their artists to be branded and do one thing, but for me I like to go where the story is.

JW: In another life, if you weren’t a writer / producer / director, you would be a...

TK: I would be a musician maybe.

JW: If you could have one super-power it would be?

TK: I’m not good at these questions (laughs). I don’t know. I kind of like not having a super-power. You know? Because that is what life is all about...trying to figure out how to do things.

JW: If you could give your 10 year-old self one piece of advice about the future it would be:

JW: I like that. I like that a lot...My sister-in-law who is ten years younger than me grew up watching "Blues Clues" so she’s going to faint when she finds out I got to talk to you today.

TK: If she comes to Los Angeles she can come to my house and sit in the Thinking Chair.

JW: Do you really have that?

JW: That is amazing. Thank you!