When A Good Sleeper Turns Bad

ONCE UPON A TIME MY SECOND BABY SLEPT WELL AT NIGHT... 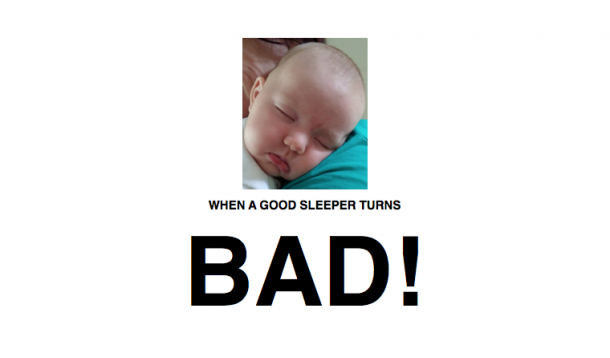 If you've been following my blog, you might remember back in May I wrote this: Six Tips On How To Get Your Newborn To Sleep At Night. And my first "tip" was this: GET A BABY WHO SLEEPS!

Well, guess what? My baby who slept doesn't sleep anymore.

I want to throw a temper tantrum. I have thrown a temper tantrum. This just isn't fair. I've already struggled through 2.5 years of a non-sleeper, and he's just started sleeping through the night (and still not every night).

When my second baby was a good sleeper, I thought the Sleep Gods were on my side. I thought I had earned the right to experience a good sleeper. I was actually dreaming again, and not hallucinating during the day! I was able to detach my caffeine IV, and put together coherent sentences. I even started brushing my hair!

And then...around the 3-month mark, my beautiful little sleeper decided she'd had enough and we're up every 1.5 to 2 hours. Every. Single. Night.

It's cruel. It's painful. I've stopped brushing my hair.

Nothing tastes better than chocolate these days, and I catch myself feeling envious of my cat. Lazy window laying bastard.

Why, oh why did this happen? Is it because I publicly admitted to having a baby who slept? Can't I just throw salt over my shoulder or something to reverse the bad luck? Wrong superstition? Fuck me. I'm too tired to figure this shit out.

I guess it's a good weight-loss regime, right? Burning calories around the clock. Though it might help if I stopped eating chocolate.

Oh shit, now I'm thinking about chocolate. But it's 9:30pm, won't it keep me awake? Fuck it. I'll be awake again in an hour to feed the little monster anyway. Where are those chocolate chips...

To read more about my sleep adventures, here is a post about the first time I got a good night's sleep with my son (and it didn't happen again til a year later). Or you can read about how pissed I'll be if you ever wake my sleeping baby!