I NEED A 12 STEP PROGRAM FOR DUMP TRUCKS 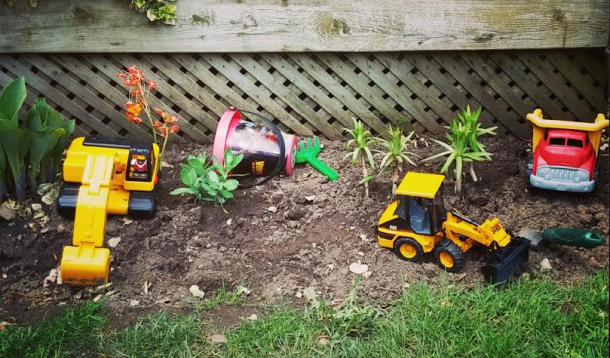 Hello, my name is Jen and I'm the mother of a two-year-old who is addicted to trucks.

He eats, sleeps, and dreams about trucks. Excavators, backhoes, front end loaders. He knows all the names, and all of their parts. Shanks, stabilizers, and blades.

At bedtime, I draw pictures of various trucks on his back to help him fall asleep. I get in trouble if I accidentally draw wheels instead of tracks. I can never remember which truck has which, but he sure does.

The same thing happened yesterday morning, but he told me he was looking for his "forklift," which sounds a lot like "fuck it" to the untrained ear.

How did this addiction happen? Seriously. How? Which allele in his DNA is responsible for this? It must be the one paired with the "compelled to grab my penis every 5 seconds."

With all of our gender neutral Melissa & Doug toys and all of my efforts not to influence my son's interests based on his genitals, this happens. THIS. This incredibly predictable and typical "boy" addiction. Trucks, trucks, trucks, and more trucks.

When he eats his cereal in the morning, he pretends that his arm is a crane as he mechanically tries to grab his spoon.

Every now and then he pretends to pull an imaginary dump truck out of my cleavage. "Here you go Mom!" And then I have to thank him as I pretend to hold the little imaginary truck in my palm.

When we are on the highway, the best way to distract him on the way to Grandma's house is to talk about every single truck we see. I'm constantly on truck lookout. Even when he's not with me. I've been known to film trucks working on the side of the road so I can excitedly show him when I get home, "Look Cole! An impact hammer!"

The garbage man on our street feels like a minor celebrity with the enthusiastic shouts and waves he receives weekly from my son. I should probably get his autograph...

Parents of boys, I have a question for you—does this phase end? Ever?

Honestly, there could be worse things, I suppose. At least he's not obsessed with hockey...

For more rants about gender, you can read this post I wrote, "It's called a Penis." And to stick with the whole "genitals" theme, you can check out "ladyscaping for labour."