TEARS OF RAGE-FILLED LOVE AND HAPPINESS 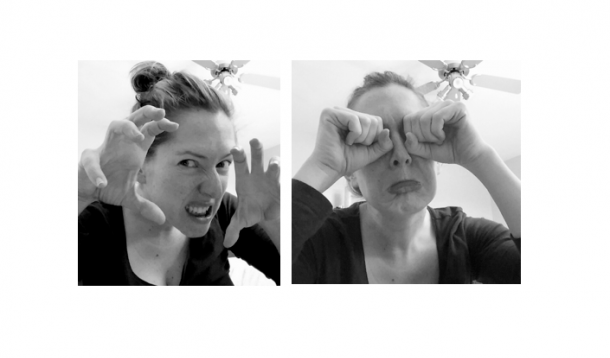 It's week two at home with baby #2, and things are going surprisingly well. Probably because I have such an involved husband, an amazing Mom who lives with us, and a pretty chilled out newborn. Cole has also been adjusting incredibly well, though he needs more Mom snuggles these days. Our greatest fear right now is that he'll accidentally headbutt Maeve's soft spot or poke her eyeball out while trying to give her some toddler "love."

"Look! Dat guy eyes open!"  *Poke* Yes, Cole calles Maeve "That Guy!" Because she has short hair, clearly she is a he. For the record, my Mom is also a boy.

Yet despite this relatively easy transition, due to all of the support that surrounds me, there is one thing that all the help in the world can't change—postpartum hormones.

From what I remember last time, there are two phases. First is the CRY EVERY DAY AT DINNER PHASE. I remember with Cole, this happened daily for the first two weeks. Salty tears would literally roll down my cheeks and land in my spaghetti. And again with Maeve I've found the same thing is happening—when the sun goes down, my emotions kick into high gear. I feel overwhelmed, but mostly with love. I find myself crying, not because I'm sad, but because I feel like my heart could explode at any minute. I worry about anything and everything that could happen to my babies. I feel such a maternal mama bear instinct to protect them, yet I feel vulnerable because I know I can't protect them from everything.

I know from experience that these feelings will pass, and already the happy tears have subsided considerably, and we are entering the RAGE AT YOUR HUSBAND FOR NO REASON PHASE.

Oh my poor poor husband. I almost feel sorry for him. He's such a trooper. Truthfully, I'm a pretty emotionally stable person 95% of the time. But lack of sleep and postpartum hormones can change a person.

Here is a list of things that my husband has done in the last 48 hours that have caused me to snap on him.

He farted. I was breastfeeding while sitting on the couch and he let one rip. And then I raged. His farts always make me rage, but to leave me trapped on the couch with nowhere to escape pushed me over the edge. My eyes turned into hot laser beams and I screamed at him, "Why must you shit yourself and leave me here to die in your fumes? What is wrong with you? Do you have a dead animal rotting up your asshole?" He tried very hard to contain his laughter, but couldn't. Eventually, I was laughing too, but it was still a rage-filled laugh.

He closed the fridge door while I was in the fridge getting something. "What is wrong with you?" I scowled. "Ask me to move next time, don't just shut the door on me!" Aghhhh. I was highly annoyed and thought we should probably get a divorce. I mean, who does that?!?

He bumped my leg while sitting down on the couch. "AGHHHH!" I screamed, irritated beyond belief. "I'm feeding Maeve, be careful! Why can't you be more graceful?" Yes, I actually used the word "graceful."

As you can see from the instances above, my husband is clearly the biggest asshole on the planet. Why do I even put up with this shit, right?

But, my friends, this is what hormones can do to you, and I'm going to play that card as long as I can. I just gave birth to a human and pushed her out of my vagina. I'm a feeding machine 95% of the time, and I get little sleep. You can't expect me to be rational right now. And luckily, my husband doesn't.

But on those days that I don't feel great and I haven't showered? Just shut up and deal with it!

If you'd like to read more of my feisty posts, check out "Shit People Say To Pregnant Women" and "The Pregnancy Rage Hormone."