New Ways to Soothe My Sleepless Son to Sleep 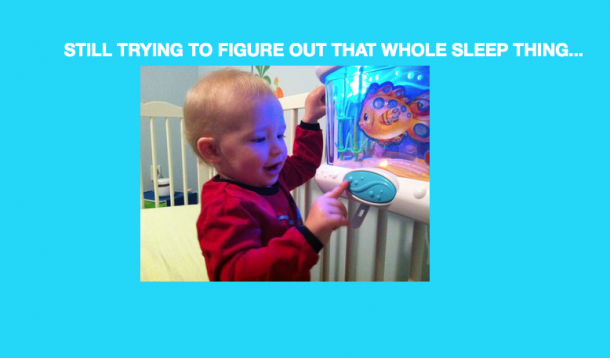 Hello. It's me again. The mom whose son still doesn't sleep very well at night. He's 13 months old. I'm at the point that I want to scream whenever parents complain that their 3-week-old baby that wakes up every 2-3 hours.

Nothing seems to consistently work.

If you told me that angling his bed to the northwest corner, and putting him in red PJs would make him sleep, I'd re-arrange his furniture and buy him an entirely red wardrobe. I'm that desperate.

I have, however, added something new to our bedtime routine which has helped soothe him at nighttime. It's the Fisher-Price Ocean Wonders Aquarium, one of the Fisher-Price Favourites. If you haven't seen it — here is what it looks like: 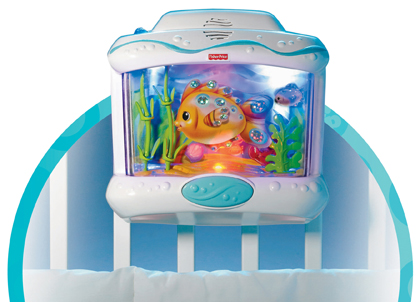 It has three different settings (music, lights, music & lights) and three different volume levels. Cole finds it fascinating and loves watching the fish swim back and forth in the bubbles.

When it's bedtime, I put him in his crib (in an already dozy / nearly sleeping state) and set the music to play for 18 consecutive minutes. Then I carefully tip-toe out of his room. The aquarium comes with a remote so if he's still stirring after the music is done I can press play again without risking the creaky walk across his bedroom floor to press the button. It's awesome.

Now if only their next model came with extendable arms that could also reach out and rock the baby back to sleep. Hmmm. Something to consider... But that might also be creepy.

Okay, that's it for me tonight. If you need me — I'll be sleeping by 9pm, and awake again by midnight...

I'll just remind myself of something my friend Kevan told me, "There are worse things in the world than waking in the middle of the night to hold your child." So. True.