Does Everything Make You Cry?

ME NEITHER. SERIOUSLY. I'M NOT LYING. I'M AN EMOTIONLESS ROCK. 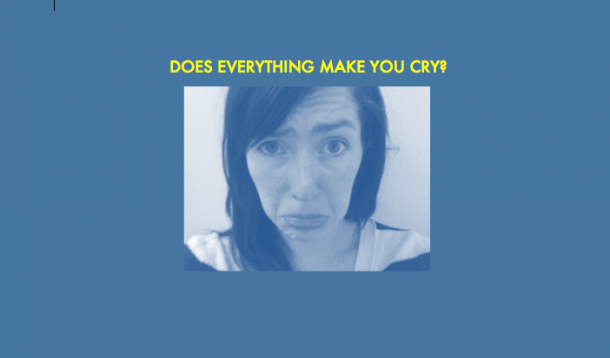 Question for you parents: Now that you have offspring, do you cry your face off all the time? At everything even remotely heart-warming?

"Look! Puppies in a toilet paper commercial! They just slid into a giant wall of toilet paper rolls."
*bawl bawl bawl*
"Look! A little boy reached up for his mother's hand to cross the street."
*bawl bawl bawl*
Okay, maybe these aren't real examples, but they're pretty freaking close. These days, I feel like just about anything makes me cry. Being away from my son for a full work day is taking it's toll on my heart.
My poor little achy breaky heart *cue music*
In all fairness, the Universe was against me the other day. It was slapping me in the tear-streaked face, just to see how much I could take.
Picture this:
I'm at work, watching an episode of Adventure Time (for work, by the way. I wasn't just slacking on my first week back...) and in this particular episode, Finn (the human) and Jake (the talking dog) find a baby robot creature that they lovingly nickname The Jiggler. They take him home, and spend the day dancing and playing with The Jiggler. Finally, it's bedtime, and they go to put the Jiggler to bed. Finn whistles. The baby robot whistles.
I start to get teary eyed.
It reminds me of my son. He loves to whistle. And the cute little bald robot head reminded me of my son's perfectly shaped and adorable head. I desperately wanted to kiss it.
I bit my quivering lip, and continued to watch the episode. As it went on, the baby robot started to get sick and became lifeless. He couldn't whistle anymore. He was dying and they realized they needed to find his mother.
Side Note: WHAT KIND OF CHILDREN'S SHOW IS THIS?!? I WANT LOLLYPOPS AND RAINBOWS AND UNICORNS (which this show is normally full of)...
Anyway, once re-united with his mother, The Jiggler's colour came back, he began to whistle and the mother wrapped her robot arms around her son and tenderly kissed his forehead.
I absolutely could not take it anymore. I couldn't watch the rest of the episode. In fact—I skipped through the majority of the "dying robot" part of the episode. My heart was an aching, palpitating mess.
I don't know how I managed to hold it together. I thought for sure at any moment the fountain of tears would start, giving me that mascara streaked cheap hooker look that is always so flattering... (no offense to any cheap hookers who are reading this blog. You totally rock the look. It just doesn't work for me. I'm too straight edged, y'know?)
*sigh*
I guess I'll just have to avoid watching anything that deals with relationships...or has cute animals...or soft music.
UFC it is. This mama needs to TOUGHEN UP!
*smacks self in the chest*
*cries because she smacked herself too hard*
I can't win.
Category:
Family - Mummy
Tags:
mom
back to work
working mom
emotions
emotional
adventure time
finn
jake
the jiggler
comedy
jen warman