A PARTY FOR EVERYONE TO REMEMBER. EXCEPT THE BIRTHDAY KID. 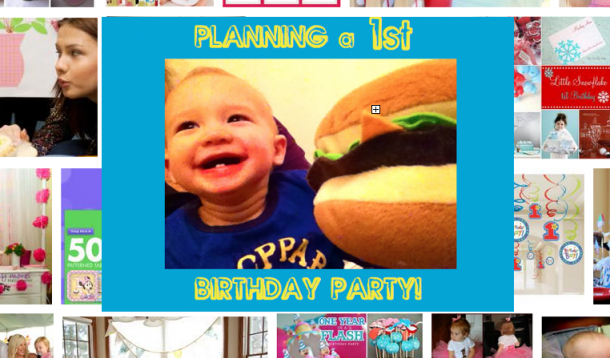 "So what's the deal with first birthday parties anyway?"

Seriously. Why do parents go SO CRAZY over FIRST BIRTHDAY PARTIES? I honestly don't get it. Yes, the first year is a huge milestone—and so much HAPPENS during that year, yes. But why oh why do we have such elaborate and crazy parties for our babies?

From smash cake photo sessions to custom made birthday cakes, it blows my mind how much time, effort, and money some parents (most parents) put into the first birthday party. A party that the birthday kid won't even remember.

If you want to throw your one-year-old a party that is truly for HIM, here is what I think you should do to celebrate his special day:

When your one-year-old wakes up, allow him to smack you in the face for about ten minutes. He'll think this is hilarious. For breakfast on this special day, just give him a tub of yogurt and let him go to town. No spoon. No bib. Just 45 minutes of pure, cool, mushy-messy-yogurty-bliss.

After breakfast, let your one-year-old run around the house naked. If you have a little boy, he'll thoroughly enjoy all of this "play with my penis" naked time. "This is the BEST BIRTHDAY EVER! And it's not even noon!"

If you really feel like spoiling your kid, wrap up a dozen or so empty boxes. After he wakes up from their afternoon nap, let him have a present opening party. He'll shit himself with excitement (maybe literally) as he tears open box after box. And guess what? He'll be ecstatic to find that there isn't anything in the boxes! Woo Hoo! Empty boxes are the best! You can climb inside of them, and you can entice the cat to jump in them (and then spend 20 minutes being entertained by the cat in the box). I'm telling you: Leap Frog and Baby Einstein toys have NOTHING on empty boxes! If you really want to jazz things up—throw some tissue paper in the box. Because the only thing better than ripping paper OFF of a box, is pulling paper OUT of a box!!!

Holy crap, it's already dinner time. Your one-year-old's head is probably ready to explode: BEST DAY OF MY LIFE SO FAR!!!

And if you really want to end things with a bang, you can skip the specialty cake with handmade fondant animals—because do you want to know what your one-year-old really, truly wants to eat more than anything in the entire world? Your one-year-old has been trying to get at this for months now, and although he's come close (and have maybe already had a taste)...your one-year-old would desperately love an entire bowl...of dog food.

Now THAT, ladies and gentlemen, is how you throw a birthday party that is truly for a one-year-old!!!

With that said...I'm a total and absolute hypocrite. We've invited 80+ people to Cole's first birthday party, and here is the cake I plan on baking for his party (I know what you're thinking "a burger cake? wtf?") But if you saw Cole's Halloween costume (he was Coleslaw) you'll understand: we're not a typical family over here at the Warmberger (Warman + Schlumberger = Warmberger) residence. And...we like to party. So. We're goin' big with this one. Woo Hoo!

Now tell me, did you throw your one-year-old an over-the-top party? (Please say yes, and don't make me feel bad)