Why Are You F'ing with the F-Bomb?

It's Time To Stop The Abuse Of This Classic Cuss

Why Are You F'ing with the F-Bomb? 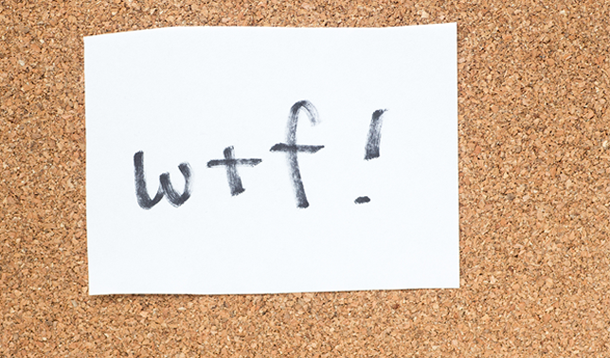 Lately, I've been seeing our old friend the F-bomb around town a lot more. By town, I mean online and even in print.

I have mixed feelings about this.

Don't get me wrong, I am a frequent user of the F-bomb, much to my parents' chagrin (sorry mom and dad—yes, you DID raise me better than that). It's such a versatile word, isn't it? It can take on any grammatical form you wish—noun, verb, adverb, adjective. I have no issue conceptually with the use of the F-bomb.

But I do firmly believe it's suffering from a little thing media types refer to as overexposure.

What I'm noticing is that the good ol' F-bomb is losing that little thrill of bad-ass it used to have. Remember the first time you said it? Neither do I, but that's not the point. The point is that it used to carry a sense of decadence, with a little side dish of street cred—a sort of hip wickedness that only cussing could provide.

It also used to be an adults-only privilege, a secret thrill we got when we used it prematurely in our teen years. Teens today are being robbed of that sense of privilege, simply because they hear and see many of their parents or other adults dropping the F-bomb like it's a sight word in SK, and even allowing their under-18 kids to do the same.

And now it's showing up in the written word! It's being used in blog posts and even journalistic articles. It's being used by professionals and experts—no longer confined to the common man's vocabulary! Most shocking of all, it's making appearances in the *gasp!* TITLES of posts!

It feels a bit contrived to me. A bit link-baity. A bit OTT. And I love the F-bomb. Imagine what those who don't even use it—or are morally against it—must be thinking.

Perhaps, that's the conspiracy. Perhaps, there's a secret pact to overuse the F-bomb to such an extent that it no longer holds any glittery fairy dust for its previous fans. Sort of like the words golly, gee, and gosh.

I personally enjoy that little charge, that tiny thrill of knowing I'm saying a "bad" word. How "bad" will it be, though, if it's used every day, by everyone, everywhere, in every situation?

We're ruining the efficacy of the F-bomb. Much like suggestions to legalize pot, legitimizing the F-bomb into everyday speech will simply make it boring and mundane. Look what happened to alcohol—do you think the "Roaring '20s" roared because alcohol was freely available? Prohibition made booze sexy and daring and risky. Like the F-bomb used to be, before every writer out there began littering their work with it to spice up their analytics.  What's next? Peter Mansbridge telling us on the evening news about the f'ing terrorists or the f'ed up bombing that occurred? Just how far are we willing to take this, anyway?

Let's collectively agree to leave the F-bomb exactly the way it was—a perfectly inappropriate vulgar shot of shock. Let's work to preserve the sanctity of the F-bomb and keep it from becoming the Justin Bieber of vocabulary.

In other words, let's stop f-ing up the F-bomb.

RELATED: Classy Gifts for Those Who Appreciate a Well-Placed Swear