My Evolving Opinion After The Verdict Came Down 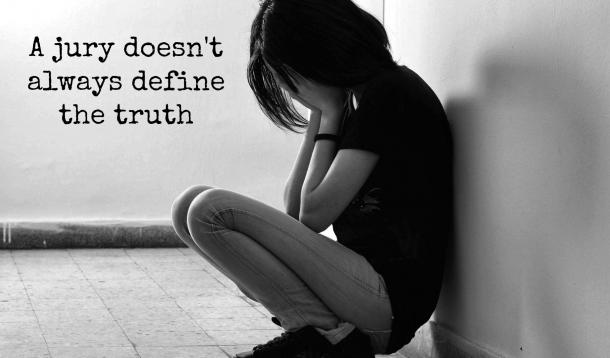 I'm ashamed to admit I had almost forgotten about her.

Most likely I had merely compartmentalized her face - and how I had become familiar with her - because it was an unpleasant experience and I didn't really want it in my mind.

The face I now recall more clearly was cute. She was small-framed and plainly dressed, without makeup or much fuss given to her hair. She sat stoically at the back of the courtroom for the four days of the trial, except when she was sitting on the witness stand, and of course, when the verdict against the accused was read.

I could see her clearly from where I sat at the front of the courtroom every day - mandated by a judge enforcing my civic duty as a jury member. This was a rape trial - back in the mid-90's, they still called it that. Civic duty or not, I hadn't wanted to be chosen for this jury, but because I was a young woman in my mid-20's near the same age as the victim, I was an ideal juror for the prosecution, I suppose.

For four days, I listened and watched. I heard the circumstances which easily described many of my weekends at the time - a bar night out, lots of alcohol, ending at a house where the partying continued after the bar closed.

Except I had never been assaulted.

The girl at the back of the courtroom? She wasn't so lucky.

It wasn't a clear-cut case, and there were some thought-provoking points raised by both sides:

What happens when consent is never given verbally - only assumed by someone's physical action? What happens if the words "No!" or "Stop!" or "Don't!" are never uttered, even if the girl is too drunk to say them or even aware of what is happening? What happens if somebody less inebriated discovers the sexual encounter in progress and labels it before the victim does?

Sadly, there were even more important questions that never got asked:

What happens when a man is not expected to take responsibility for his actions because a girl was intoxicated? What moral obligation does a man have to say "No!", "Stop!" or "Don't!" to himself? Where do we draw the line on what questions are even relevant in an assault case trial?

Forgetting those four days surprised me. At the time and for many years after, I thought it would haunt me forever because I was a member of a jury who found a suspected rapist not-guilty.

I'm not proud of that.

I could explain that there were a number of legal reasons why we, the jury, found such a verdict.

I could tell you the jury may have struggled, after having been advised that we were to find the verdict of guilty only if we were sure beyond any reasonable doubt, and "doubt" can be a very subjective term, as I learned during the trial.

I could explain to you that much of what you see on TV and in movies about being on a jury is false. I could tell you we learned information after the verdict was read that might have made it easier for us to find a verdict. We were told that information was not relevant to us and was withheld to give the defendant a "fair trial."

I wonder if that girl thinks it was a fair trial. It was complicated and painful and heart-wrenching. And I was only a juror. What I know for sure - beyond any reasonable doubt - is this: the look on that girl's face and the tears of anguish the moment our verdict was read confirmed for me everything my gut had been telling me those four days.

That girl had been assaulted. And a jury of her peers - myself included - had let her down. We had called her a liar.

I hope she reads this and accepts my apology.

She was a victim, of sexual assault and now at trial.

I avoided her gaze in the courthouse hallway, Iand  remember thinking if I was ever sexually assaulted, I would NEVER tell anyone. Why be subjected to the pain, humiliation, fear, disappointment, and disbelief I saw on that girl's face that day.

We can only combat this by talking, asking, learning.

Keep talking, in real-life and on social media. Somebody, somewhere is beginning to listen.