This Teen Got Pepper-Sprayed — In His Own Home

Are you wondering yet how the HELL this could even happen? 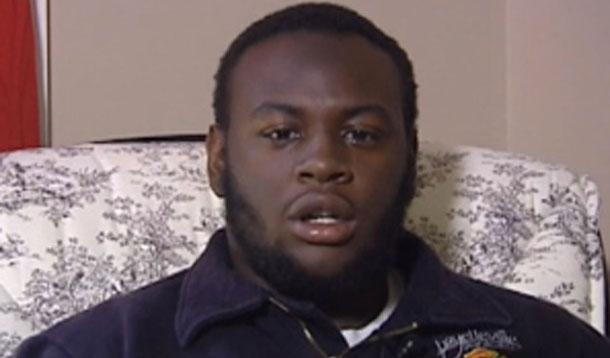 Imagine, if you will, coming home and finding the police at your residence. Your heart would start to pound, you'd run inside as fast as you could to ensure your loved ones and home are safe.

Imagine now how you would feel if you entered your home to find medical personnel treating your teenaged son because the police had pepper-sprayed him.

Keep imagining how you would feel if you then were told that your son was pepper-sprayed for the sole reason that he had entered his own home through an unlocked side door, and a neighbour, who didn't recognize him as a part of your family, had called the police to report a possible break-in.

Imagine if you asked the police why they had done this, and the response was that your son had become upset, belligerent, possibly even combative, when they questioned his presence IN HIS OWN HOME. Imagine how your son would have felt to hear those questions, along with the most damaging of all: If you live here, why isn't your picture on the mantel, like those other three kids' pictures are?

Imagine your bewilderment at how this situation escalated into a tragedy of errors - you had just moved to this neighbourhood three months earlier, you didn't know very many neighbours, they didn't recognize your son when he entered your home and simply assumed he was breaking-in and the cops made glaring incorrect assumptions about your son's belonging in your home and family, refusing to believe him because his ID still had your previous address on it, no doubt a teenager's procrastinated oversight.

Are you wondering yet how the HELL this could even happen?

It happened to DeShawn Currie, a black 18 year old, and his white foster-parents Ricky and Stacy Tyler, of Fuquay-Varina, a suburb near Raleigh, North Carolina.

Ahhh, yes, now we know how this happened. It's crystal clear, the neighbour assumed a black teen entering the side door of a white person's home must be a criminal. The police made the same assumption. They tapped in to his deepest feelings of painful segregation by pointing out his photo was not on the family mantel, thereby provoking his inner wounds — let's face it, he's obviously not in foster care at 18 because he's had an easy life of love, affection and acceptance — and then they pepper-sprayed him to control his reactive behavior.

Yet, this is what millions of black citizens live with every single day: racial profiling. It's why Treyvon Martin, Jonathan Ferrell and Michael Brown were all murdered, unarmed.

It's what parents of black sons and daughters, whether they are white or black themselves, worry about constantly.

It's also what trans-racial and interracial families fear — mistaken identity because our children don't "match" us.

The solution to this problem is obviously complex and humanity-encompassing.

In the meantime, here are a few steps I personally take to try to avoid ANYONE questioning my black daughter being a part of our home and our family:

1. I carry a copy of her adoption order in my purse with me. Everywhere. I. Go. I am trying to convince Huzbo to do the same on his smartphone — I'm pretty sure DeShawn Currie's story will persuade him.

2. I keep pictures of my daughter in my wallet, on my phone and in almost every room of my house. Until now, I had only done this out of extreme love and pride, but I see clearly now that this can also serve another purpose. I wonder if this scenario would have played out very differently if a photo of DeShawn had been sitting on that family mantel along with the Tyler's three white bio-kids?

3. When she is old enough to do so, I will ensure my daughter also carries valid ID, with her correct address and name on it, along with a copy of her adoption order. Just in case.

4. Pray, hope, keep educating myself and keep writing about it. Pray and hope that my daughter is never in a situation where mistaken identity could cause her harm. Pray for DeShawn Currie and his parents. Pray for the countless black men and women who have died or been harmed due to racial profiling. Pray and hope that police officers receive sensitivity education so that they understand that when they accuse an innocent black person of a crime for no reason other than the fact that the black person is black, then the black person is going to feel the sting of racist profiling and get upset, but the police should not be allowed to use that as justification for using undue force or violence against a black person.

Most of all, I will pray and hope that our society's laws, rules and mentalities are changed enough to one day make our world a place where my daughter and her children and grandchildren along with other black men and women don't have to worry about the racism of police, neighbours, teachers or anyone else they come in contact with.

Thanks for reading this post. You might also enjoy reading 5 ways to embrace diversity with your family, or watching this video from Lupita Nyong'o about real beauty.

Jackie Gillard: Conceived in my Heart 5 Ways You Can Teach Your Kids To Embrace Diversity