What You're Afraid To Say About The ALS #IceBucketChallenge 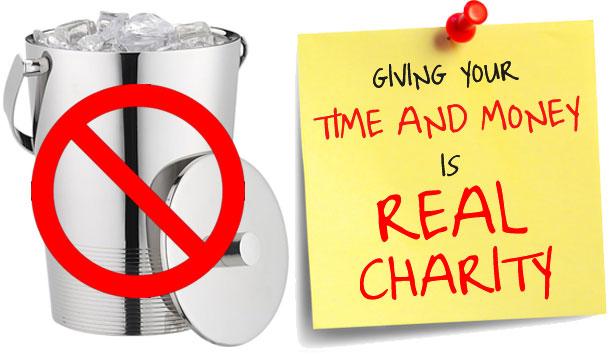 The other day on Facebook I was challenged to dump a bucket of ice water over my head or make a donation to support ALS.

I confess — I completely ignored the post. I was tired and had a million other things to do, but buried underneath these reasons was also a slight irritation that I couldn't define. I wasn't annoyed by my friend, who obviously had good intentions with her challenge, but as this ice bucket challenge has spread like soft butter on hot toast, I've come to understand more clearly what is troubling me about it.

I dislike icy water touching my head — I experienced it one January when my hair salon's water heater died — but I also really dislike being publicly baited. Even a risk as innocuous as social media ribbing feels like online coercion using my "coolness" as a prize, and I just don't think that's the best way to promote any worthy cause. Did non-athletic people like it when Maria Kang asked "What's your excuse?"

I give to charity — generously — but they are the charities of MY choice, not ones I'm pressured into giving to because of public demand to feed trendy social media slactivism campaigns.

I believe in helping others and teaching my children to do the same, as well as supporting causes that have personally touched my life, but sadly, my budget for charitable donations only extends so far. Yet every day I’m pressured to financially support a charitable cause.

Cashiers strategically request donations when our wallets are out. We have mail clogging our inboxes and mailboxes asking for our help, phone solicitation, and people at our doors during family time. We are compelled to change our profile pictures because everyone else has done so to show support for a cause. We see TV commercials with celebrities pulling our heartstrings and purse strings, not to mention our kids bringing home catalogues of "rewards" for how much money they — I — raise for a charity I didn't choose.

Aren't these charities afraid that potential donors will become overwhelmed by the perpetual marketing and not donate any funds anywhere? Aren't WE afraid that the new meaning of charity will evolve to require a mandatory self-serving element? I've read suggestions that these high-profile campaigns could actually lower financial charitable donations overall, as participants may feel the positive social media attention they receive is the payoff instead of helping a good cause, or they may give nominally to relieve unwanted social media attention but feel turned off of charitable donations entirely from being publicly called out. I've had two women I consider smart and impervious to public opinion confess to me that despite making regular private donations to support ALS, they felt pressure to donate again publicly after being ice bucket challenged, so the social media pressure works, but at what cost?

I know there are many who feel that no harm is being done with this campaign and that the ALS Association has raised both awareness and funding. They are absolutely right. If ALS is your charity of choice and meaningful to you in some way — kudos to you for showing or donating your support. However, if the latest social media charity campaign — not just the ALS one — holds no connection or meaning to you, don't jump on the bandwagon simply because it's the newest hashtag trend that will boost your social media exposure. Ten seconds of video amusement for people to "like" or "favorite" and increase your social media engagement does not constitute charity. Spending time, money or both is still what charitable organizations need most.

How do you decide which charity you want to support? Do you ever feel pressured to give?

Hi! Thanks for reading my post. If you'd like to read more, check out my thoughts on parenting labels, or my feelings about the F-bomb dropping all over the internet.

Jackie Gillard: Conceived in my Heart 8 Simple Ways To Ease Your Child's Stress About Halloween

Jackie Gillard: Conceived in my Heart What You're Afraid To Say About The ALS #IceBucketChallenge