Who Should You Cheer For During The World Cup?

Here's How We Decide In Our International Family 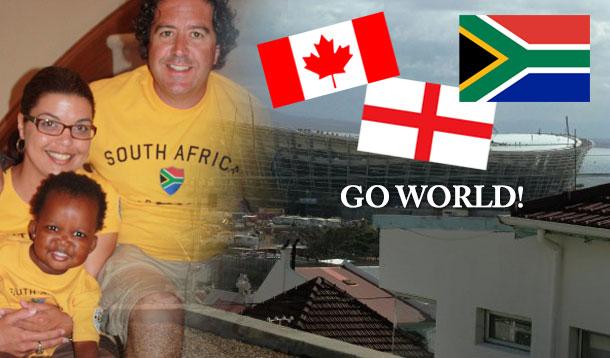 Soccer—or football, as we have learned to call it—is HUGE in our home, so you can only imagine the buzz in the air right now with the World Cup happening! Huzbo was born in England and moved to Canada as a teenager, so the passion for the sport was carried across the pond with him.

We are not a big sports family in general—either with playing or watching—but Huzbo loves watching soccer, especially when English teams are involved. He carries this birth-nation patriotism over to large international sporting events, like the Olympics or Pan-Am games, even if soccer isn't involved.

Naturally, our kids get caught up in the excitement that he generates, and I will confess to also enjoying watching soccer on the international pitch, like the current World Cup being played out in Brazil.

We are an international family, with Huzbo's birth heritage and Baby Girl's country of birth factored in.

So who do we cheer for?

Huzbo was born British and feels a deep loyalty towards their competitive soccer athletes, but he does cheer for Canada during the Olympics; however, we both encourage Baby Girl to always cheer for her country of birth in any sport or match that they are playing, and we cheer right along with her.

We cannot simply remove that vital part of who she is, erase it with the paperwork that granted her citizenship to Canada, nor would we ever want to. She is Canadian by our doing—not her own. She was born in South Africa and that is an integral component of who she is, more so than her Canadian residency and citizenship. We don't ever want her to feel that South Africa is simply her birthplace—it runs much deeper than that, and when we adopted her, we agreed to do as much as we could to instill a sense of pride for her beloved South Africa. This is not always easy, for obvious reasons.

So, we cheer for South African athletes whenever they are competing, and not only for Baby Girl's sake. We have come to consider South Africa as the country that helped us form the beautiful family we have. It helps that we also happen to love the many incredible features of the country itself, including the incredible people we met while travelling there.

The last World Cup was easy—it was HELD in South Africa! We had been in South Africa adopting Baby Girl when the building of the soccer stadiums was going on, eight months prior to the 2010 World Cup. We had awoken every morning during our week in Cape Town to watch the stadium there taking shape from our rented flat overlooking the construction of that venue. Needless to say, Huzbo was a little disappointed that our adoption didn't coincide with the actual World Cup in South Africa!

Sadly, South Africa did not qualify for this year's World Cup, but we will cheer for the other African nations that did, as well as Huzbo's England and my own personal favourite—Italy.

Recently on a holiday in the Caribbean, our daughter participated in some children's shows on stage at the resort we stayed at. Each child was introduced and asked where they came from, and Baby Girl proudly told the audience, "South Africa," with no hesitation. It caused a number of vacationers there to ask us how long it took us to fly there from South Africa, but we didn't mind the explanation required—we were proud of our daughter's pride in her heritage and hope that our four years of cheering for South African athletes have contributed to her pride.

I tried yesterday to get Baby Girl to tease her dad a little about Italy's defeat of England in their first match, and also tried to convince her to kid with him that she was only going to cheer for African teams, but she was having none of it.

When I asked her who she wanted to cheer for, she answered:

"We should be cheering for ALL the teams, mommy. They are all trying hard and doing their best and ALL the countries should be friends no matter who wins or loses."

I am once again the student of my daughter's brilliant insights.