My Tribute to The Talented Writer 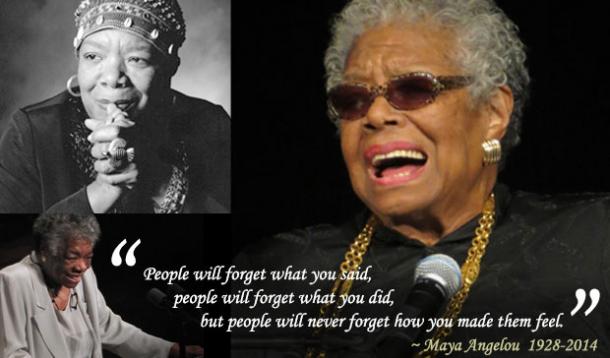 My introduction to Dr. Maya Angelou came late in life. I was 34 years old and going through a hard time watching my first marriage crumble. I had discussed my emotional state with a good friend, and the day after we talked, I received an email from her with the subject line "Phenomenal Woman." I almost didn't open it, thinking the last thing I needed at that moment was to bust up my pity-party-for-one with some joke or article about other women who were far more fantastic than I felt at that moment.

Thankfully, I didn't listen to my inner pessimist. Not only did the email contain a beautifully supportive message from my friend telling me that she felt the poem she had included was all about me, but it also provided an introduction to the power of one of the most gifted writers I have come to love and respect — Maya Angelou.

Pretty women wonder where my secret lies.
I'm not cute or built to suit a fashion model's size
But when I start to tell them,
They think I'm telling lies.
I say,
It's in the reach of my arms
The span of my hips,
The stride of my step,
The curl of my lips.
I'm a woman
Phenomenally.
Phenomenal woman,
That's me.

I walk into a room
Just as cool as you please,
And to a man,
The fellows stand or
Fall down on their knees.
Then they swarm around me,
A hive of honey bees.
I say,
It's the fire in my eyes,
And the flash of my teeth,
The swing in my waist,
And the joy in my feet.
I'm a woman
Phenomenally.
Phenomenal woman,
That's me.

Men themselves have wondered
What they see in me.
They try so much
But they can't touch
My inner mystery.
When I try to show them
They say they still can't see.
I say,
It's in the arch of my back,
The sun of my smile,
The ride of my breasts,
The grace of my style.
I'm a woman

Now you understand
Just why my head's not bowed.
I don't shout or jump about
Or have to talk real loud.
When you see me passing
It ought to make you proud.
I say,
It's in the click of my heels,
The bend of my hair,
the palm of my hand,
The need of my care,
'Cause I'm a woman
Phenomenally.
Phenomenal woman,
That's me.

The poem resonated so greatly with me that I began to learn about the author's life of tragically humble beginnings with sexual abuse and a refusal to speak for many years. Her tragedies grew into triumphant accomplishments such as being one of the first female black screenplay writers and biography authors as well as working with both Malcolm X and Martin Luther King on the civil rights movement. She paved the way for abused women to find healing through writing about their experiences, as she was one of the first to do so at the time in her original in a series of memoirs "I Know Why The Caged Bird Sings." Her words are often so moving that to this day, I will re-read that poem when I'm feeling uninspired, unattractive or unintelligent — it has become my healing balm of phenomenal words.

Maya Angelou's life wasn't always an easy one, but she often spoke and wrote about the benefits of facilitating personal change and keeping a positive attitude no matter what your circumstances. She was not a woman given to self-pity or self-doubt, which is what so many of her fans, including myself, were drawn to. Listening to her speak, or sing, was a privilege. Her voice — deep and rich with the knowledge she gained from her life experiences — resonated with a timbre of serious but playful, intellectual yet approachable and loving with no-nonsense strict.

I often envied Oprah Winfrey's close friendship with her and likened Dr. Angelou to a fabulous auntie or grandmother, giving the gift of her wisdom to those who took away her words and thought about them carefully, searching for the hidden gems buried beneath what sometimes appeared as simple and straightforward prose.

Hollywood director John Singleton, who featured one of Maya Angelou's poems and a cameo appearance from her in his movie Poetic Justice, calls her a griot — the term for a traditional West African storyteller who is often looked upon as a sort of societal leader or advisor. I can't think of a better description, so of course it was only natural that I would introduce this phenomenal woman early on to my own phenomenal woman in-training — my daughter.

Among her many creative talents, Dr. Angelou wrote a children's book called "My Painted House, My Friendly Chicken and Me." Combined with eye-candy photographs by Margaret Courtney-Clarke, the book provides a visual feast and engaging story of what life is like for a young South African girl from the Ndebele nation of people who are famous for their incredibly painted houses and multiple layers of neck and leg rings. No doubt the book was intended as a cultural learning experience for North American and European societies, but in her incredible way, Maya Angelou continued her gifts to me by presenting my daughter with a piece of her cultural identity through this book.

My daughter is not of the Ndebele nation of people, but the book provides her with so many things that she lost through adoption — pictures (not drawings) of girls her age that live in her country of birth, a glimpse into some of the original people of her home country and an interest in the incredible mosaic of artistic talent that South Africa holds, just to name a few. It's no surprise that my daughter adores this book, and I only wish Dr. Angelou had written more children's books. It is a fun, interesting, thoughtful, cheeky, intelligent sharing of a culture — an embodiment of Dr. Maya Angelou herself.

As sure as I am that she will be missed by many, I have no doubt that the creative legends of Maya Angelou and her work will live on for many years, as it should.

She was, after all, a phenomenal woman.

Thanks for reading my post! If you'd like to read about another phenomenal inspiration, check out my tribute to Nelson Mandela, or grab a kleenex and check out the words of wisdom in this heartwarming video.