A New Approach To A Very Old Problem 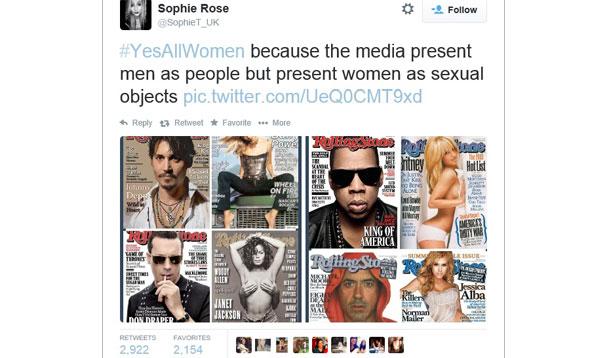 Yesterday I came across the #YesAllWomen movement. At that point I had only vaguely heard about the stabbing/shooting that motivated it, so I was unclear on all the details. I began to read everything I could to learn about the origin of the hashtag that has now become a worldwide phenomena after trending for two days, and the sad existence of Elliot Roberts, 22, and his YouTube diary of shame and blame towards women that led him to stab three men and shoot four women before turning the gun on himself.

I started to read the tweets tagged with #YesAllWomen and found myself mesmerized, nodding and mentally saying "Uh huh. Oh yes. Been there." to almost every one of them, despite the absence of any sexual assault in my own life. 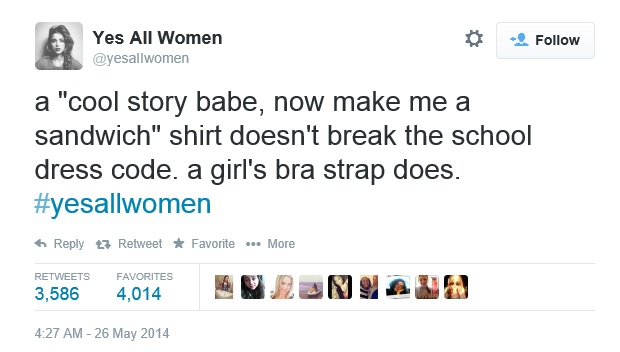 That in itself was proof of the hashtag's message — that ALL women have been shamed, blamed, persecuted, belittled, judged, held back, sexualized, put down, or let down at some point in our lives, simply because of their gender and generations-old, socially-accepted norms that are prejudiced against women. 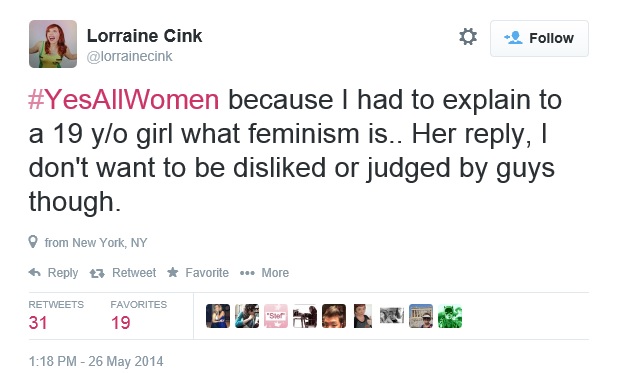 In addition to the tweets that I immediately identified with, there were even more that made me think: "Wow. I never even thought of THAT!" which exemplifies how subtly ingrained and how pervasive this problem really is.

The more I read, the more I felt sad and mad. Almost all of the posts resonated with me. Well, not the ones from the people tweeting about how "not all men are bad" — the hashtag was not created as a smear campaign against men or a rocket-launcher for some non-existent feminist agenda. 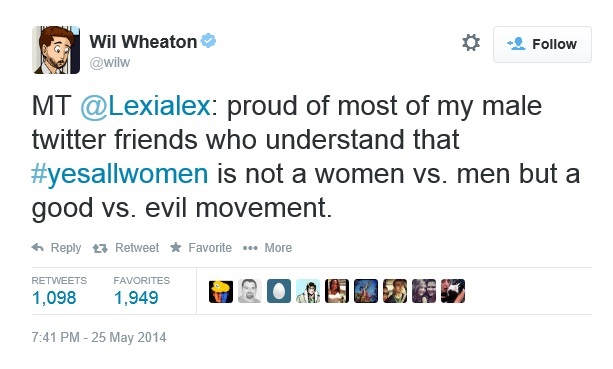 I tweeted a few statements of my own, and I know that education is power and anyone reading the hashtag stream was benefiting, but I felt useless and powerless — a victim of armchair slactivism. 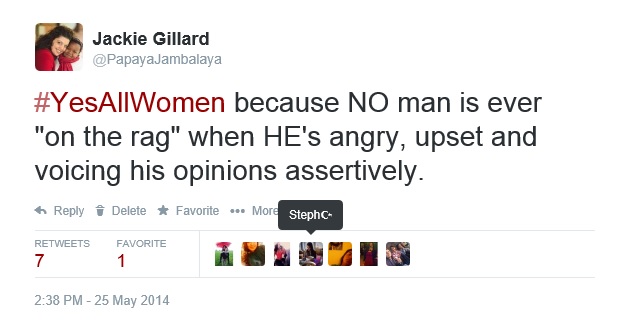 Then it hit me — the search for a solution to this problem does not lie in what we tell our girls - to dress "appropriately" or to not walk alone in the dark — this problem is really about what we DON'T tell our BOYS — we don't educate our boys properly about how to treat girls and women and we certainly don't teach them empathy for what females deal with on an hourly basis. I am guilty of this as much as anyone else — I have a stepson living right under my nose, and I had been focusing all of my energies on teaching my young daughter how to stay safe — how to kick a man in the goolies if he tries to grab her, how to scream "Fire!" instead of help because nobody wants to get involved if someone is screaming for help. These lessons cannot be tossed out of our daughters' educations just yet, but I needed to expand my curriculum to the male half of my home-school.

When dinner was finished, I asked my stepson to Google the hashtag #YesAllWomen and read it while I put my daughter to bed and finished folding laundry. Yes, feminists can fold laundry and still be feminists. Then I sat with him to talk about what he had read. We talked about the sad personal experiences of assault and abuse that women shared in the thread of tweets, we talked about how that is a big reason why women live in so much more fear than men do, we talked about what kind of man he wants to be when he grows up, we talked about dating girls and what girls are "obligated" to give him — NOTHING — no matter how much he spends on the date or how charming he thinks he is. We talked about what "no-means-no" means and we talked about what can happen when alcohol is involved. We talked about the tragedy of Retaeh Parsons and how we knew he was not capable of doing what those boys did to her, but that we also expected him to do something to help a girl if he was ever in a situation where a girl was being disrespected or assaulted by others.

The conversation was uncomfortable, I won't lie. It made both of us squirm at different points — not so easy to chat with your 13-year-old stepson about making out with a girl and him wanting to take it to the next level, but it was important and we both knew it, so he didn't ask me to stop out of embarrassment, and I said everything that I thought needed to be said. 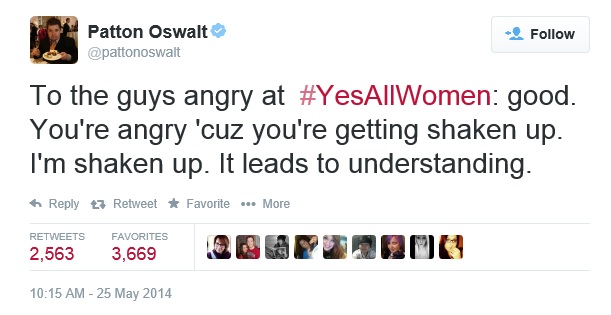 My stepson understood most of the tweets and the deeper societal problem they represented. He agreed that he was definitely not the kind of guy who would ever hurt or disrespect a girl, but he also admitted that he had never considered much of what he read and that a lot of it made him feel sad for women. I know he will think more about our conversation over time and I'm sure we will have further discussions about what it means to be both a man and a woman.

I don't think my stepson is capable of any kind of assault or intended disrespect to a female, on any level, but sadly, I bet the parents of many boys and men who have hurt girls thought they didn't need to have that kind of conversation with their sons, either. The whole point of the #YesAllWomen is to raise a higher degree of awareness and while my stepson may only be one teen-aged boy — it has to start somewhere.

I hope every parent of a boy has a similar conversation with their son — we need a new approach to an age-old problem. 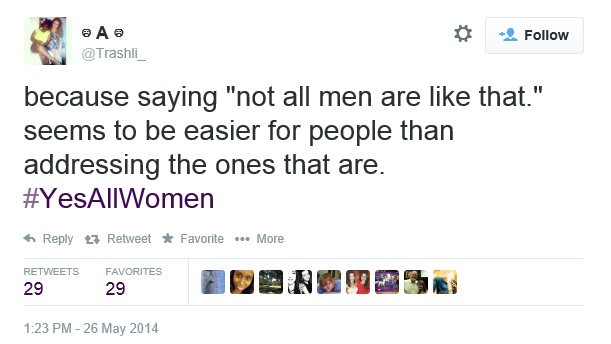 Read our dad blogger Joe's take on this: #YesAllMen Should Care About #YesAllWomen