Sometimes When a Marriage Ends, So Does Your Sanity . . . 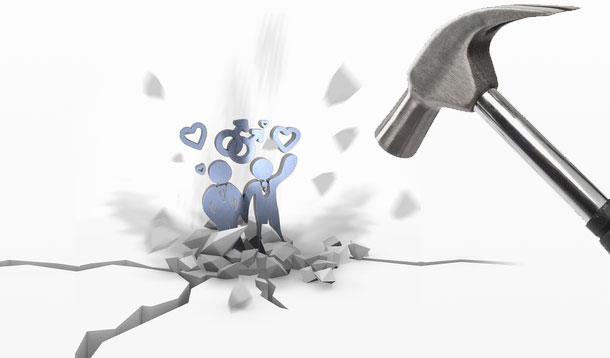 The most recent focus on divorce, via Gwyneth Paltrow, reminded me once again of my own divorce that happened almost ten years ago. It's funny how easily you forget the details as time trudges on, isn't it?

I was asked a couple of months ago to appear on Huffington Post Live.  When I inquired about the topic of discussion, the response was: "The moment you knew."

As in the moment I knew my first marriage was over.

I haven't written much about the demise of my first marriage, and I had forgotten that months earlier, when @HuffPostDivorce tweeted a question about how I knew it was over, I had responded with some brutal honesty: 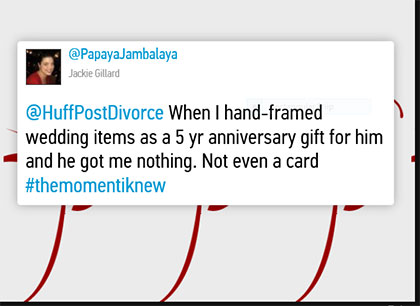 What this tweet didn't say was that after five painful years, we had just started seeing a new marriage counsellor in a final attempt to salvage a marriage that had started to derail almost before it began. Oh, we had seen a counsellor previously, but my ex didn't like her, didn't like her exploration of his childhood or his family's impact on his adult persona. So, I searched out a male therapist to appeal to his misogynistic tendencies. The first session had gone well, or so I thought at least, and I was full of new-found hope for the survival and reconstruction of our relationship, when I had previously thought there was nothing left to hope for.

Under the illusion of this hope, I dug out some items that were symbolic of our wedding—the invitation and our "crowns" (it was a Greek wedding, but not the big, fat kind), bought a shadow box frame, and set about glue-gunning the wedding souvenirs into a sentimental display. On our five-year anniversary, I presented the gift, along with the difficult-to-find anniversary card expressing (in a nicer way) my message of "I can't stand you right now, but I'm willing to make one last effort to change that, so Happy Anniversary."

He was touched. More by the gift than the card, obviously, but he genuinely was, I could tell. He even had a tear in his eye, although I can't say for sure if it was because of my gift, or because he knew he was on the cusp of becoming a single man again.

When he looked up at me and told me he had nothing for me, it was that moment—#themomentIknew.

I began to cry. I'm not sure exactly what he said, but it was something about how he thought I was making a big deal out of nothing, because our marriage was not in any condition to be celebrating it.

Perhaps he was right—it wasn't in any condition warranting a celebration—but my gift wasn't celebrating what we had at that moment, it was a reminder of what our marriage used to be when we created it, what we had wanted it to be when we started out, and where I was hoping it could be if we were both committed to working on improving it.

I didn't want the material gain of an anniversary present or card, I wanted the sentiment. I wanted the metaphor, but not the door slammed in my face metaphor that I received, naively thinking that he was feeling all the same optimism as I had been after our counsellor's appointment.

Now, the next part I'm not proud of, and I have to say, it's the reason why I wasn't really comfortable discussing this episode in a live webcast that could potentially portray me more as a deranged psychotic than the wounded, emotionally-drained, and completely lost soul that I was when it happened.

My torrent of gigantic emotions somehow pushed me over the waterfall of rational thought momentarily. Five years of disappointment, suppressed anger, oppressed expression, repressed sexuality, depressed emotions, all rushed me like I was a dude trying to outrun the bull through Pamplona. I grabbed a hammer and proceeded to smash the shit out of the shadow box gift.

What provoked this aggressive act from a non-violent woman? Rage, obviously. Shame, at having been the fool for my romanticized delusions about the state of our union. Utter frustration that I was once again confronted with our unbridgeable differences, and, I can't deny, the quest for revenge—I knew he had liked my gift, so I wanted to hurt him back by destroying it. Perhaps I was even primal enough at that moment to be imagining my swings landing against him.

Whatever the reasons were, as I sat winding down my ugly-cry and surveying the destruction I had caused, I knew it was over. I knew that if a relationship was pushing me to act so out of character, it was time to go find peace.

A month later, as I packed up my belongings to leave both our house and our marriage for the last time, I found that brutalized shadow box where he must have put it, on a shelf in the basement workroom.

I felt more than a little embarrassed by my actions, yet I wasn't sorry I had done it, and my lack of regret confirmed for me that I had finally made the right decision to move towards a happiness that didn't require so much effort.

Thanks for reading my post! If you'd like to read more interesting stories, try this one about defining the role of stepparents, or this one about the loss of parenting power after a divorce.