Black History Month: The Lessons Of The Black Angel

Why Lessons in Diversity and cultural heritage Are Important 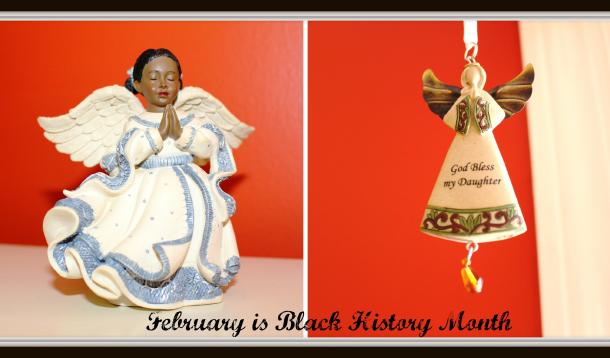 During a visit to my parents, my mom presented Baby Girl with a little gift from one of my aunts. My daughter eagerly opened the bag and unwrapped an angelic little girl figurine.

My aunt had spotted the girl and thought of my daughter, no doubt because my mom and her sister both refer to my daughter as "a little angel," but also because the angel has black skin, and you don't really see many black angel images in retail. My mother and I made the appropriate oohs and aahs, but one look at Baby Girl's face and I knew she didn't like the gift. And I knew why. A mother knows her child.

I asked Baby Girl if she liked it, and she responded that she did, but a mother knows her child. Her huge infectious grin with shining eyes were missing, and her usual dramatic proclamation of her LOVE of the gift was also conspicuously absent. I didn't push the subject, though. I didn't want to discuss it with her until we were alone and she could be honest with me, without worrying that she would offend anyone.

I mentioned to my mother when Baby Girl was in another room that I didn't think she liked the angel. My mother scoffed at my statement and pointed out that my daughter had indeed said she liked it when I asked her. That was enough for my mom, but a mother knows her child.

As we settled into our drive home, I casually asked Baby Girl again if she liked her angel. She again said that she did, but she definitely was not trying as hard as she had in front of my mom to make me believe her.  I told her that I was sensing that she was bothered by something and that perhaps she didn't like the angel,  and that it was ok if she didn't. Immediately, Baby Girl admitted her dislike of the gift. I inquired why, but she was still hesitant to tell me, saying only that it made her feel "embarrassed" — which is her catch-all feeling word for any negative emotion. I asked a few times in a few different ways until finally she confessed:

I don't like the angel because it's black. Angels are supposed to be white. There is no such thing as a black angel.

For the thousandth time since we adopted her.

In a world where she is already painfully aware that she doesn't match her family, the gift was simply another reminder to her that she didn't look the same as those around her — or even those in a whole other universe. Receiving the gift of a black angel went against her belief that all angels were white, because up until she opened that gift, she had never seen a black angel.

The racism of this fact stunned me and hurt me. What a horrible, untrue message — that only white people could become angels!

The other realization that it was MY fault that she had never seen an image of a black angel made my cheeks burn with shame and guilt. I felt as though I had failed at one of my most important jobs as her mother, ensuring that she had pride in her own racial identity with a supported love of racial diversity.

I explained to her that black angels did indeed exist, despite the fact that she had never seen a picture or image of one.  n fact, angels of ALL shapes, sizes and colours existed because angels were actually people that had gone to Heaven, according to Christian beliefs. She didn't argue my explanation, yet I could not convince her to find peace with the black angel.

I ushered her upstairs, wondering what to do with the black angel that she didn't want to look at. Should I keep it on her bureau where I had set it, to help remind her that angels can indeed be black? Should I put it away and try to gently convince her to accept it and bring it out if she arrived at that point? Should I put it elsewhere in the house and just forget about it? I didn't want to encourage her conviction that all angels are white, yet I also didn't want to force something on her that she found upsetting.

As has sometimes been the case with mothering a black child as a white woman, I was lost. Torn between my responsibility to respect and honour her racial heritage and my desire to respect her individual preferences as a human, regardless of her race. I didn't know what to do.

Until I walked into her room and had a flash of "divine" inspiration. There, hanging from her window topper, was another angel who had always watched over Baby Girl.  It  had been given to us right before we travel led to adopt our daughter, and her white-ness gave me an idea.

She could sleep peacefully, surrounded by the love of her two families.

The genuine grin on her face as she snuggled into her covers said it all. This was an explanation she could hold on to peacefully, with love and acceptance.

Yes, a mother does know her child, even if she is teaching me along the way.

February is Black History Month.  Let's teach ALL of our children the importance of our diverse racial and cultural heritage. Please take some time this month to participate in a Black History Month event.  Speak to your children about world black history, read books together about diversity and teach them not only with your words — but with your actions — to love and respect all people.

If you liked this post, you might like Why Aren't There More Stepfamilies On TV And In Movies? and Are Parenting Problems Simply Part Of The Job?