Gifts That Represent Your Child's Race or Culture

Why They Are Important and How I Struggle to Find Them 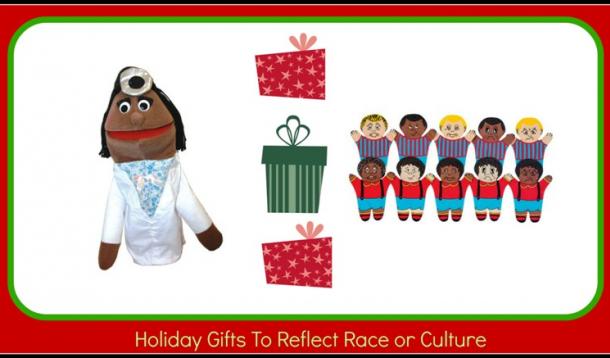 It's THAT time of year again.  Yes, Christmas!  The time of year when I scurry around the internet buying gifts for our children that are useful, fun and educational.  While also trying to teach them to not be greedy for too many presents.  Sometimes I even manage to squeeze in a little bit of Christian education about why Christmas even came to exist, like when Baby Girl really was a baby of eighteen months and just learning to speak, I kept telling her Christmas was to celebrate the birthday of Baby Jesus.  When my parents came to visit, I proudly asked Baby Girl to tell them whose birthday we were celebrating at Christmas and she just as proudly answered "Baby Cheetahs!"

Our first Christmas with her was simple — every toy ever made that had any link to speech development was under our tree.  Baby Girl did not speak a word when we adopted her, in any language.  It was a mission of mine to get her speech up and running as quickly as possible.  I worked hard at it, and the work paid off — partly due to my gift-giving with a purpose that first Christmas.

Our second Christmas with our daughter, her speech had fully developed, so my gift-giving took on a new theme — adoption.

Again, I scoured the world-wide-web searching high and low for anything — something? — that was adoption-related.  We already conversed regularly with Baby Girl  about adoption  — as much as you can have "conversations" with a two year old! — but we wanted some play-item reinforcement of those chats. There are quite a few adoption-themed books available for children, but even the most literary child wants more than a pile of books for Christmas, especially at age two!  The task of finding toys or items other than books that were related to adoption was so challenging that we ended up buying some adoption books and then also buying some toys that represented our daughter's appearance. On that particular year, there seemed to be a bevy of toys available for that purpose.  We bought a group of black children hand puppets, each one with a different facial expression representing different emotions - also fabulous for teaching children who were adopted to read non-verbal communication, as this can sometimes be a challenge for them!  We also found another puppet — this one a black female doctor — that satisfied our need for a toy that looked like our child, but also provided a positive black female role model.  I was proud of our meaningful gifts, and she still plays with them now.

Last year, our search was not so fruitful — it seemed as though the well had dried up and even the toys that I had purchased the year prior were no longer available.  What was going on?  Were toy manufacturers suddenly forgetting that black children also want toys that look like them?   I went looking outside of the internet and inside stores and found next-to-nothing of toys that represented my daughter's race in appearance.   I was sad and angry.  I even phoned the manager of a local store and complained that in a community as diverse as the one I live in, I was disappointed that there was not better representation of that diversity in the toys being sold at this particular retailer.  He listened politely and said they would consider my comments in their future buying of stock, but ultimately, it was too late for the Christmas rush.

I finally ended up finding, completely by chance, a doll created in the image of a young Ethiopian girl.  It was a fairly decent likeness, not like many "black" dolls that are simply white-featured dolls in various shades of brown instead of peach. The doll's manufacturer contributed a portion of its sale to a charity for girls, so I was thrilled to find it, yet disappointed that the search was so difficult.

This year, I'm late getting started on shopping, but I've done the preliminary search on the toy retailers websites using the search criteria "black" or "African American/Canadian." Trust me when I say that the results are less-than-impressive.  I am worried that it's almost too late to go searching other places on the web — African art dealers, independent African toy-makers — to order gifts that I will receive before Christmas.   This frustrates me, that it is so difficult to find gifts for my daughter that represent her race and her appearance.

Now, for those of you who are not parents of trans-racially adopted children, you may be wondering what all the hype is about.  This is a good question!  For parents who are the same race as their child, or part of a bi-racial parentage, the child can look to their parent(s) for validation of their own appearance.  For those of us like Huzbo and I, who are both a different race than our child — our child cannot gaze upon our faces whenever she wants and find identity and familiarity in our looks resembling her own.   My daughter's parents' looks are a constant reminder to her that she was adopted.  Despite what strangers in the grocery store say, our daughter does not strongly resemble either one of her parents, so we must find other methods to help her develop confidence in her appearance and to identify with her heritage.

So, with all the joy that Christmas brings us, it is also sometimes a time of sadness and frustration for me, that not only can I not validate my daughter's beautiful physical attributes with my own appearance, but I also struggle to find toys for her that can play stand-in for that job.  I must work just a little bit harder to find gifts that are both fun and educational, but also meaningful and representative of my daughter's appearance.  Oh sure - I buy her lots of other gifts that have nothing to do with race or adoption, but as her parents, Huzbo and I feel a responsibility to provide these gifts, especially when she opens them and exclaims "Oh, she's black, just like me!" with pride in her voice.  It can't be easy for her, being the only black person in our family, and even black toys like her help her to feel less alone.

Ultimately, a toy industry that provides diversity would be helpful, as well.

How about you?  Do you try to buy toys that represent your child's racial or cultural heritage?  Do you find it difficult to find them?  Let me know your thoughts!

Jackie Gillard: Conceived in my Heart Twelve Things To Love/Hate

Jackie Gillard: Conceived in my Heart What Is Your Role As A Stepparent?