Nelson Mandela: His Long Walk to Freedom Has Ended

My Personal Feelings About the Modern-Day Hero 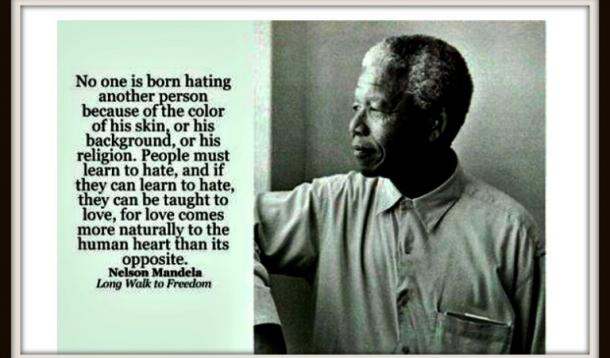 In 2009, I travelled to South Africa, filled with the barely-contained excitement of becoming a mother and meeting my daughter for the first time. What I did not anticipate was returning home with two loves — my daughter, of course — and Mr. Nelson Mandela. Prior to considering adoption in South Africa, I had a general knowledge of who Nelson Mandela was and why he was famous. What I didn't understand until travelling to South Africa was what he meant not only to South Africans, but to freedom fighters, peace activists and everyday humans around the globe.

In 1948, apartheid rule came into power in South Africa. The Afrikaans term meaning "apartness" was a legal political system for racial segregation, oppression and demoralization. As a 40-year old man, Nelson Mandela bristled at the concept of blacks and non-whites being stripped of political and economic rights and power and attempted to work peacefully to abolish apartheid until 1961, when he felt it necessary to start a military wing to counteract the increasing military action being taken against his work. Mandiba, as many South African citizens refer to him, spent 27 years in jail, most of them at Robben Island prison in a six-foot-wide cell where he slept on the floor, or doing blindingly hard labour daily in a quarry. I remember watching on TV in 1989 with the entire world as he walked out of prison and raised his fist in a victorious salute.  His political party, the African National Congress, won the next election on April 27, 1994, when all men and women of legal voting age, not just ones with white skin, were able to cast their ballot. Pause for a moment to consider — in 1994, I was twenty four years old. I could not imagine casting my ballot in an election where my non-white friends, family or coworkers could do nothing but watch. This is not ancient history studied in school — this was during MY generation. Naturally, Mandela was the first black president of South Africa and ruled for five years of very trying times.

After leaving political office, he focused on his philanthropic foundation, including working on AIDS-awareness and education, as South Africa has been devastated by the disease. He retired from public life in 2004, showing his usual good humour in his goodbye statement of "Don't call me, I'll call you."

What you can't read or can't know is the feeling of seeing his smiling or stern or pensive face looking at you from somewhere, almost everywhere you go in South Africa. To use the term "hero" would not be doing him justice, nor adequately describing the love that South Africa as a nation feels for this ordinary man who accomplished extraordinary feats. While he brought racial integration to his country and returned the rights of all people to those who had had them stolen, he also gave a much more powerful gift to South Africa and the world - hope.  Apartheid not only stripped the non-white population in South Africa from being able to vote or hold public office, or swim at the same beaches as whites, it scratched at their souls, and "Tata" — father, in Mandela's native language — restored those souls with his soothing balm of confident assurance that one day, he and all of the black men and women of South Africa, would have their rights restored, as they did.

As a man wrongly imprisoned for a third of his life at the time of his release, he could have very easily become a bitter, resentful, retaliatory man. Instead, he led his country through a truth and reconciliation process that attempted to heal very deep wounds but to also strive towards his dream of creating a "rainbow nation" that would have all colours of people living in harmony and love.

When we were in South Africa, we had the pleasure of spending a week in Cape Town. In addition to the unparalleled geographic beauty and wonders of that area, we had the opportunity to visit Robben Island. I am rarely at a loss for words, but the intensity of the experience — even four years later — seems indescribable. We toured the prison, saw his cell, stood in the quarry where many men went blind from sunlight reflecting off the white rocks. The majority of people cannot fathom the hardship of being captive, even for a crime they did commit, let alone the non-crime of expecting to have the same rights as other humans. 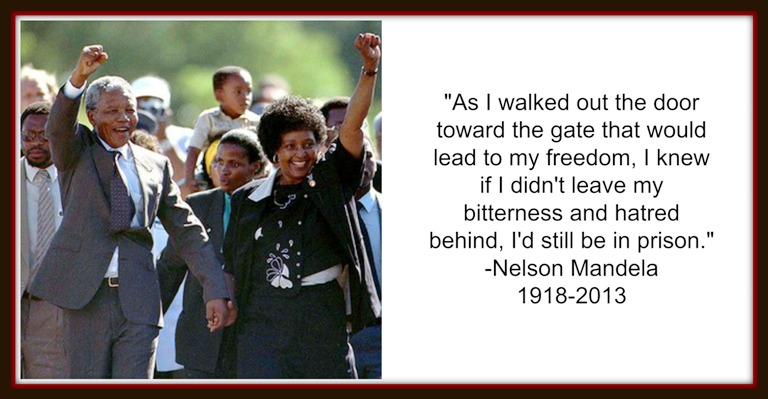 Nelson Mandela showed the world what dignity, grace, love, and commitment mean. My daughter has known from a very young age that Mr. Mandela is the most special of men to South Africa, and she knows why. I owe that much to her, and to Mandiba.

I want her to always know that he is more than a hero — he was a human with human flaws, but he refused to accept something that was not right, despite the price he had to pay for that refusal.

I can only hope my daughter will take Mr. Mandela's examples and use them as examples of who she wants to become. It holds a special place in my family's heart that a man so revered all over the world, shares the birthplace of our daughter.

We cried today in my house when we heard the news. My beautiful, strong Zulu princess and I, we cried together. My daughter did not cry because I was crying — she loves Nelson Mandela probably more than I do because she identifies with so much more of his struggles in life than I do. So, we held each other and grieved as a family. We cried for the loss of a guiding light, not only for her birth country, but for the world. We cried for the citizens of her birth country, who have lost the man, but hopefully not the spirit, of their fearless freedom warrior.  We cried for the uncertainty of South Africa in his absence, with the hopes that they will continue to model his love, peace and acceptance.  We cried for ourselves, knowing that we could never have done what he did, and knowing we could have never repaid him for it. Then, we agreed that what Nelson Mandela really would have wanted from us was an impish grin and a twinkling eye as we celebrated the legacy of his life.

As my incredibly perceptive little girl said through her tears: "I will miss him so very much."

Tata, your long walk to freedom has finally ended. 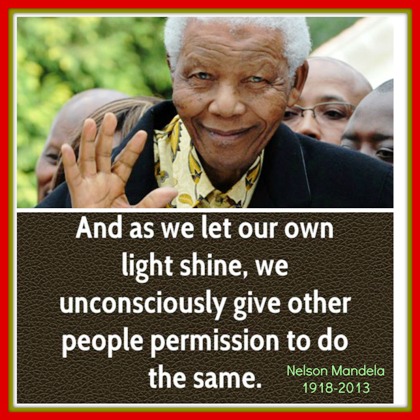 Jackie Gillard: Conceived in my Heart Newsflash: Our Daughter Is Not Our Maid

Jackie Gillard: Conceived in my Heart Who Should You Cheer For During The World Cup?