My Family Night Out to See Ross Petty's The Little Mermaid

It's a Must-Sea Theatrical Production of Fun for All Ages! 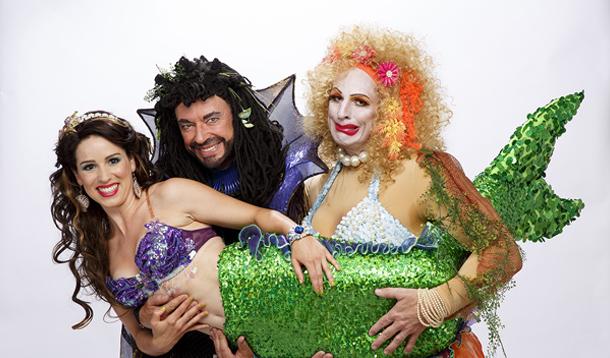 Looking for a fantastic theatre evening out with your children, your partner, your date, your friends, or even your business associates?

Ross Petty's The Little Mermaid is this season's must-sea production.

Now, if you're rolling your eyes and thinking that you get enough of that other mermaid from your kid's DVDs and toys at home, you're completely mistaken.

The Little Mermaid, playing now until January, 4, 2014 at The Elgin Theatre in Toronto, has NOTHING to do with that other fish-girl. The only similarity between her and this amazing theatre production is the inclusion of mermaids and a triton. Oh, and maybe a little cross-creature romance with a fantastic twist!

Everything about this show was fun. My family and I attended the opening night show, and I knew that my five-year-old daughter would love it, although I did prep her heavily in advance that it was NOT—thankfully for us—The Little Mermaid she was used to. I did, however, worry that my thirteen-year-old would be bored, thinking he was too cool and too male for a mermaid production.

Boy, was I wrong.

It took all of about FIVE minutes for him to be completely engaged and hanging on the edge of his seat to witness what incredible and innovative spectacle was going to happen next onstage, while belly-laughing at the jokes that he got.

He wasn't the only one.

Huzbo was beside himself with accolades for the production and how thoroughly he enjoyed himself. No, I am not married to somebody too young to buy alcohol legally; that is how well The Little Mermaid caters to every audience member, no matter what their age or taste in theatre might be. In fact, the seniors sitting behind us may have actually had more fun than my children and husband combined, if their running expressions of glee during the performance were any indication!

The entire cast is simply amazing. Ross Petty, charmingly loath-able as Ogopogo the sea monster, has produced a panto theatre event that satisfies every age. His slithery posse of eels and a spongy reluctant sidekick played by Eddie Glenn, will have the entire theatre boo'ing every time they appear onstage. Children will laugh over the antics of a funny fish, stern shrimp, and a team of high-strung mermaids. Adults will snicker at the over-the-kids'-heads sassy jokes and all ages will giggle at the shenanigans of cross-dressed character Auntie PlumBum, played brilliantly by Dan Chameroy.

Anyone who enjoys singing and dancing will be thrilled with the incredible vocal talents of Chillina Kennedy as the starfish of the show, named Angel, and her human paramour Adam, sung with passion by Canadian Idol Season One finalist Marc Devigne. The unbelievable flexibility of Jordan Clarke, winner of So You Think You Can Dance Canada, Season Four, impressed all of us.  I'm not sure if I should be worried that my daughter told me the next day that she wanted to learn to dance just like her!

Ross Petty is a Canadian icon for holiday theatre entertainment, and The Little Mermaid might just be his most fabulous production yet. For 18 years, Ross Petty Productions have given families a reasonably-priced special event to attend together during the holiday season, as well as supported the talented Canadian theatre community.

I was provided a family four-pack of tickets to see this show in order to review it, but my entertainment by every aspect of this show is not that easily paid for. I would have happily bought tickets to this rockin', rollin' party all on my own, even if I hadn't received complimentary ones; it was THAT good of a time for me and my entire family. So good, in fact, that it's all we talked about on the forty-five minute drive home, and the kids were still singing some of the catchy tunes the next morning at breakfast. My stepson actually asked us the next day if we could buy our own tickets to see the show again!

My family's sincere gratitude to YummyMummyClub.ca and Ross Petty Productions for giving us the opportunity to enjoy such a memorable family night out together!

We’ve teamed up with Ross Petty Productions to give you the chance to create a new holiday tradition with your family because this family-friendly show is a must-sea this holiday season!

Jackie Gillard: Conceived in my Heart What These Teens Did Will Bring Tears To Your Eyes

Jackie Gillard: Conceived in my Heart Are Parenting Problems Simply Part Of The Job?