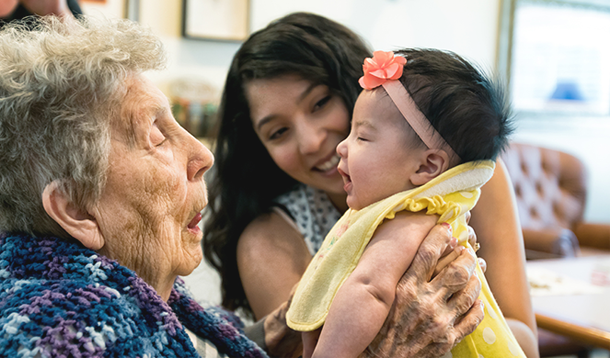 When I had my first child, no one had prepared me for the fact that maternity leave would be incredibly lonely and isolating.

After the first three months of being stuck inside with my winter baby, I realized my entire life had flipped and everything was new and uncertain to me. So I began to seek out places and people I could interact with. Drop-in centers. Parent & tot programs. Libraries. Indoor playgrounds. Being a part of the real world kept me feeling connected. Less alone.

One morning, I found myself at a drop in center program called "Family Time Intergenerational." My daughter and I hung out and played with other little kids, as well as seniors, at a seniors' home.

Truthfully, I’m sometimes pretty uncomfortable around older folks. Growing up, I never had grandparents around in my life. I never knew that intensely special relationship. Never experienced someone growing old in front of me. I don't quite know how to act, and I feel sort of awkward, bumbling and uncomfortable around people who can sometimes seem like they don't really know where they are. Who can't communicate very well.

What if I say the wrong thing? What if I’m extremely insensitive? I thought to myself.

But something about the concept intrigued me. I felt its pull. And when a woman from another drop-in center told me that it meant the world for these seniors just to watch little babies and kids play and laugh and sing, I knew I needed to be a part of it.

That day, my daughter and I joined a group of about eight seniors and four other little kids. Out of the eight seniors, only three seemed to be able to really talk. Most just sat quietly. Observing. Silent. Still.

We sat in a circle. My daughter was in my lap, clapping and singing. Happy to be out and about in her little world. At one point, we got up and walked around the circle, past each senior, stopping to wave and dance and sing. I felt more than a little bit ridiculous.

But I also realized that the woman who told me about this program really knew what she was talking about.

In that moment, I witnessed one man's bored, empty gaze change instantly. He stared into my baby’s face and then looked right at me. I watched his face light up. Literally. My stomach did a little flip as I tried to blink away my watery eyes. I smiled at him – a little embarrassed. But he was no longer looking at me. He was watching my daughter watch him. She stared and blinked. He stared and smiled back. He seemed thrilled that she was just looking at him.

Just looking at him.

We came up to a woman who was clearly unable to speak. I approached a little slowly and looked at her. She glanced at my daughter for a second before looking right into my eyes. Her eyes darted back to my little girl and her entire face softened. She stared at me for a minute – locking eyes with me. As if she was easily chatting with me, telling me how lovely my daughter was. When I smiled back at her, she almost looked relieved. I had gotten her message.

Thank you, I nodded silently. She nodded back.

I listened to one woman tell me that my daughter was just the sweetest. And I watched another woman's face shine when my baby reached out to hold her finger.

We stayed and played. We chatted and sang songs. And when we left, I felt changed. I had a heavy dose of perspective to hold onto. To remind me that my loneliness was fleeting. I would get out into the world more and more. I would one day go back to work. I would have my husband to chat with at the end of each day.

And to remind me that each and every day, I could look into the eyes of my new baby. That I had that connection with me all the time. I was very lucky.

Because that’s what we’re all looking for, isn’t it?

To be seen. To be heard. To make a connection. No matter what age we are.

RELATED: Making Friends With Other Mothers