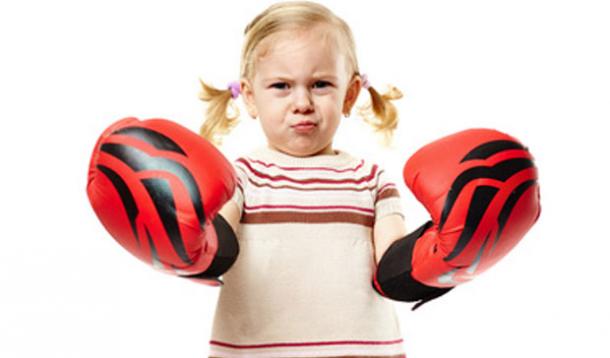 I can vividly recall a moment in my childhood when I was subjected to "relational aggression," though I'm certain it didn't have such a fancy name back then.

I was sitting at the table in my Grade 3 classroom next to two girls who I considered to be my friends. It was Hotdog Day (remember that?) and the girls were busy transforming little tinfoil pouches, which had been used to hold the hotdogs, into pencil cases. On that day, for whatever reason, those girls decided that it would be fun to leave me out. They said that I was "not allowed" to turn my hotdog holder into a pencil case. And, just to be sure that I was getting the message of exclusion loud and clear, they put their heads down under the table to talk about their pencil case-making strategy.

The craziest thing about all of this—other than the fact that they actually thought it was "cool" to transform hotdog packaging into an accessory—was that just the week before, and likely a few weeks after, these girls were, for all intents and purposes, my friends.

And while 33-year-old me can't understand why I let such immature and blatantly mean behvaiour get to me—nine-year-old me felt completely left out and totally hurt. That wasn't the first or last time that something like that would happen to me, but remarkably the image is still as clear in my mind as if it happened yesterday.

These days, according to a recent article in The Wall Street Journal, the term being used to describe this type of behaviour (most common amongst girls) is relational aggression. It's being defined as "using threat of removing friendship as a tactical weapon" or behaviour involving the formation of cliques and/or the act of intentionally excluding others.

In other words it's the stuff of "mean girls."

According to the article—Little Children are Already Acting Mean by Sumathi Reddy—this behaviour is showing up in children at a much younger age (or at least it's being noticed more now).

The article says: "I think it's remarkable that we're seeing this at younger and younger ages," said Laura Barbour, a counselor at Stafford Primary School in West Linn, Ore., who has worked in elementary schools for 24 years. "Kids forget about scuffles on the playground but they don't forget about unkind words or being left out."

She's got that right. I certainly haven't forgotten what it felt like to be left out—even after 24 years.

Back in Grade 3, I'd like to think I was emotionally mature enough to cope with what my friends were doing to me, or at least to understand, on some level, what was going on. But the fact that this behaviour is beginning when kids are as young as 3 or 4 is more shocking to me.

But this article isn't wrong. Reddy writes: "Children still in kindergarten or even younger form cliques and intentionally exclude others, say psychologists and educators who are increasingly noticing the behavior and taking steps to curb it."

Just a few months ago, my daughter who is only 4, experienced this very thing in her preschool classroom—and it really upset her. For about a month, she'd come everyday talking about the little girl in her class who was, in her words: "being mean." But they were friends. My daughter liked this girl and wanted to play with her. I actually found that my daughter would be picking out her clothes in the morning or choosing a toy to bring to school based on what this little girl might think or say about her choices. I was shocked to see all of this going on in my kiddo's head. "She's only 4, how is this possibly starting already?" I'd ask my husband. And what could I do or say when my daughter came home reporting: "That girl told me I couldn't go to her birthday party because my parents were going to lock me in my room." Seriously? Why does a preschooler know about being locked in her room and why is this something she was threatening my daughter with? How was I even supposed to respond.

The other incidents seemed more typical. "That girl wouldn't play with me today." Or "That girl said I had to be the baby when we were playing house but I wanted to be the mommy." Still, all of this was adding up and really getting to my kid. She would talk about it on the way home from school, before going to bed at night, and again in the morning over breakfast.

I tried to give advice that would be helpful.  "When that girl is being mean to you," I said, "Try to be really nice back. Maybe she's just looking for attention or love. Give her a hug and perhaps the meanness will stop." Otherwise, I advised, "don't play with her. Go play with the boys instead!"

According to this article, parental involvement is actually really important what it comes to helping kids cope with this stuff.

"A 2012 study in the journal Early Child Development and Care found that parents of preschoolers believe children should seek out adult assistance for physical aggression but not relational aggression, which they think children should work out on their own."

Thankfully, I did bring this up with my daughter's teacher and got some advice/input from her. Luckily, this whole thing has since blown over and it seems as though all the kids are playing nicely again.

Still, I'm sure that was just a taste of what's to come—especially since I have two daughters. This is something I'm really going to have to watch for. In the meantime, I believe the best thing I can do is teach my daughter to love herself and feel good enough about herself that this sort of stuff doesn't hurt so badly. I believe that self-esteem is the best weapon against meanness. In fact, self-esteem is also the best way to prevent "mean girls" from rearing their heads. The better our kids feel about themselves, the less likely they'll be to go after others.

So how do I help my daugthers grow up with a healthy dose of self-confidence? How do I help them realize that the words of "mean girls" shouldn't be taken personally; and that they are loved, no matter what?

I'm sure it was because of my parents' unconditional love and unwavering support that I got over those incidents in my own childhood and became a stronger person because of them. Not all kids are so lucky.

If you're interested in bullying you might want to read Someone is Raising The Bullies or When To Be A Tattle-Tale Parent.

Category:
Family - Kids
Tags:
mean girl
bullying
words that hurt
girls and the schoolyard
what to do when girls are mean to eachother
how to cope with mean girls in preschool
relational aggression
Wallstreet Journal
kindess
self-esteem
parenting
Hailey Eisen

Hailey Eisen: Our Happy Place Why Visiting Niagara-On-The-Lake Will Make You Happy